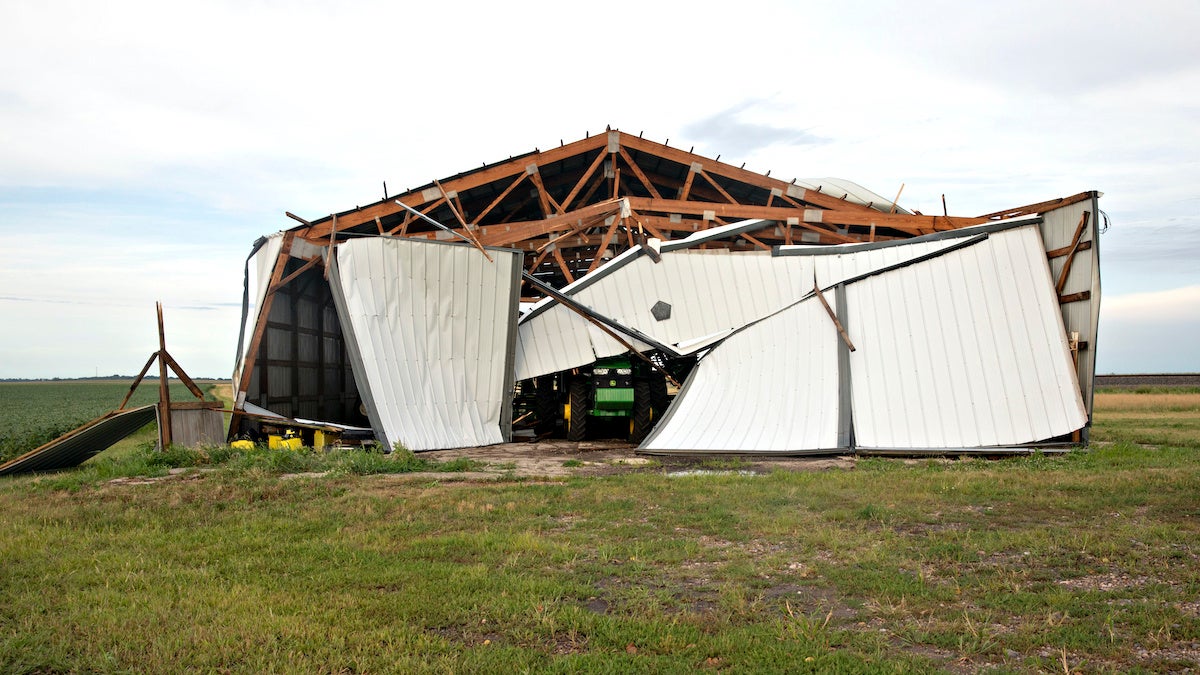 The storms, which produced winds of more than 100 miles per hour, formed a phenomenon known as a derecho, a long-lasting, far-spreading windstorm caused by a series of thunderstorms, according to the Storm Prediction Center (SPC).

“This is our version of a hurricane,” Northern Illinois University meteorology professor Victor Gensini told The Associated Press.

Who had this on their #2020 bingo card? pic.twitter.com/bcYgY36AgA

While derechos usually occur one to two times a year, they do not usually blow as hard as Monday’s storm, National Weather Service (NWS) scientist Patrick Marsh told The New York Times. He compared it to the “Super Derecho” of 2009. Gensini, meanwhile, said it would emerge as one of the strongest in recent history and one of the most extreme weather events of 2020.

Elder said the storm blew over trees and cars, downed power lines, ripped the roofs off of buildings and started fires. All told, a third of customers in Iowa were without power, according to CNN.

“Everybody in town is without power except those with a generator,” Marshalltown, Iowa Mayor Joel Greer told The New York Times. Greer declared a state of emergency for the city, which he said was still recovering from a 2018 tornado. “It hit us at a time when we were just getting back on our feet,” Greer said.

The storms entered the Chicago area around 3:30 p.m. according to NBC 5 Chicago. They downed trees and knocked out power to more than 500,000 ComEd customers.

“Much of northern Illinois has pockets of damage with downed trees, debris, and powerlines blocking roadways,” NWS Chicago tweeted.

A wind gust of 92 miles per hour was reported near Dixon, Illinois, about 100 miles west of Chicago, The Associated Press reported.

Monday’s derecho was formed by unstable, wet air that had remained over the Midwest for several days, The Associated Press explained.

“They are basically self-sustaining amoebas of thunderstorms,” Gensini said. “Once they get going like they did across Iowa, it’s really hard to stop these suckers.”

It is unclear what impact the climate crisis will have on derechos, as the SPC explained:

A warmer planet at first glance would appear to be more conducive to the development of the intense thunderstorms that comprise derecho-producing convective systems. But thunderstorm updrafts require the presence of strong vertical temperature gradients; any warming occurring at the surface likely also would occur aloft. Thus, the net change in instability due to thermal changes likely would be minimal. And, although a warmer environment implies greater atmospheric moisture content and conditional instability (instability related to the release of latent heat during condensation), all other factors remaining equal, the increased moisture likely also would yield more widespread low-level cloud cover. Such cloudiness would negatively impact storm initiation and derecho development. What is more certain is that the band of enhanced upper-level flow that encircles the planet — the jet stream — would contract poleward in a warmer world. Because derechos tend to form on the equatorward side of the jet stream along the northern fringes of warm high pressure (“fair weather”) systems, it is reasonable to conclude that the corridors of maximum derecho frequency would shift poleward with global warming.

Derechos, however, interact with other extreme weather conditions related to a warming planet. Marsh warned that the power outages could have a negative impact on vulnerable people in the region dealing with high heat. He said the power outages also compounded the problems caused by the coronavirus pandemic.