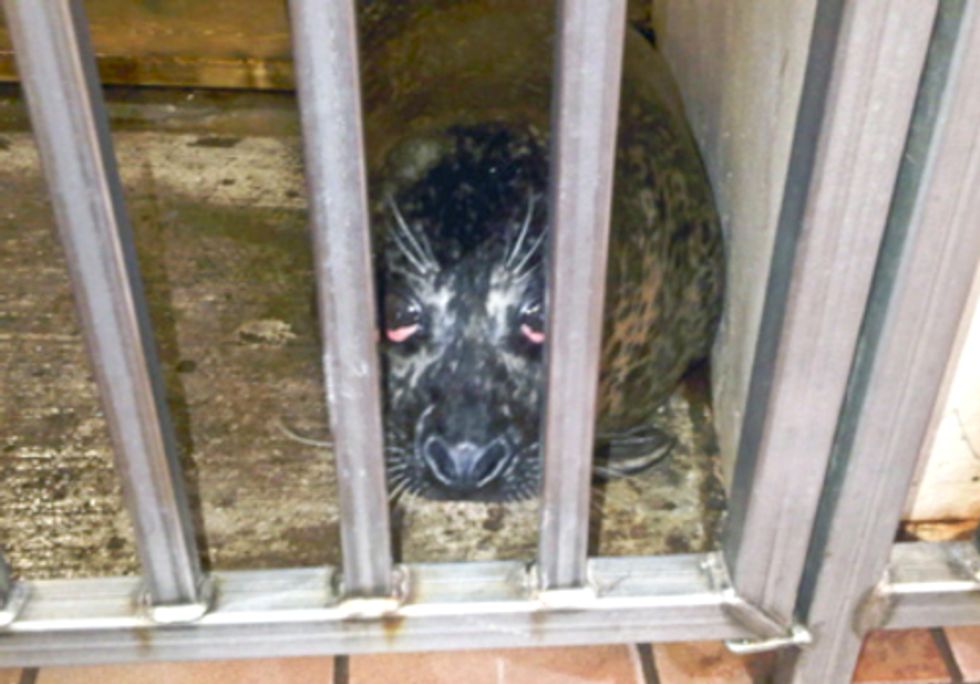 Blind seals, sea lions with ulcerated or missing corneas, and deer with open sores, tumours and over-crowded enclosures are a list of some of the attractions not advertised at Marineland Canada.

Does this sound like an attraction you would take your kids to see? If you are an employee at Marineland Canada, it’s a site you would see everyday.

Marineland Canada, a 400-acre parcel located in Niagra Falls, Ontario, has been in operation for 51 years. Its owner, 71 year old John Holer, appears to be a kind of “Boss Hogg” character in this saga as he appears to have a hold on the powers to be in Niagra Falls.

Recently an article in the Toronto Star, featuring an interview with former walrus trainer Phillip Demer, brought the issues at Marineland onto this writers desk.

In the past few months employees have quit their jobs in protest against a variety of animal health and safety conditions, and people have protested outside of this tourist attraction. Many have come forward to expose the deplorable conditions of the marine mammals and land animals. These include the Master of Ceremonies and Demer.

The most notably of these departures was Demers who worked at Marineland for 12 years. As an act of conscience Demers resigned, leaving behind his beloved walrus Smooshie. Smooshie had adopted Demers as her friend and mate at 18 months of age when she came to Marineland 8 years ago. Demers knew that if he didn’t quit and go public the abuse would go on unnoticed.

Philip Demer said he had watched as sporadic water condition problems made saltwater, which had always bordered on bad, begin to deteriorate even further, turning green and being constantly cloudy as the waste load began to increase and take its toll on all the marine mammals, burning their corneas and skin.

In fact, the water has been so bad for so long a Harbour seal named Larry has gone blind because of repeated ulcers on his cornea. This supplied picture of Larry shows him in his permanent home, a dry cell in a barn!

In 2011 and 2012 sea lions Sandy and Baker had to be removed from their pool due to extremely poor water conditions resulting in ulceration of their corneas. They too were also confined to a dry cell. In a video shot by Demer’s, both animals repeatedly plunge their faces into a bucket of fresh water and cry in pain.

Marine mammals need salt water that is 3.5 percent salinity containing trace elements and minerals found in the ocean. Marineland is almost 700 miles from any ocean and they can’t economically transport real sea water. Most seaside aquariums change their water on a weekly or continuous basis and use a variety of biological filters to naturally filter and treat waste products to make the water as close to real sea water as possible. When animals urinate and defecate it adds ammonia and nitrates to the water. As these chemical ratios rise the water becomes more like drain cleaner than sea water. Marineland staff say that water changes were almost non-existent and often they had seen water softening salt pellets used to bring up salinity instead of aquarium grade instant ocean salt.

The marine mammals are not the only animals that live in deplorable conditions. Sika and Fallow deer, whose numbers near 100, live in an asphalt and concrete enclosure with no shade and no grass for natural grazing areas. The deer wait for visitors to feed them from sugar cones filled with rabbit pellets which patrons purchase for $5. It is not uncommon for the deer to suffer sprained or broken legs from falling through the grates around their feeding areas as they are caught up in feeding frenzies.

Bears wait for tourist to throw candy and other unnatural food at them with no staff to intervene. Many bears have rotten teeth which cause major health problems aside from the obvious difficulty with eating regular food.

The substandard conditions of enclosures, living areas and housing are abundant according to Jim Hammond, the former animal supervisor who resigned his position last year because of the lack of positive changes in the treatment or conditions. Things such as overcrowding and lack of proper quarantine procedures when new animals arrived at Marineland were being ignored.

Hammond related an incident of when the park received bears and bear cubs without quarantining them resulting in the spread of Mange to the resident animals. Mange causes the bears to loose all of their fur and when it grows back it is not thick enough to keep them warm. At that time the enclosure had 17 bears and only four dens. Hammond said last year when one female had cubs they were eaten by another male bear.

It is a fact that casual brutality is commonly used when animals need to be put down. I think the most disturbing thing Hammond recalled was when a deer had broken its leg. Hammond asked Holer to call the veterinary to have the animal put down. Holer refused and simply walked to his truck, grabbed a shotgun, shot the deer in the neck, climbed in his truck and left. Unfortunately the deer did not die immediately, Holer’s shot had simply blown out the animal’s windpipe. When Hammond called Mr. Holer at home Holler angrily responded, “I am at home and just sat down!” When Hammond asked Holer for permission to call in the veterinary to put down the animal Holer said, “You have a knife in your truck, do your job!” It was a regular occurrence for Holer to shoot injured animals rather than have a veterinary euthanize them humanely.

Overseeing Marineland through all of this is Canadian Association of Zoos and Aquariums (CAZA) the industry body that is supposed to monitor and license its members has always given Holer, a green light to operate. It has also allowed many other deplorable roadside zoos to operate until media attention put the ugly truths on center stage, such as Gazoo Game Farm in Alberta which finally had its doors closed by the province and the SPCA after a provincial inspection found a multitude of animal health and treatment issues. Many people involved in this issue feel CAZA’s oversite is like letting a fox watch the chicken coup.

The Niagara Falls Humane Society said Marineland’s animals are perfectly fine and the attention is simply sour grapes from employees who quit. The humane society, I should add, is located in a building donated by Holer and Marineland.

In recent weeks CAZA and the Niagara Falls Humane Society have given Marineland a clean bill of Health as usual. The Ontario Society for Prevention of Cruelty (OSPCA) gave 2-weeks notice they would be coming to inspect Marineland. Sources inside Marineland say Holer went into damage control and clean-up mode prior to the OSPCA arriving. Even the veterinarian who works for Marineland has been on television confirming that everything is ok. However, in checking with the Ontario College Of Veterinarians, Dr. June Mergl is not a certified Marine Mammal Veterinarian or a wild animal vet. Her certification lies in general veterinarian services only.

At present British Columbia is the only province that has regulations governing the keeping of non-resident species. Ontario’s government doesn’t seem to want to wade into the issue. Ontario's Premier Dalton McGinty performed a verbal tap-dance around the issue when he was questioned in the Legislature.

While the OSPCA tip-toes through the PR minefield, more animals suffer and die in the name of profits and tourism.