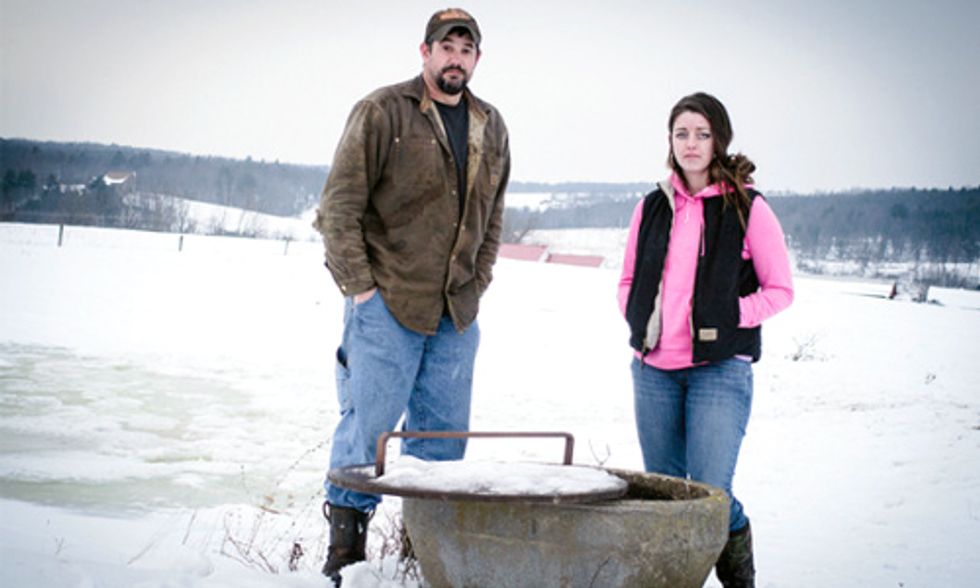 By Joshua B. Pribanic

It’s day one and Christine Pepper’s family has no water. There’s no water for the family to drink, to shower or wash their clothes so they’re making calls to inlaws and saving single gallon plastic jugs. It’s day one, and the Pepper family has 45 days until they know what’s happened. It started when Christine splashed water on her face from the kitchen faucet and a burning sensation shot through her skin. “It felt like my face was on fire for 20 minutes,” she said. Later red bumps developed. Not shortly after there was no water at all. The Pepper's spring-fed well, which had produced water for more than 50 years, went completely dry.

“I’m not saying we’ve never had low water," explains Christine’s husband Cory, "but it always comes right back, but it’s stayed dry for two weeks. And ... I’ve never seen it! I’m 42, I’ve lived here 42 years, and my Dad was 18 when he bought this house.”

Cory and Christine Pepper stand at their spring water well in Leroy Twp. in Pennsylvania after looking for water in their well after it recently went dry for the first time. photo: jbpribanic

The Peppers live on Southside Road in Leroy Twp. Bradford County, where Public Herald reported on drinking water problems in the documentary Triple Divide. The Pennsylvania Department of Environmental Protection (DEP) has pending Gas Migration Investigation (GMI) cases throughout the area, with Leroy Twp. being famous for two GMI’s in the last three years: the Atgas 2H well blowout in April 2011, and the Morse 5H well subsurface problems in 2012. Both wells are within three miles of each other.

Cory and Christine Pepper live 1,000 feet from the Morse 5H well and 3 miles from the Atgas 2H well, each operated by Chesapeake Energy Corporation.

According to DEP, the Morse 5H well is currently in “inactive status” due to regulatory procedures. But, there’s a second well on the pad—the 3H—which the Peppers were told was put into production the same week their well went dry. “They opened up the [3H] well and the next day we have problems,” told Cory, who happens to work locally for the gas industry but has been skeptical that fracking had anything to do with stories of water contamination in the area.

The phrase “opened up” is another way of saying the gas well went “on line” or into production. Essentially, the company pulls a plug and the gas is released, ready to go to market. When Cory saw his family’s spring dry up, and found out that the 3H well had been put online, he and Christine did the only thing to do; they called DEP to submit a complaint. Once a homeowner submits a drinking water complaint the Department has 45 days to make a determination about whether oil and gas activities have impacted the water supply. The complaint gets a number, the Pepper’s is #302587, and day one for DEP starts on the receipt of the complaint. But it’s hardly ever cut and dry. Christine talked to DEP on a Friday but as Cory puts it, “They told her it was an inconvenience for them to come out and test it on a Friday. So, they came out Tuesday [Feb. 11]. That was day one with DEP.”

The Pepper family living next to the Morse well pad. photo: jbpribanic

As Christine recalls, “DEP came that day [Tuesday] and told me that bare minimum it would be 45 days to several years before they come up with a conclusive decision. And the one gentleman told me that it was highly unlikely it had anything to do with the drilling over there.” The Pepper family is no stranger to DEP or impacts from fracking. Christine’s mother is Carolyn Knapp, and Carolyn has spent years educating Bradford County about the impacts from drilling while criticizing DEP for how they handle water complaints. So since this isn’t Carolyn’s first water rodeo, Christine had her mother act as the liaison for her complaint.

To see all of the Bradford County complaint files visit Public Herald’s new #fileroom website. Carolyn knows about these complaints, “The neighbors have had … ” Christine interjects, “black water, no water, methane water.”

Now that Christine is having to communicate with DEP she’s beginning to experience the stories her mother talked about. “I felt like they were questioning my integrity. DEP made me feel like I was wrong for believing [the well pad] has anything to do with it. And said if I wasn’t going to cooperate they weren’t going to help me … completely disregarding the fact that I have no water.”

Chrisinte Pepper stands next to empty gallon jugs once filled with drinking water to replace the water she believes was lost because of nearby fracking. photo: jbpribanic

Herein lies one part of the problem with complaint investigations: DEP's discriminatory attitude and treatment of citizens who report water problems. As Carolyn explains, "A lot of other people would say forget about it, and it’s not worth the hassle.”

“There should be a provision in the law that requires them to supply water,” says Carolyn. “They don’t understand for 45 days what it’s like to live out of a bottle.” But there is a provision. Pennsylvania Act 13 provides the “presumption of liability” clause under section 3218 which holds the industry liable for supplying water to nearby complaints and gives DEP 45 days to conduct and complete an investigation.

“Operators found to have impacted a water supply within the time and distance provisions of the presumption of liability must supply temporary potable water until the supply is restored or replaced.” (DEP)

However, DEP personnel changed the meaning of the law and told Carolyn in an email that the Department cannot provide Christine water and the presumption of liability only applies once DEP makes a determination before or after the 45 days.

Then on Feb. 28, Department personnel Jennifer Means sent Carolyn another email stating that DEP can require a company to provide a temporary water supply on day one of the complaint under the presumption of liability, but only for complaints of pollution.

But Carolyn never questioned the need for sampling of the water supply. She questioned how it could be done if there was no water. Carolyn told DEP on day one of the complaint that the problem was both pollution and diminution.

Means emphasized to Carolyn how the department has no evidence leading them to believe the Morse gas well could of caused Pepper’s water complaint. Chesapeake Energy made the same statements in a separate email.

Yet Public Herald uncovered documents that the Morse well has a dangerous history which the department is fully aware of but chose to ignore as evidence. Recently, the Leighton family who live near the Peppers, sued Chesapeake Energy for drinking water contamination related to the Morse 5H well. Their case references some of these problems:

The Morse 5H well is also responsible for blowing out and impacting a creek down the road on Tim Pepper's farm [Cory's brother], an incident documented in Triple Divide. With the Leighton’s case, Tim Pepper’s creek blowout, and other incidents happening within the past two years, DEP has evidence on the Morse well for the presumptive clause. But, instead they’ve left the Pepper family without water and manipulated the law.

“If they took care of the landowners and the local people you’d be so much further ahead, but they won’t. And that’s what pissed me off,” Cory protests. If the Peppers water supply turns out to be safe to drink, it doesn't restore their trust in the department or Chesapeake Energy. For complaint #302587 Christine affirms, “It’s not just my life I’m concerned about; it’s their life.”