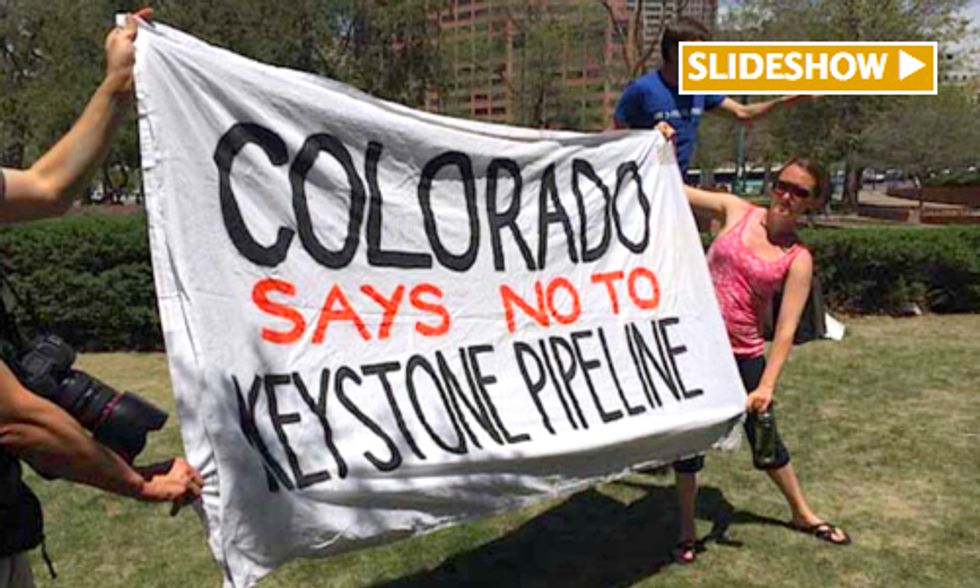 [Editors note: On Tuesday, May 6, 350 Colorado organized and hosted an anti-Keystone XL rally calling on Sen. Udall (D-CO) and Sen. Bennet (D-CO) to join with them in their fight against the pipeline. With only 72 hours to get the word out, the action was a great success— almost 150 people turned up to show their support of a Keystone XL pipeline veto. Campaign organizer Katie Falkenberg sums up the day of action below.]

We started the morning with a rally in support of expanding Demand Side Management (policies that aim to reduce energy consumption through energy efficiency) with Frack Free Colorado, Sierra Club, Clean Energy Action. We wanted to get the message out across that Colorado needs affordable solutions for converting to renewable energy and Demand Side Management is the best answer. We knew Gov. Hickenlooper (D-CO) was across the street and we hope he got the message loud and clear that expanding DSM is crucial to combating climate change and protecting the environment.

Next, we gathered up our banners, signs and mock pipeline and marched all the way from the Capitol to Sen. Udall’s office where another mini rally commenced featuring some amazing speakers. I was blown away by the amount of people waiting for us at his office when we arrived—well over a hundred people were there.

What Will Bennet Do?

When we went to deliver the letters and signatures to Sen. Udall’s staff they seemed to be a bit unprepared. With a big Senate race against a Republican with a strong pro-petroleum stance, we know he could swing either depending on the cash flow. We made sure to send Sen. Udall's staff a strong message that no matter how much money gets pumped into the senate race, Colorado stands strongly against the Keystone XL pipeline.

The march continued on to Sen. Bennet’s office, back through the 16th Street mall, complete with chanting and singing. No doubt, we had the attention of everyone within eye and ear shot. A huge thanks to Jonny 5 of the Flobots for leading us and keeping the crowd momentum up. We couldn’t have done it without him.

Again, we were met with a promise to deliver our message to the Senator, who was believed to be heading to Washington this week for a crucial Keystone XL Senate vote. Bennet has in the past said he is in favor of the pipeline, but as of last week he was still undecided on his vote for this issue. He has stated in the past:

350 Colorado has heard that Sen. Udall will likely vote against the bill. It appears the tide could be turning against Big Oil. Sen. Bennet is one of the last undecided members of the Senate. It’s time he do what’s right for Colorado and the climate, and vote against the pipeline.