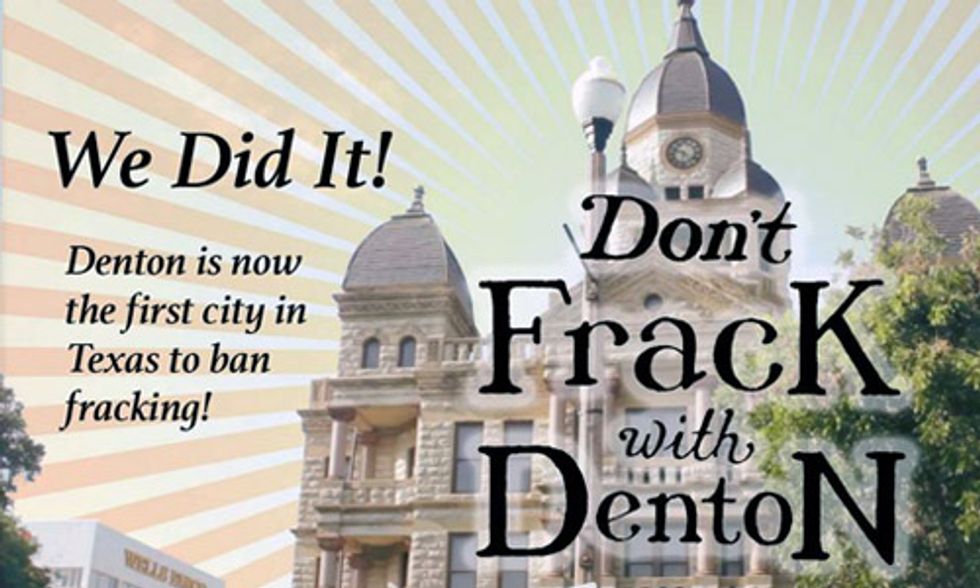 On Nov. 4, Denton, Texas, became the first city in the state to ban the process of fracking when 59 percent of voters cast ballots in favor of the initiative. It did so in the heart of the Barnett Shale basin, where George Mitchell—the “father of fracking”—drilled the first sample wells for his company Mitchell Energy.

On Nov. 4, Denton became the first city in Texas to ban the process of fracking when 59 percent of voters cast ballots in favor of the initiative.

As promised by the oil and gas industry and by Texas Railroad Commission commissioner David Porter, the vote was met with immediate legal backlash. Both the Texas General Land Office and the Texas Oil and Gas Association (TXOGA) filed lawsuits in Texas courts within roughly 12 hours of the vote taking place, the latest actions in the aggressive months-long campaign by the industry and the Texas state government to fend off the ban.

The Land Office and TXOGA lawsuits, besides making similar legal arguments about state law preempting local law under the Texas Constitution, share something else in common: ties to former President George W. Bush and the Bush family at large.

In the Land Office legal case, though current land commissioner Jerry Patterson signed off on the lawsuit, he will soon depart from office. And George Prescott Bush—son of former Florida Governor and prospective 2016 Republican Party presidential nominee Jeb Bush and nephew of former President George W. Bush—will take his place.

George P. Bush won his land commissioner race in a landslide, gaining 61 percent of the vote. Given the cumbersome and lengthy nature of litigation in the U.S., it appears the Land Office case will have only just begun by the time Bush assumes the office.

The TXOGA legal complaint was filed by a powerful team of attorneys working at the firm Baker Botts, the international law firm named after the familial descendants of James A. Baker III, a partner at the firm.

The Energy Policy Act of 2005, which exempts the oil and gas industry from the Safe Drinking Water Act, the Clean Water Act and the National Environmental Policy Act for fracking, is seen by critics as the legacy of ashes left behind by the George W. Bush Administration.

Yet almost a decade later, the two lawsuits filed against Denton show the Bush oil and gas legacy clearly lives on and stretches from the state where the fracking industry was born all the way to Iraq and back again.

Besides sharing blood as father and son, Jeb Bush and George P. Bush also operate inside the world of fracking finance.

Jeb works at the firm Britton Hill Holdings LLC, while George Prescott works at St. Augustine Capital Partners and served a short-lived stint on the board of directors of the Midland, Texas-based fracking exploration and production company, Arbella Exploration from February through September.

“Its first investments have been tied to the exploitation of shale oil and gas in the U.S.,” explained an article in Bloomberg. “Britton Hill raised more than $40 million for its first fund in May 2013, according to a private placement notice filed with the SEC at the time.”

Britton Hill has investments in a company fracking in the Marcellus Shale basinand another that owns a fleet of gas carriers seeking to export U.S. propane to Asia. Mitch Jones, common resources director for Food & Water Watch, wrote a blog post critical of Jeb Bush and Britton Hill the day the Bloomberg article came out.

“These relationships, where politicians move between Washington and Wall Street, between government and finance and resource exploitation, is another reason why we need to get money out of politics,” wrote Jones. “It’s these sorts of relationships that corrupt our system and provide the permanent political-business elite with their hold on our government.”

The critique promulgated by Jones about Jeb Bush could just as easily apply to his son, who recently said his father is “more than likely” to run for president in 2016.

According to multiple press accounts and an independent DeSmogBlog review of Texas campaign finance data, George P. Bush took hundreds of thousands of dollars from the oil and gas industry in his land commissioner electoral race. He also received the endorsement of the Texas Oil and Gas Association's political action committee, the plaintiff for the other lawsuit.

“George P. Bush fully appreciates the role a strong domestic energy industry plays in ensuring our state and our nation’s prosperity and security,” Robert L. Looney, president of the Texas Oil and Gas PAC stated in endorsing him. “Mr. Bush is committed to advancing public policy that ensures Texas oil and gas producers can power our state forward and create good-paying jobs.”

“St. Augustine has participated in partnerships with seasoned operators to develop drilling programs in the Marcellus and Permian Basins, in addition to offering financial advisory services for those opportunities,” St. Augustine explains.

The firm also “has worked closely with” the Texas Railroad Commission, according to its website.

In the months leading up to the Denton vote, the Railroad Commission situated itself as the industry's go-to spin machine in the attempt to discredit activists fighting for a fracking ban. Railroad commissioner David Porter, who formerly worked as an oil and gas industry accountant, was also one of the first entities out of the block to say an affirmative ban vote in Denton would receive ruthless contestation by the Texas government.

Serving as land commissioner in Texas is often a resume padder before running for governor, an article about George P. Bush published in GreenWire explained.

“[The] Texas land commissioner [is] a powerful post that controls the state's oil and gas contracts,” the article explains. “Every land commissioner in the past three decades has gone on to run for lieutenant governor or governor.”

Baker Botts: From Texas to Iraq and Back

One of the co-counsel for Baker Botts in its lawsuit against the City of Denton is Evan Young, part of a powerful legal cadre that includes former Texas Supreme Court Justice Thomas Phillips. Phillips testified in front of the Denton City Council in July in opposition to the Denton fracking ban proposal on behalf of TXOGA (see video below, starting at 6:25).

According to his Baker Botts biography, Young formerly clerked for the conservative U.S. Supreme Court Justice Antonin Scalia and worked as legal counsel in the Office of the Attorney General under Attorneys General Alberto R. Gonzales and Michael B. Mukasey from 2006 through the end of the presidency of George W. Bush.

“While on the Attorney General’s staff, he accepted a detail to the U.S. Embassy in Baghdad, Iraq,” explains his Baker Botts biographical sketch, “where he was the Deputy Rule of Law Coordinator. In that position he worked to assist the Iraqi government in its efforts to strengthen its legal regime.”

Among the legal regimes Baker Botts helped create while Young was still working for the U.S. Department of Justice was one helping oil flow out of the ground in occupied Iraq and into the U.S. As of 2012, the U.S. is one of the world's biggest importers of Iraqi crude, according to the U.S. Energy Information Agency (EIA).

An article published by American Lawyer in 2007 explains that Baker Botts helped cut a controversial legal deal between Hunt Oil and the Kurdish Regional Government (KRG).

That deal gave Hunt the right to explore oil in Kurdistan, the first U.S. company given the green light to do so. The Iraqi Constitution that the U.S. helped write says making such a move is illegal.

“Not only was the deal made in a war zone, but Iraq is still working on oil resources legislation,” wrote American Lawyer. “Under the October 2005 Iraqi Constitution, local oil is owned by 'the Iraqi people.' “

Ray Hunt, CEO of Hunt Oil Company, gave George P. Bush $25,000 for his campaign according to Texas campaign finance data. And the Baker Botts Amicus Fund gave him $2,000 worth of donations, with Young and Phillips each donating $500 to get George P. Bush elected.

In late July, Iraq's Oil Ministry launched a lawsuit against the Kurdish Regional Government in a U.S. District Court in Houston for what it says is a million barrels of illegally stolen oil exported out of Kurdistan—which is still sitting on a tanker called the United Kalyvryta 60 miles off the coast of Texas in Galveston Bay.

The Oil Ministry pointed to the Iraqi Constitution in its lawsuit as the legal precedent.

In March 2014, just months before the Iraqi government brought the lawsuit, Baker Botts published a legal memo on the legal and geopolitical ramifications of Kurdish oil exports.

Though Baker Botts cited the Texas Constitution in its lawsuit against the City of Denton, the Iraqi Constitution was disposable for the firm and its client Hunt Oil when it came to procuring oil exploration and exportation rights in Kurdistan.

Baker Botts' counsel also seems to have brushed aside concerns by both the U.S.and Iraqi government that the extra legal maneuvering for oil exploration and production rights in the area would create regional instability, the blowback of which is now visible in the form of the ascendant and lethal Islamic State.

Further, Sharon Wilson, an organizer for Earthworks—an environmental group that campaigned for the fracking ban in Denton—pointed to a quote from George P. Bush back in October. “Enough … big government solutions to our problems,” George P. Bush said at an October event his father Jeb Bush also spoke at.

“Denton residents, not politicians, directly spoke in overwhelming numbers that they don’t want fracking in their city,” Wilson told DeSmogBlog. “Overturning the will of the people by government fiat is the very definition of big government. George P. is going to have to put his money where his mouth is or decide if his mouth is where his money comes from.”