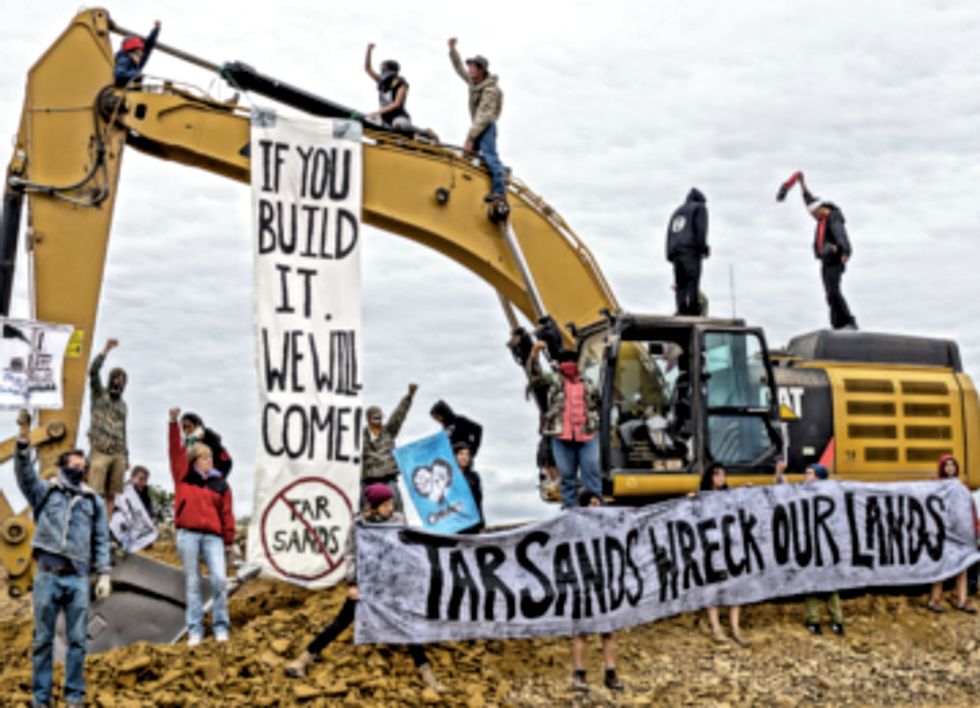 Dozens of individuals peacefully disrupted road construction yesterday, stopping operations at the site of a proposed tar sands mine in the Bookcliffs range of southeastern Utah.

Early yesterday morning, Utahns joined members of indigenous tribes from the Four Corners region and allies from across the country for a water ceremony inside the mine site on the East Tavaputs Plateau. Following the ceremony, a group continued to stop work at the mine site while others halted road construction, surrounding heavy machinery with banners reading “Respect Existence or Expect Resistance” and “Tar Sands Wrecks Lands.”

“The devastating consequence of dirty energy extraction knows no borders, and we stand together to protect and defend the rights of all communities, human and non-human,” Stock said.

Monday’s events are the culmination of a week-long Canyon Country Action Camp, where people from the Colorado Plateau and across the nation gathered to share skills in civil disobedience and nonviolent direct action. Utah’s action training camp and yesterday’s action are affiliated with both Fearless Summer and Summer Heat, two networks coordinating solidarity actions against the fossil fuel industry’s dirty energy extraction during the hottest weeks of the year.

Lock-downs in combination with mobile blockades were used to enforced a for a full-day work stoppage at Seep Ridge Road. Photo credit: Peaceful Uprising

“Impacted communities are banding together to stop Utah’s development of tar sands and oil shale," said Camila Apaza-Mamani, who grew up in Utah. "We stand in solidarity because we know that marginalized communities at points of extraction, transportation, and refining will suffer the most from climate change and dirty energy extraction.”

US Oil Sands, a Canadian corporation, has received all the required regulatory permits to mine for tar sands in the region, and could scale up operations within a year. Although preliminary work has already begun, the company still lacks the necessary investment capital for the project. Yesterday's actions and the lawsuits filed last week pose new challenges to the company’s plans, and those of other corporations exploring tar sands and oil shale plays on the Colorado Plateau, such as Red Leaf Resources and Enefit.

Currently, tar sands from mining operations in Alberta, Canada are being refined in Salt Lake City by Chevron Corporation. As the refining industry in Utah seeks to expand, communities alongside the refineries already suffer from adverse health impacts and according to a recent study, Salt Lake City boasts the worst air quality in the U.S.

“The networks of groups and individuals taking action today in Utah have come together in an alliance that is historically unprecedented for this region," said Lauren Wood, a seventh generation Utahn and third generation Green River outfitter. "We join with others around the world, forming a coordinated response to these threats to our air, water, land, communities and to the larger climate impacts of this dirty energy development model.”

Utah’s School Institutional Trust Lands Administration (SITLA), the agency leasing the land for tar sands mining to US Oil Sands, is tasked with administering state lands for the benefit of public institutions such as schools.

“Tar sands strip mining would be worst thing for the state, this country and the world," continued Stock. "Although SITLA professes to care about the children, it consistently puts short term economic gain over the long term health of the very children it professes to benefit.”

“There are no jobs on a dead planet. We need heroes not puppets of corporate interest who steal from current and future generations to line the pockets of a greedy few, at the expense of our communities and our environment,” Stock concluded.

Groups have vowed to continue their efforts to protect the Colorado River System and are planning future demonstrations and actions to stop the tar sands strip mining and other “dirty energy projects” across the region.