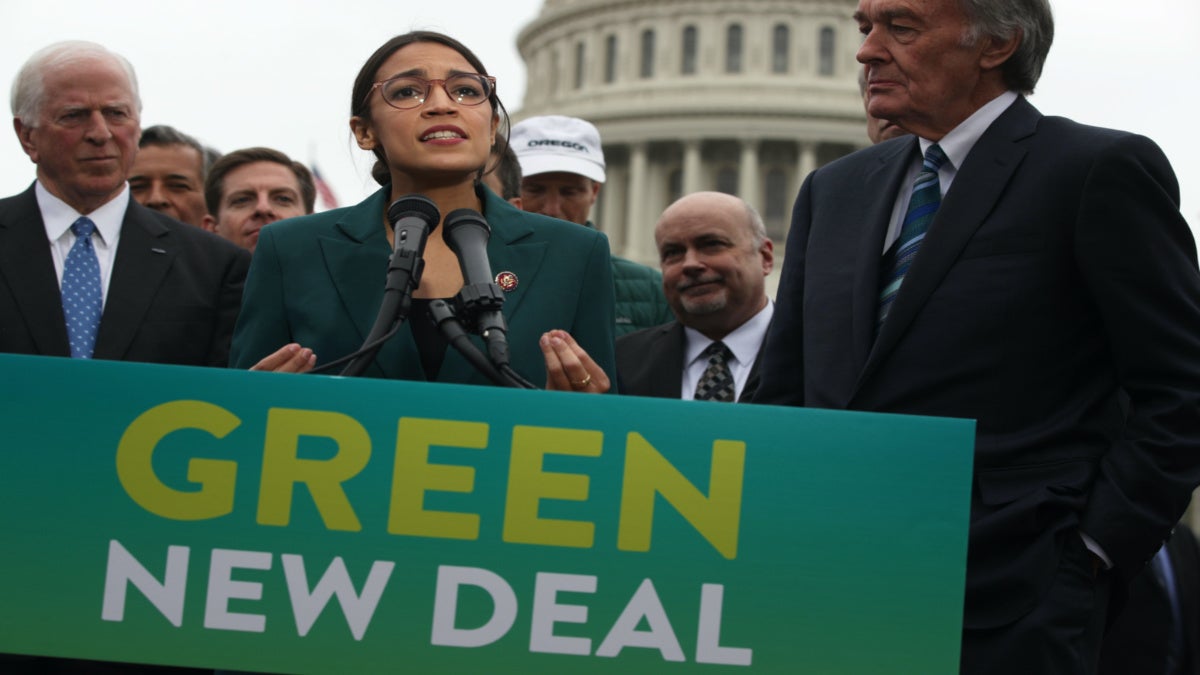 For all its posturing on climate change, the Democratic Party has long been weak on the actual policies we need to save us from extinction. President Barack Obama promised his presidency would mark “the moment when the rise of the oceans began to slow,” and then embraced natural gas, a major driver of global temperature rise, as a “bridge fuel.” Climate legislation passed in the House in 2009 would have allowed industries to buy credits to pollute, a practice known to concentrate toxic air in black and brown neighborhoods while doing little to cut emissions.

Even this year, with interest in the issue at an all-time high, the candidates the Democratic Senatorial Campaign Committee endorsed — like Amy McGrath, who eked out a victory in Kentucky’s Senate primary, and former-Governor John Hickenlooper, who handily won Colorado’s — have evinced skepticism about the Green New Deal, a resolution pending in Congress to put trillions of dollars into a transition to renewable energy plus job-training for a new clean economy.

On June 4, however, when the Democratic National Committee’s Environment and Climate Crisis Council released a rigorous set of proposals for the party’s 2020 platform, it offered climate voters some hope. The 14-page document’s solutions for the warming planet included investment in communities that suffer every day with the consequences of industrial waste, shoring up public health services and making sure everyone has enough to eat. It also advises changing the structure of the society that allows police to kill unarmed black people with relative impunity.

“There’s just no way to address the climate crisis without taking on systemic racism,” says Michelle Deatrick, chair of the council. “They’re intertwined and integrally related.”

But proposals are not a platform; they don’t represent any official statement of purpose from the DNC on climate or anything else. The climate council, founded in August 2019 after party members failed to persuade Chairman Tom Perez to hold a climate debate, is but one of three groups involved in crafting the party’s final climate policies. Another, the eight-member Biden-Sanders Climate Task Force, will offer recommendations from the likes of New York Rep. Alexandria Ocasio-Cortez and environmental justice leader Catherine Coleman Flowers. Then it’s yet another committee that will draw up the actual climate platform with former Vice President Joe Biden, the party’s presumptive nominee.

On its face, that process looks reasonable: A task force and a council inclined to progressive ideals will push the ultimate deciders to take bigger steps toward a zero-carbon future. The problem, Deatrick says, is that once the platform has been agreed upon by that final, 15-member committee, it rarely changes when it goes before the full committee for approval.

“It’s mostly a formal vote,” she says. The state and local officials in the DNC, despite the crucial knowledge they bring from their jurisdictions, “historically have had no impact on the final product.” But this year, with its great convergence of catastrophes that have defined the spring and summer of 2020, has to be different. “We need to have an inclusive and transparent process around the creation of the platform,” Deatrick says. “This is a great opportunity for Democrats to show that we are the party of listening and deep considerations of ideas.”

Among those ideas is that none of the problems we’re facing can be disentangled from the others. “The nature of environmental problems is bound up in the history of race in America,” says Adrien Salazar, senior campaign strategist for climate equity with the social-justice think tank Dēmos. “The only way that [polluting] industries have been viable at all is because there are communities where they can pollute, places that have ended up being the sacrifice zones for the rest of America.”

Robert Bullard, the author and researcher often called “the father of the environmental justice movement,” has found that toxic hot spots across the U.S., from Louisiana’s “Cancer Alley” to the refinery rows of Texas, align closely with Jim Crow housing segregation and other discriminatory zoning practices. “America is segregated,” he says, “and so is pollution.”

The injustice bleeds into public health and disease transmission: The COVID-19 virus travels, scientists hypothesize, on the sooty particles that blight communities on the front lines of industrial pollution. Those same places emit the greenhouse gases warming the atmosphere. In other words, it’s not just pre-existing conditions causing the disease to hit harder in black communities. It’s literally the air people breathe.

There are people tasked with air-quality regulation who argue that the common air contaminants that make people sick – the ground-level ozone that irritates lung tissue, the particulate matter that triggers cancer – belong to a different category than the greenhouse gases that trap the earth’s heat. Mustafa Santiago Ali, vice president of environmental justice, climate and community revitalization for the National Wildlife Federation, remembers hearing as much during the 24 years he spent at the U.S. Environmental Protection Agency. “I’ve had these conversations with some of the best scientists in the world,” he says. “And what I know is that it is impossible, impossible, to hit the numbers that we need to hit to win on climate change if you’re not focused on environmental justice.”

Fossil-fuel infrastructure, for instance, blights “lower-wealth communities,” Santiago Ali says. “So if you focus on that, you’re going to begin to minimize the impacts of oil and gas.” Pipelines cut through indigenous land in the Midwest and end up on Louisiana’s Gulf Coast. “If you stop those pipelines, you stop the climate-killing export of oil.”

Cars and trucks drive global warming, too, and their proliferation is made possible by “policies of running highways through certain communities, moving wealth into certain communities and dropping off pollution in lower-wealth communities along the way.” Writer Peter Simek has noted that you can find the locations of Dallas’ Freedmen’s Towns — communities established by emancipated slaves during and after the Civil War — by following the highways engineers built on top of them. “Some of the most powerful planners in America were forthright about their intention to use their power as transportation engineers to rewire a society built on racial and economic segregation,” he wrote.

If you stop dehumanizing people in order to pollute, you stop degrading the environment, Santiago Ali says. If you don’t, we literally won’t survive. “There’s no way of pulling climate out and saying, ‘We’re going to win on this but not focus on any of these other issues,” he says. “That’s just bad arithmetic.”

Whether the platform committee does better math depends on how well it responds to outside pressure: The group is diverse, but not necessarily progressive. (Journalist Emily Atkin in her newsletter Heated has broken the group down in a useful spreadsheet.) Fear surrounds this election — fear that pushing too hard on climate and racial injustice both will alienate white voters of the Rust Belt; fear that people will equate an expensive clean energy transition with the loss of jobs in oil and gas. Cecil Roberts, president of the United Mineworkers Union, told Reuters that the circulation of the climate council’s policy recommendations “has already cost Democrats potential votes in places like Pennsylvania, Ohio and Michigan.”

Deatrick, who in addition to her environmental work is a longtime union supporter from Michigan, isn’t worried. “We have to walk the talk,” she says. “We have to make sure that we commit to policies that support those workers, replace pensions, provide health care.” What she’s learned on three months of listening tours around the country is that people are less afraid of economic transitions than they are of the chaos a changing climate will bring.

“We have a real opportunity to reinvigorate the part of the electorate – which is the vast majority of Democrats and Independents as well – who rate the climate crisis among their top priorities,” Deatrick says, along with health care and racial inequality. She wants to make sure that when the draft of the climate platform is drawn up, those people are heard. The DNC “has not laid out what that listening process will be,” she says. “And we don’t have much time left.”

This story originally appeared in Capital & Main and is republished here as part of Covering Climate Now, a global journalism collaboration strengthening coverage of the climate story.