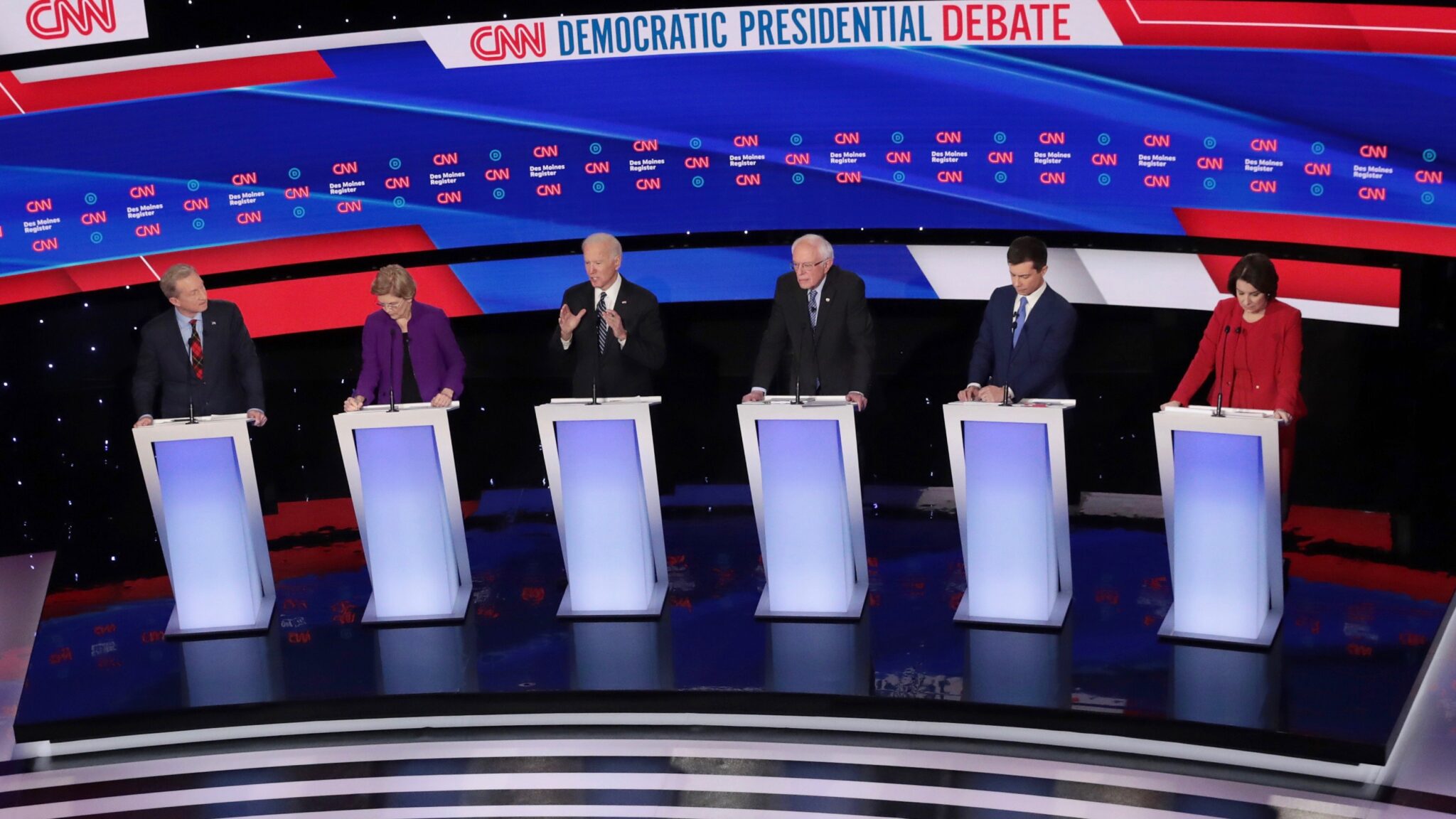 Six Democratic presidential candidates squared off Tuesday night in Des Moines, Iowa for the seventh primary debate of the season and the last before voting begins with the Iowa caucuses Feb. 3. The climate crisis tied with health care for the No. 1 issue important to Iowa voters when choosing a candidate, according to the latest Des Moines Register/CNN/Mediacom Iowa Poll. So how much attention did it get during the debate?

A fair amount, Grist reported. While CNN and Des Moines Register moderators didn’t bring it up until the last half hour, the candidates themselves incorporated it into their answers early and often.

“Debate moderators may take ages to get around to climate change in these debates,” Zoya Teirstein wrote for Grist, “but the candidates have gotten increasingly adept at weaving the issue into their answers to other questions. This time around, Wolf Blitzer, Abby Phillip, and the Register’s Brianne Pfannenstiel could barely keep a lid on the climate action in the first half of the debate.”

10:39pm on the east coast, people are tuning out, parents are tucking their kids into bed…@CNN: "Alright, let's turn to the existential crisis of our time!"

And the @DNC doesn't get why we wanted a #ClimateDebate? #DemDebate

So how did the candidates stand on various climate-related issues?

The first climate mentions came in response to the first question, about which candidate was best prepared to be commander-in-chief.

Both former South Bend, Indiana Mayor Pete Buttigieg and Sen. Elizabeth Warren (D-Mass.) listed the climate crisis among new national security issues they would tackle as president, according to a transcript provided by the Des Moines Register.

Philanthropist Tom Steyer brought up the wildfires in Australia when asked how he would use military force as a president, suggesting that the climate crisis might require large international mobilizations.

“[T]here’s a gigantic climate issue in Australia, which also requires the same kind of value-driven coalition-building that we actually should be using in the Middle East,” he said.

The next time the candidates brought up climate was during the discussion of a new trade deal struck by President Donald Trump with Mexico and Canada. Sen. Bernie Sanders (I-Vt.) came out strongly against it, largely because it does not mention climate change.

“[E]very major environmental organization has said no to this new trade agreement because it does not even have the phrase ‘climate change’ in it. And given the fact that climate change is right now the greatest threat facing this planet, I will not vote for a trade agreement that does not incorporate very, very strong principles to significantly lower fossil fuel emissions in the world,” he said.

Democratic lawmakers had pushed for a commitment to the Paris agreement to be included in the deal, but that did not make it into the final draft, The New York Times pointed out.

Sanders also fought back when Pfannenstiel tried to shift his answer from climate to trade more narrowly.

“Well, they are the same in this issue,” he said, according to the transcript.

Steyer joined Sanders in saying that he would not sign the deal because it failed to mention climate.

We can do much better than a Trump-led trade deal that does not even have the phrase “climate change” in it. #DemDebate pic.twitter.com/vTxrBcs9WI

The first question directly raised by the moderators about the climate crisis brought up last spring’s disastrous flooding in the Midwest and focused on what candidates would do about farms and factories that could not be relocated.

The question first went to Buttigieg, who spoke generally about the need to act on climate until the moderators repeated the question.

“We are going to have to use federal funds to make sure that we are supporting those whose lives will inevitably be impacted further by the increased severity and the increased frequency,” he said.

The question then went to Steyer.

“Look, what you’re talking about is what’s called managed retreat,” Steyer answered. “It’s basically saying we’re going to have to move things because this crisis is out of control. And it’s unbelievably expensive. And of course we’ll come to the rescue of Americans who are in trouble.”

Sen. Amy Klobuchar (D-Minn.) received some pushback from climate activists when she defended her decision not to call for an all-out ban on fracking.

Her remarks come less than a week after a study found that new oil and gas emissions projected for the next five years could nearly cancel out the decline in coal emissions, partly enabled by the fracking boom and the falling price of natural gas.

“I cannot believe I am listening to @amyklobuchar talking about fracked gas as a bridge fuel in 2020,” Sunrise Movement co-founder Varshini Prakash tweeted in response.

Over the course of the debate, the candidates attempted to position themselves as the best person to take on the climate crisis in office.

Steyer emphasized that climate was his top priority.

“And I’m still shocked that I’m the only person on this stage who will say this. I would declare a state of emergency on day one on climate,” he said.

Warren, meanwhile, painted herself as the best person to get to the root cause of decades of climate inaction.

“Mr. Steyer talks about it being problem number one,” she said. “Understand this, we have known about this climate crisis for decades. Back in the 1990s we were calling it global warming, but we knew what it was. Democrats and Republicans back then were working together because no one wanted a problem. But you know what happened? The industry came in and said, we can make big money if we keep them divided and make no change. Priority number one has to be taking back our government from the corruption. That is the only way we will make progress on climate, on gun safety, on health care, on all of the issues that matter to us.”

Sanders, for his part, pointed to his plan for a Green New Deal to transition to 100 percent renewable energy in 10 years.

“If we as a nation do not transform our energy system away from fossil fuel, not by 2050, not by 2040, but unless we lead the world right now — not easy stuff— the planet we are leaving our kids will be uninhabitable and unhealthy,” he said.

“[B]ack in 1986, I introduced the first climate change bill — and check PolitiFacts (sic); they said it was a game-changer. I’ve been fighting this for a long time. I headed up the Recovery Act, which put more money into moving away from fossil fuels to — to solar and wind energy than ever has occurred in the history of America,” he said.