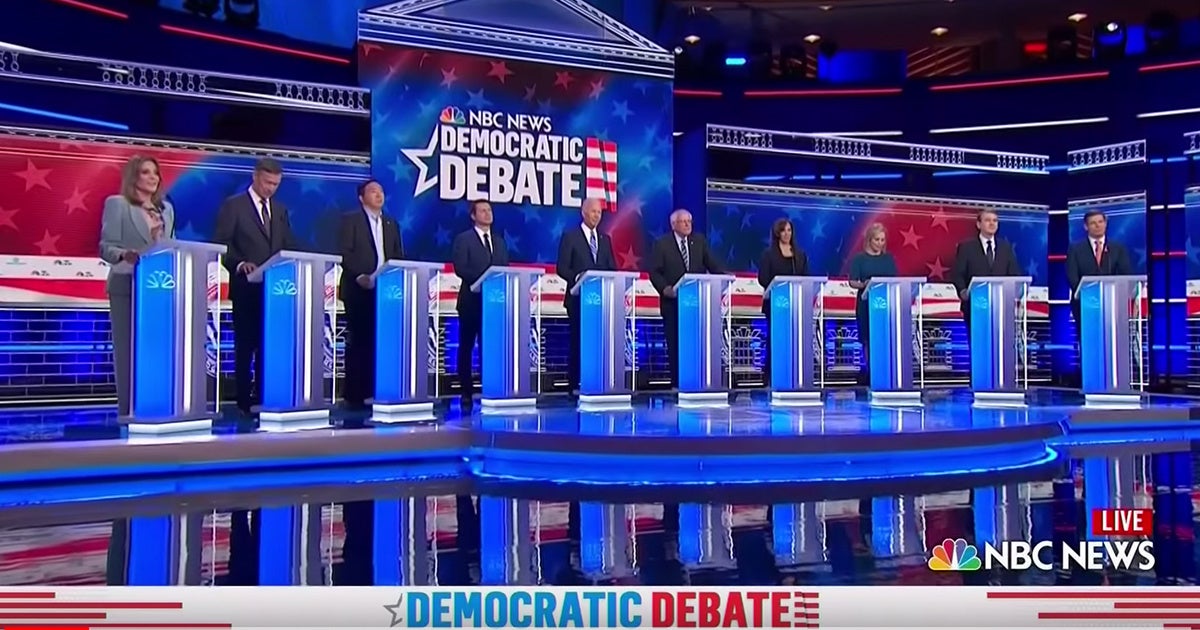 The Green New Deal — the ambitious plan to transition the U.S. away from fossil fuels while providing green jobs and reducing inequality — got its first mention during the second night of the Democratic primary debates Thursday.

While 14 candidates have thrown their support behind the idea, according to 350 Action’s 2020 Climate Test, California Senator Kamala Harris was the first to endorse it on the debate stage, The Atlantic reported.

When asked about her climate change plans, Harris corrected moderator Chuck Todd, saying the proper term was “climate crisis” because “it’s an existential threat to us as a species.”

“That’s why I support a Green New Deal,” she said. “It’s why on day one as president, I will reenter us into the Paris agreement.”

However, Atlantic writer Robinson Meyer noted that she offered no details on what a Green New Deal would look like before switching to a discussion of President Donald Trump’s handling of North Korea.

“There’s a marked difference in the fluidity of the way moderators and candidates talk about climate change versus how they talk about other issues,” Time writer Justin Worland responded in a Tweet.

Overall, the second half of the Democratic debate was another disappointment for climate action advocates, who have called on the Democratic National Committee (DNC) to hold a climate-focused debate. So far more than 200,000 people have signed a petition demanding such a debate, as HuffPost reported, but DNC Chair Tom Perez has refused.

The first debate on Wednesday, which saw half of the crowded primary field face off, only dedicated around seven minutes to the issue. The second half of candidates discussed it for around eight minutes Thursday, according to climate-focused candidate and Washington Governor Jay Inslee.

“Fifteen minutes in four hours. The DNC will not address the climate crisis with the urgency it requires. We must hold a climate debate. Now,” he tweeted.

Biden said that even if Congress would not back him, he would add 500,000 electric vehicle charging stations across the U.S. and earmark billions towards scientific research. He also emphasized his international experience as vice president, saying he would return the U.S. to the Paris agreement and encourage other countries to increase their commitments.

“We have to have someone who knows how to corral the rest of the world,” Biden said, according to The Washington Post.

Hickenlooper was actually the first candidate to mention the Green New Deal, according to The Atlantic, but he dismissed the idea as socialism, HuffPost reported. He said he would work with the oil and gas industry to reduce emissions as quickly as possible.

“Scientists tells us we have 12 years before irreversible damage. We have to come together against this common enemy, and transition the world off fossil fuels,” he said, according to the Sunrise Movement.

Candidates also had a chance to show how much they prioritized climate when Todd asked them what they would seek to accomplish if they could do only one thing, The Guardian reported.

Colorado Senator Michael Bennet and Hickenlooper both said climate change, while author Marianne Williamson said she would call the prime minister of New Zealand to get her advice on dealing with the climate crisis. Businessman Andrew Yang said he would institute a universal basic income, which would help address climate change.