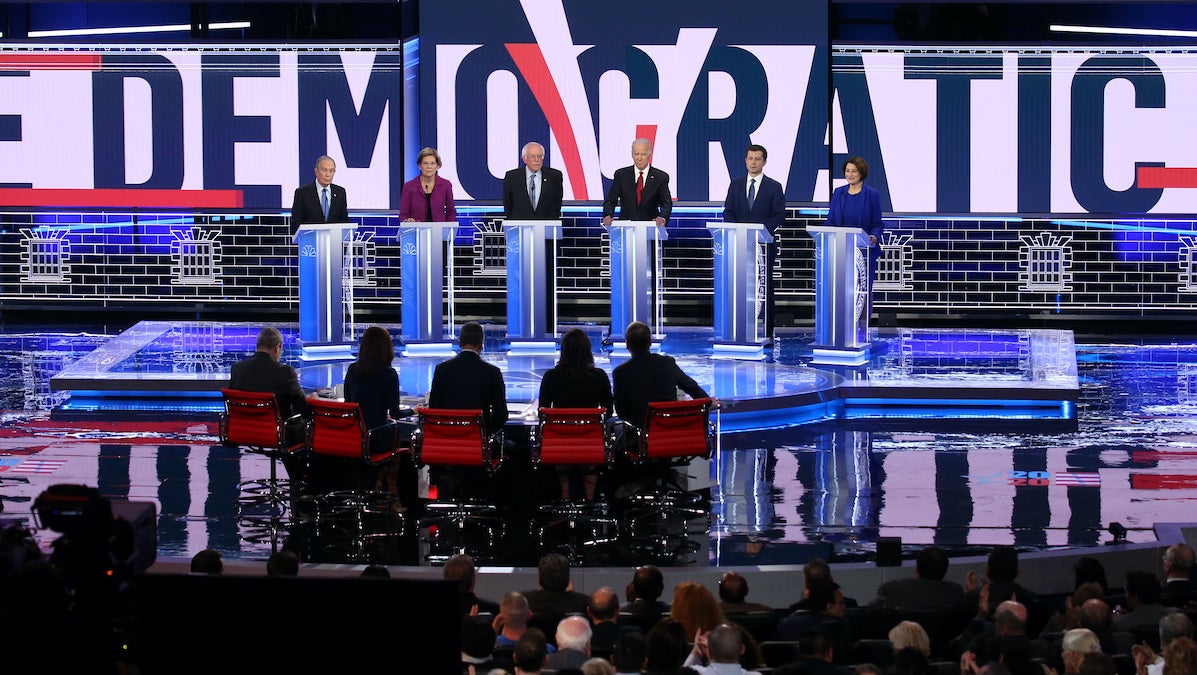 The climate crisis got its moment in the sun during the ninth Democratic primary debate in Las Vegas Wednesday.

The six qualifying candidates discussed the issue for a full 16 minutes, Grist reported. The debate also marked the first time that a climate journalist was numbered among the moderators: Telemundo climate correspondent Vanessa Huac, who has covered environmental issues for more than 20 years.

“People in the United States and all over our planet are realizing that climate change is one of the most important issues of our times,” Huac told NPR Tuesday ahead of the debate. “So, this is a great opportunity to really raise this issue and raise important questions to the candidates to see what are the plans, what are the proposals, how are they planning to face this existential crisis that we’re facing.”

This sense of public urgency around the issue is reflected in the pool of Nevadans who are likely to participate in the Democratic caucus Saturday. Eighty-six percent of them rated climate and the environment as very important or the most important issue of 2020, according to a League of Conservation Voters and Nevada Conservation League poll released last week. The poll also found that the issue came second to health care for most voters when deciding who to vote for. But for Latinx voters, who make up 20 percent of the Nevada voting block, climate was even more important than health care and immigration, InsideClimate News reported.

It's also by far the most important issue for Latinx voters pic.twitter.com/ryX8Oq5hFs

So how did the candidates address voters’ concerns?

Wednesday’s climate discussion was kicked off by Jon Ralston of the Nevada Independent, who pointed out that Reno and Las Vegas were among the fastest-warming cities in the country. He then directed his first question at former Vice President Joe Biden.

“What specific policies would you implement that would keep Las Vegas and Reno livable, but also not hurt those economies?” he asked, according to an NBC debate transcript.

Biden first focused on technical solutions, saying he would invest billion in renewable energy and battery technology. He also said he would reverse President Donald Trump’s environmental rollbacks and install 500,000 new electric vehicle charging stations in every highway his administration built or repaired.

“And I would invest in rail, in rail. Rail can take hundreds of thousands, millions of cars off the road if we have high-speed rail,” Biden said.

Former New York City Mayor Michael Bloomberg, meanwhile, touted his success shuttering 304 of 530 coal plants in the U.S. as part of his Beyond Coal campaign with the Sierra Club. He also said he would rejoin the Paris agreement.

“The first thing I want to do in Washington is pass my anti-corruption bill so that we can start making the changes we need to make on climate,” she said. “And the second is the filibuster. If you’re not willing to roll back the filibuster, then you’re giving the fossil fuel industry a veto overall of the work that we need to do.”

One major point of disagreement between the candidates was on whether or not to ban fracking.

Both Sen. Amy Klobuchar, (D-Minn.) and Bloomberg argued that natural gas is a “transitional fuel” between dirtier fuels like coal and renewable energy. Klobuchar said she would review every natural gas permit on a case-by-case basis and only approve them if they were safe. Bloomberg also said it was important to make sure natural gas extraction was done properly to not release excess methane. But he said it was not possible to abandon the fuel.

“We want to go to all renewables. But that’s still many years from now,” Bloomberg said.

Sen. Bernie Sanders (I-Vt.), on the other hand, has called for a fracking ban within the next five years, and addressed concerns that such a ban would hurt jobs. Sanders said the moment was too urgent not to act, and that the Green New Deal he supports would create as many as 20 million well-paying jobs.

“This is a moral issue, my friends. We have to take the responsibility of making sure that the planet we leave our children and grandchildren is a planet that is healthy and habitable,” he said. “That is more important than the profits of the fossil fuel industry.”

"We are fighting for the future of this planet," said @BernieSanders. "And the #GreenNewDeal, which I support by the way, will create up to 20 million good paying jobs as we move our energy system away from fossil fuels and to sustainable energy." #DemDebates pic.twitter.com/a11Kfxn8QV

Also on the issue of jobs, Warren was challenged on her plan to ban mining and drilling on public lands, which is an important industry in Nevada. Public lands are also potential sources of minerals like lithium and copper necessary for renewable energy technology.

Warren said she would make an exception for minerals that are needed to transition away from fossil fuels.

“If we need to make exceptions because there are specific minerals that we’ve got to have access to, then we locate those and we do it not in a way that just is about the profits of giant industries, but in a way that is sustainable for the environment,” she said.

Another point of disagreement was how to respond to China, which is currently the world’s No. 1 emitter of greenhouse gases.

Bloomberg argued that it was important not to “go to war” with China on emissions but rather to negotiate.

“I’m a little skeptical of the idea that convincing is going to do the trick when it comes to working with China,” he said. “America has repeatedly overestimated our ability to shape Chinese ambitions.”

Both Biden and Warren, unprompted, raised the issue of environmental justice.

“[M]inority communities are the communities that are being most badly hurt by the way in which we deal with climate change,” Biden said while answering a question about his plans to hold fossil fuel executives accountable for their pollution. “They are the ones that become the victims. That’s where the asthma is, that’s where the groundwater supply has been polluted. That’s where, in fact, people, in fact, do not have the opportunity to be able to get away from everything from asbestos in the walls of our schools.”

Warren later spoke up to “make sure that the question of environmental justice gets more than a glancing blow in this debate.”

.@ewarren was the first candidate on the stage to bring up the impact of racist environmental policies on communities of color in the US. #DemDebate pic.twitter.com/74oJi8gEOr

She touted her trillion dollar plan to repair the environmental damage that had already been done to communities of color.

“We have to own up to our responsibility,” she said. “We cannot simply talk about climate change in big, global terms. We need to talk about it in terms of rescuing the communities that have been damaged.”