Moderators Ask Only One Climate Question at Fifth Democratic Debate 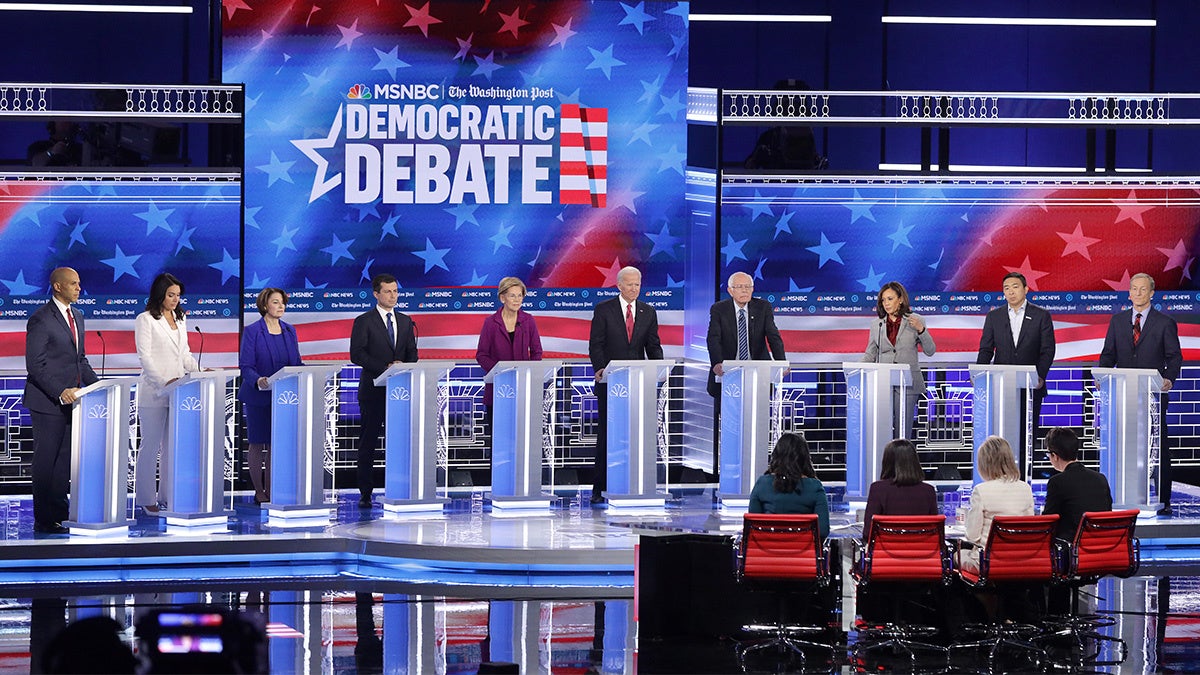 The moderators of the fifth Democratic primary debate in Atlanta Wednesday night only asked one question about the climate crisis, Grist reported Thursday.

This is in keeping with the past four debates, during which climate concerns have made up less than 10 percent of the questions asked. Despite this, 96 percent of Democratic voters listed climate action as the top priority they want the 2020 candidate to support.

The moderating team, from MSNBC and The Washington Post, said in the debate’s introduction that climate would be one of the issues covered, but the only question on the issue came about halfway through, and took up around six to seven minutes of airtime, climate activist group the Sunrise Movement noted.

Moderator Rachel Maddow of MSNBC said that many of the thousands of questions viewers sent to the moderating team involved climate, and shared one from Calista from Minneapolis.

“Leading the world in resolving the climate crisis will be a multi-decade project, spanning far beyond even a two-term presidency. If you are elected president, how would you ensure that there is secure leadership and bipartisan support to continue this project?” she asked, according to a debate transcript published by NBC News.

The first answer went to Hawaii Representative Tulsi Gabbard, who, Grist noted, was the only one of the 10 candidates present who has not yet released a major climate plan.

Gabbard blamed partisan gridlock for the lack of climate action and promised to transition the U.S. off of fossil fuels and end federal subsidies for the industry, according to the transcript.

The question next went to billionaire Tom Steyer, who has made the climate crisis a major part of his campaign.

Former Vice President Joe Biden then defended his position and his record on climate change.

“I think it is the existential threat to humanity. It’s the number-one issue,” Biden said.

He also said he had passed the first climate change bill. (The bill in question, the Global Climate Protection Act of 1986, was introduced by Biden in the Senate and mandated a U.S. Environmental Protection Agency climate policy and annual climate-change reports to Congress, according to Inside Climate News.)

Steyer, however, countered that “Congress has never passed an important climate bill ever.” Inside Climate News noted that Biden’s effort was largely ignored by President Ronald Reagan.

The question then went to Independent Vermont Senator Bernie Sanders.

Sanders said he had introduced legislation to declare a climate emergency and upped the ante on the question’s timeline.

He also pointed to the national security issues raised by the hundreds of millions of climate refugees predicted to be displaced in coming years and put the blame for the crisis squarely at the feet of the fossil fuel industry.

“What we have got to do tonight, and I will do as president, is to tell the fossil fuel industry that their short-term profits are not more important than the future of this planet,” he said.

He also said that the country should think about prosecuting the industry for its lies.

“Your questioner said, ‘What are we going to do in decades?’ We don’t have decades."@BernieSanders goes on to describe how he would send a message to fossil fuel industry, that "their short-term profits are not more important than the future of this planet.#DemDebate pic.twitter.com/LQUsCjOc7Y

Sanders was also the first candidate to bring up the climate crisis independently of the moderators.

“We’re facing the great existential crisis of our time in terms of climate change,” he said in part of his response to a question about how important the impeachment of President Donald Trump would be to his campaign.

Other candidates made space to weigh in as well. South Bend, Indiana Mayor Pette Buttigieg incorporated it into an answer about farm subsidies.

“American farming should be one of the key pillars of how we combat climate change. I believe that the quest for the carbon negative farm could be as big a symbol of dealing with climate change as the electric car in this country,” he said.

In talking about service, Massachusetts Senator Elizabeth Warren promoted her plan to employ 10,000 young people and veterans to rebuild national parks to help fight climate change, according to Grist.

Through a #GreenNewDeal we can provide new opportunities to serve the country while fighting climate change: like rebuilding and protecting our national forests and parks. #DemDebate pic.twitter.com/8wD64J8UYa

Andrew Yang called the climate crisis one of the “real threats of the 21st century,” according to the transcript, and Steyer also pointed to the need to incorporate sustainability concerns while building more housing units to solve the affordable housing crisis.

“How we build units, where people live has a dramatic impact on climate and on sustainability,” he said.