Debate Moderators Have Time to Ask About Bipartisan Friendship, but Not Climate Change 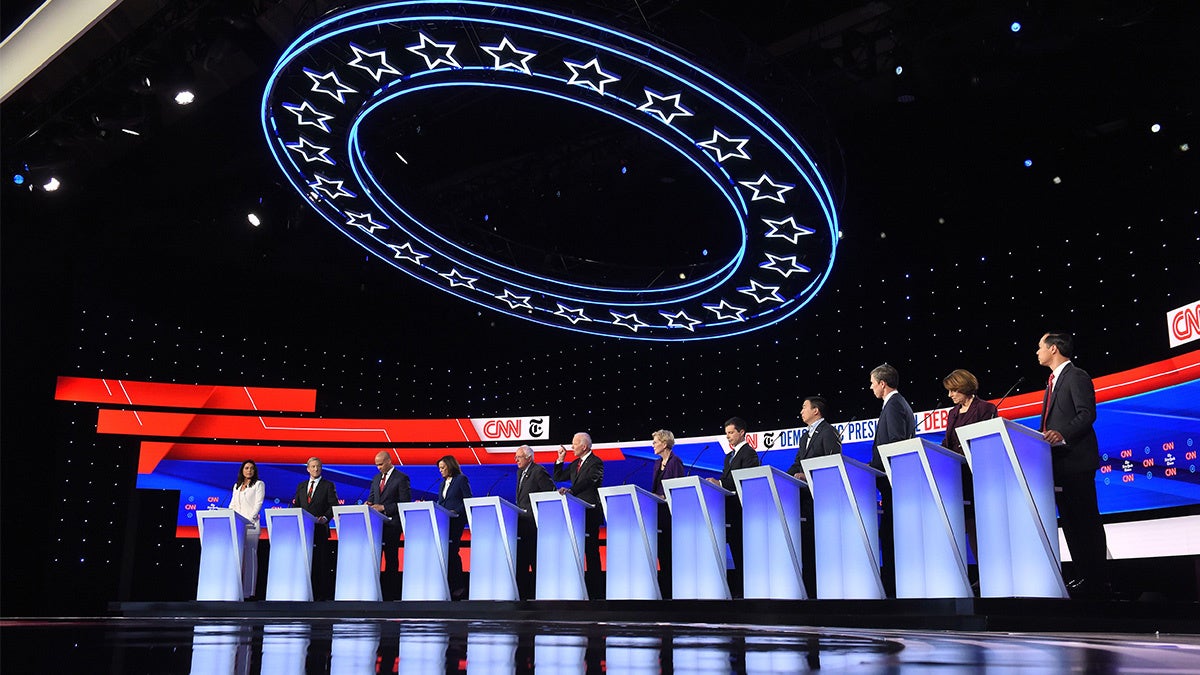 On Tuesday night, the Democratic presidential candidates gathered for what The Guardian said was the largest primary debate in U.S. history, and they weren’t asked a single question about the climate crisis.

This comes despite the fact that a September CBS poll found that 72 percent of Democrats rated climate change as a “very important” issue, below only health care. It also comes despite a push from climate activists and some candidates this summer for a debate entirely focused on the climate crisis, a push the Democratic National Committee ultimately refused.

Climate activists and concerned citizens took to Twitter to express their outrage.

“Just a livable future for our generation at stake,” the Sunrise Movement tweeted. “Guess there’s no need to ask what the next President of the United States is gonna do about it.”

Viewers were especially outraged when, in the last 15 minutes of the debate, CNN’s Anderson Cooper referenced the recent revelation that liberal entertainer Ellen DeGeneres and former Republican President George W. Bush are friends.

“In that spirit, we’d like you to tell us about a friendship that you’ve had that would surprise us and what impact it’s had on you and your beliefs,” Cooper asked.

The contrast between the gossipy nature of the question and the seriousness of the issue that was not raised drew ire.

Even some of the candidates called out the moderators for their priorities.

Former Secretary of Housing and Urban Development Julián Castro pointed out that there had been no questions about climate, housing or immigration.

“Climate change is an existential threat. America has a housing crisis. Children are still in cages at our border,” he tweeted. “But you know, Ellen.”

“So I’m friends with a woman from Denmark, South Carolina, named Deanna Berry, who’s fighting for clean water and environmental justice in her community,” he said, according to a Washington Post debate transcript. “She’s a different gender. She’s a different race. She’s from a different part of the country. But she reminds me of my parents in terms of her courage and her optimism and her honor.”

Steyer also called attention to the lack of a climate question after the debate.

“I’ll tell you what broke my heart is that no one asked a question about climate,” Steyer told reporters in a video posted by NBC New York. “I’ve spent more than 10 years working on climate, I’ve said it’s the number one priority of my administration, and that I’d declare a state of emergency on day one.”

Despite the moderators’ silence, most of the other candidates did mention the climate crisis during the debate itself, Grist pointed out.

“Let’s go to the most important international problem that we’re facing, which no one has brought up, which is climate,” Steyer said. “We can’t solve the climate crisis in the United States by ourselves. It’s an international crisis.”

Senator Bernie Sanders (I-Vt.) brought it up during a question about his federal jobs guarantee.

“Furthermore — and I hope we will discuss it at length tonight — this planet faces the greatest threat in its history from climate change. And the Green New Deal that I have advocated will create up to 20 million jobs as we move away from fossil fuel to energy efficiency and sustainable energy,” he said, according to The Washington Post.

Finally, both Sanders and South Bend, Indiana Mayor Pete Buttigieg cited the climate crisis as one of the major issues the country still has to deal with as the impeachment process against President Donald Trump continues.

Buttigieg asked the audience to look forward to the moment when the Trump presidency is over, one way or another.

“But really think about where we’ll be: vulnerable, even more torn apart by politics than we are right now. And these big issues from the economy to climate change have not taken a vacation during the impeachment process,” Buttigieg said, as The Washington Post reported. “I’m running to be the president who can turn the page and unify a dangerously polarized country while tackling those issues that are going to be just as urgent then as they are now.”