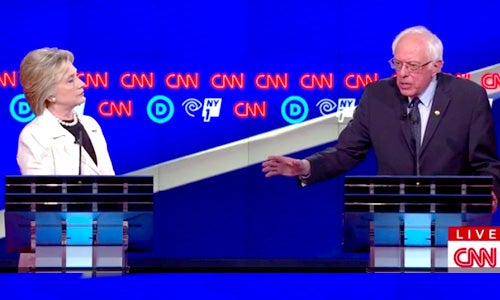 During last night’s Democratic debate at the Brooklyn Navy Yard, a site that was flooded by Hurricane Sandy, presidential candidates Bernie Sanders and Hillary Clinton displayed the fiercest exchange around climate change yet.

“The movement has pushed climate change to the forefront of this presidential election,” said Yong Jung Cho, spokesperson for 350 Action. “From the 400,000 people in the streets of New York City at the People’s Climate March and a statewide ban on fracking in New York, to young people across the country asking candidates over 130 questions on climate over the course of the election, tonight’s debate was proof that organizing works.”

Next Tuesday’s highly anticipated primary in New York, one of the only states with a ban on fracking, will be pivotal in defining each candidate’s climate platforms.

Earlier this year, the Porter Ranch disaster just miles outside of Los Angeles shined a harsh spotlight on the dangers of existing natural gas infrastructure and intensified concerns around the impact fracking has on communities and the climate.

During her tenure as Sec. of State, Hillary Clinton traveled abroad selling fracking to the world, though she recently expressed her support for the statewide ban on fracking New York. Just yesterday, Clinton introduced a new platform that speaks to the widespread issue of environmental injustice. Across the country, fracking has disproportionate impacts on low-income communities and communities of color.

The latest research on fracking affirms that methane emissions from the fracking are significantly more potent than carbon dioxide. Activists are concerned that Clinton’s referral to natural gas as a “bridge fuel” is inconsistent with how serious of a problem she considers climate change.

“The science tells us that the climate is changing faster than ever predicted—there is no room for incrementalism here,” said Cho. “Secretary Clinton has ramped up plans to tackle climate change, yet she’s still referring to natural gas as a potential ‘bridge fuel.’ It’s time that she recognize natural gas for what it is: a fossil fuel and a major contributor to climate change.”

At every corner of the nation, climate activists are uniting under the banner to “keep it in the ground,” calling for an end to all fossil fuel extraction on public lands and waters. During last night’s debate, Sen. Sanders mentioned the Keep It In The Ground Act, an unprecedented piece of climate legislation that he supported in November.

Within the first moments of the debate, candidates fired at one another around the influence of corporate money in the campaign. Young people across the country have been asking all candidates to refuse donations from fossil fuel interests and have been asking about Clinton about her ties to the fossil fuel industry since July. Days after the conclusion of the Paris climate talks, Clinton vowed to look into fossil fuel donations to her campaign.

Reports confirm that Clinton’s biggest campaign bundlers have come from fossil fuel lobbyists. According to a recent report from Greenpeace, fossil fuel interests have pumped more than $4.5 million into Clinton’s campaign and supportive super PACs during the 2016 election cycle. The Clinton campaign has received the maximum amount in donations from industry lobbyists, including ExxonMobil’s Theresa Fariello.

59 fossil fuel lobbyists & bundlers have given over $1.4 million to @HillaryClinton. We #DidOurResearch: https://t.co/kJqPSPBwka #DemDebate

Last night’s debate was testament to how far climate activists have helped move both candidates on climate change. Activists have pushed Democratic candidates to express stronger stances on climate than ever before, including Secretary Clinton expressing opposition to the Keystone XL pipeline, offshore drilling, fossil fuel extraction on public lands, the Trans-Pacific Partnership and calling for a Department of Justice investigation into Exxon’s climate crimes, as well as Sen. Sanders coming out against the NED and Enbridge pipelines.

“The climate movement has set the new standard for our politicians that all ties to fossil fuel interests are unacceptable,” said Cho. “It’s relieving and exciting to see climate change finally being addressed as the urgent crisis that it is. Tonight’s debate was a stark reminder of the real villain: the fossil fuel industry.”