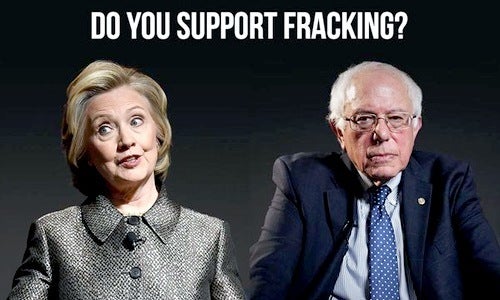 The Democratic debate Sunday night discussed important issues to our food and water, including the contamination of Flint, Michigan’s water supply and climate change. The fact that CNN allowed University of Michigan student Sarah Bellaire to ask the candidates whether or not they support fracking—bringing a real discussion about dirty fossil fuels to center stage—shows how large and influential our movement to ban fracking has become.

Bernie Sanders‘ concise response after Hillary Clinton‘s long list of “conditions” that must be met in order for her to support fracking was met with thunderous applause: “My answer is a lot shorter. No, I do not support fracking.”

While the Obama administration—including Clinton herself as secretary of state—has been a staunch promoter of fracking, touting industry claims about energy security and that it could be a bridge to renewables, a growing movement is forcing Democratic leaders to acknowledge that fracking is bad for our environment and public health and a disaster for our climate.

Here is what Clinton—who has fundraising ties to the oil and gas industry—had to say about fracking:

“You know, I don’t support it when any locality or any state is against it, number one; I don’t support it when the release of methane or contamination of water is present; I don’t support it, number three, unless we can require that anybody who fracks has to tell us exactly what chemicals they are using—so by the time we get through all of my conditions, I do not think there will be many places in America where fracking will continue to take place. And I think that’s the best approach. Because right now, there are places where fracking is going on that are not sufficiently regulated. So first, we’ve got to regulate everything that is currently underway and we have to have a system in place that prevents further fracking unless conditions like the ones I just mentioned are met.”

The State of Fracking in the Democratic Party

While Democratic Gov. Andrew Cuomo effectively banned fracking in New York in 2014 after a massive grassroots movement to halt it, some Democratic governors—including Gov. Tom Wolf of Pennsylvania, Gov. Jerry Brown in California (who has been dealing with his own climate disaster) and Gov. John Hickenlooper in Colorado—continue to support fracking. Moderator Anderson Cooper asked Sanders about this insistence from some Democratic governors that fracking is safe. “I happen to be a member of the environmental committee … And I talk to scientists who tell me fracking is doing terrible things to water systems all over this country,” responded Sanders.

The Washington Post’s Fact Checker took on Sanders’ statement, citing the U.S. Environmental Protection Agency’s (EPA) study released last year asserting that fracking and drinking water that fracking has had no “widespread, systemic” effects on water. After we contacted them, Fact Checker updated the piece to acknowledge the continuing controversy around that claim, including the EPA’s own scientific advisory board questioning that conclusion and calling for the agency to revise the statement. The EPA had long abandoned its investigations in Dimock, Pennsylvania; Pavillion, Wyoming; and Parker County, Texas. And inexplicably, the EPA had excluded their “high-profile” cases of contamination from the assessment. Public testimonies from people suffering from contaminated water also continue to undermine the legitimacy of the study.

Today, nine months after the release of that study, the agency is holding a public teleconference about the ongoing controversy. The case of the claim there has been no “widespread, systemic” contamination is far from over. And the movement to ban fracking is taking on the Democratic establishment, as Sanders calls it, descending on the Democratic National Convention in July demanding action to leave fossil fuels in the ground and transition swiftly to clean energy.

Five years ago, when Food & Water Watch became the first large, national organization to come out strongly for a ban—following the lead of communities that had already been grappling with concerns about the practice—we didn’t think we’d come so far so fast. The Democratic debate shows the power of organizing to shift decision makers. In fact, continuing to apply pressure on our leaders to keep fossil fuels in the ground is the only way to bring about a true, clean energy future. Market-based schemes like pollution trading and pricing carbon will only prolong our fossil fuel addiction. Our planet can no longer accommodate business as usual and we’re pleased to see the Democratic debates reflecting this discussion that our nation needs to have.