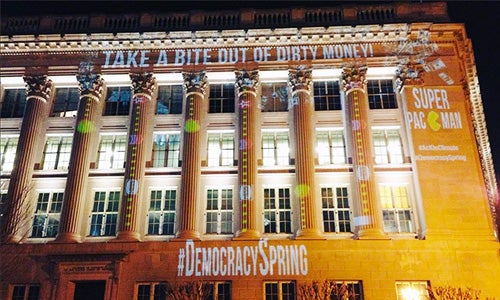 Though you wouldn’t know it by tuning in to mainstream media, more than 600 people have been arrested in the nation’s capital since Monday as part of Democracy Spring, the mass civil disobedience campaign aimed at getting big money out of politics, restoring voting rights and reviving democracy.

The fight against dirty energy money comes to the Chamber of Commerce. Polluters out, people in! #DemocracySpring pic.twitter.com/a7ZwKpCwcU

Close to 100 demonstrators were taken into custody and released on Wednesday, a day dedicated to the struggle for racial justice, as roughly 1,000 non-violent protesters looked on. Also Wednesday, the Congressional Progressive Caucus (CPC) endorsed the movement.

“We are proud to stand with our allies calling for a democracy that is open and accountable and a government that puts the needs of hard working people ahead of big corporations,” said CPC co-chairs Reps. Raúl Grijalva (D-Ariz.) and Keith Ellison (D-Minn.). “The issues raised by these progressive groups are the defining issues of our time.”

And on Wednesday night, Democracy Spring activists with Friends of the Earth and Oil Change International projected their hashtag and the words, “Super PAC Man: Take a bite out of dirty money” on the outside of the American Petroleum Institute building. The fossil fuel lobbyists were exposed Wednesday as having known of “serious” climate concerns associated with burning oil and gas as early as the 1960s.

https://twitter.com/EcoWatch/status/720595541986451456 and the Chamber of Commerce to do their dirty work in the capitol,” said Jon Fox, senior democracy campaigner for Friends of the Earth. “We hope to shine a bright light on the millions of dollars dirty fuel lobbyists spend to keep polluting the planet.”

Striking Verizon workers, Fight for $15 advocates and additional members of Congress will join the actions on Thursday, focused on the movement’s solidarity with organized labor.

“From Selma to Occupy Wall Street, from the Fight for 15 to Black Lives Matter, everyday people have proven the power of mass, escalating non-violent action to rapidly shift the political weather and open the door to reforms previously considered impossible,” said Stuart Appelbaum, president of the Retail, Wholesale and Department Store Workers and vice president of the United Food and Commercial Workers union, on Thursday. “We can and we must do the same now for democracy itself.”

As the president of the Retail, Wholesale and Department Store Union I am intimately aware of how big box retailers and other corporate interests use campaign contributions and super PACs to block living wage increases, family leave and paid-sick time for hard-working Americans. Many of the members of our union are young people, people of color and women and it is their voices and votes that our pay-to-play campaign finance system shuts out.

Solutions to restore balance to the system are in our grasp and have begun to be implemented in cities and states, like Seattle and Maine. The moment is ripe to bring solutions like citizen-funded elections and automatic voter registration to the federal level.

Some commentators have noted that despite the scale of the actions, coverage in mainstream media has been sparse.

According to Rolling Stone, “Police records suggest Monday was the largest spate of mass arrests in at least a decade at the U.S. Capitol and close observers of Washington activism say it may have been the largest since the Vietnam War.”