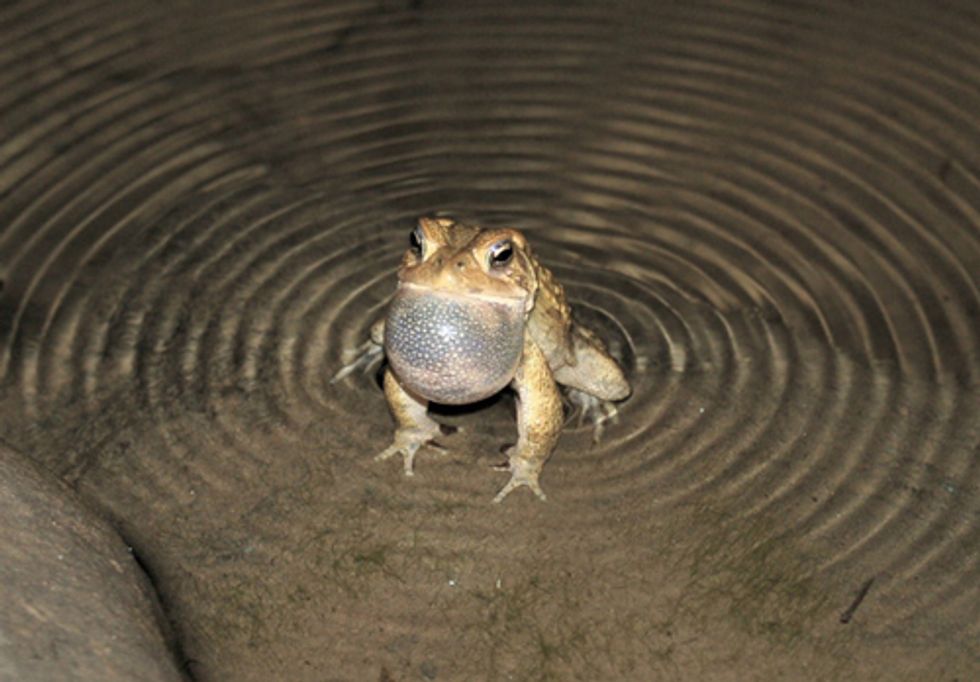 According to a letter sent by the Delaware Riverkeeper Network to multiple regulatory agencies, the delays by the Tennessee Gas Pipeline to implement mandated restoration for their 300 Pipeline project has resulted in increased pollution during the time of the delay, and now threatens to decimate
emerging amphibian populations in a number of wetland areas already damaged by the pipeline company. The Delaware Riverkeeper Network is therefore urging swift intervention by the Pennsylvania Department of Environmental Protection (DEP) and other regulatory agencies to consider and address the implementation of the long-overdue wetlands activities in light of new information about impacts to amphibians. The agencies received a letter from the Delaware Riverkeeper Network explaining the situation and urging swift intervention to have the intensive construction activities that are part of the restoration delayed until the amphibians were mature enough to leave the site. According to the letter, Tennessee Gas Pipeline has had months to implement the overdue restoration, the pipeline went into service in November, and they should not now be allowed to inflict additional harm.

“Had the Tennessee Gas Pipeline company honored the requirements of their state issued permits the pipeline would have gone in and associated environmental restoration would already be complete, allowing us to avoid sediment and other pollution to local streams and wetlands that has taken place over the past several months, and avoiding the new catastrophic threat faced by hundreds, if not thousands, of emerging amphibians in the process of procreating and developing in the still disturbed wetlands around the pipeline site,” said Maya van Rossum, the Delaware Riverkeeper. “Tennessee Gas Pipeline has been irresponsible with how they have pursued this project, it was their procrastination that has put us all in this situation. To allow them to now add insult to injury by finally undertaking their overdue restoration work but at a time when it will ensure maximum harm to the very ecosystems and species it was supposed to help would be reprehensible, counterintuitive and counterproductive,” adds van Rossum.

The Delaware Riverkeeper Network’s Monitoring Director, Faith Zerbe, discovered the wetlands teaming with wood frogs, American toads and red spotted newts on a site visit to monitor the ongoing failure of restoration by TGP earlier this week. “We didn’t do a full herpetological survey,” Zerbe said, “but we didn’t have to immediately know the dramatic level of harm TGP would be inflicting if they finally began their restoration work in this area during this critical period of reproduction for the amphibians.”

“As soon as we realized the situation, the Delaware Riverkeeper Network took immediate action to try to secure protective action by the agencies,” van Rossum adds.

Also according to van Rossum, “this is sadly more of the same from Tennessee Gas Pipeline.” According to a letter sent by the Delaware Riverkeeper Network to regulatory agencies earlier this year: During the 300 Line Extension Project, in 28 out of 38 “Environmental Compliance Monitoring Program Weekly Summary Report[s]” that were provided on FERC’s website, at least one recorded incident was reported where an activity did not come into “compliance with Project specifications, mitigation measures, and applicable FERC-approved Project plans.” Out of 16 inspections conducted by the Wayne County Conservation District during the 300 Line Extension Project, violations were found in no less than 15 of the inspections. The Pike County Conservation District cited numerous violations during the 300 Line Extension Project including, but not limited to: 17 instances of dirt and sediment being discharged into water bodies, 7 violations for worksite conditions, and 21 instances of failure to properly institute Best Management Practices for erosion and sediment control.