An Indonesian forestry company with possible links to pulpwood and palm oil powerhouse Royal Golden Eagle has cleared forests the size of 500,000 basketball courts since 2016, some of them home to critically endangered orangutans, according to a new report.

Nusantara Fiber controls 242,000 hectares (598,000 acres) of industrial tree plantations via six subsidiary companies in the Bornean provinces of West, Central and East Kalimantan. Industrial trees include acacia and eucalyptus, which are used in the production of paper and textile fibers; timber trees; and trees grown for biomass energy generation.

The Nusantara Fiber group obtained most of its permits from 2009-2011 and started clearing forest areas to develop its plantations in 2016, according to a spatial analysis by the research consultancy Aidenvironment. The analysis used satellite imagery, forest cover maps from Indonesia’s Ministry of Environment and Forestry, and Global Forest Watch maps of tree cover loss.

The analysis shows that from 2016 to 2020, the group cleared 26,000 hectares (64,200 acres) of forests, making it the top deforester among all company groups with industrial tree concessions in Indonesia during this period.

Most recently, the group cleared 6,500 hectares (16,000 acres) of forests in 2020. It contends these areas were designated as degraded land, and that its clearing activity was approved by the Ministry of Environment and Forestry, which Aidenvironment acknowledged in its report. “Indeed, the Indonesian government has not banned all forest-clearing,” it said.

But the forests that were lost were still valuable, according to the NGO. It cited a concession managed by PT Industrial Forest Plantation (IFP), one of Nusantara Fiber’s six subsidiaries, in Kapuas district, Central Kalimantan province. Based on a 2016 assessment of orangutan habitat in Indonesia, the forests inside IFP’s concession overlapped almost fully with a known habitat of the southwestern subspecies of the Bornean orangutan, Pongo pygmaeus wurmbii, a critically endangered animal.

A 2014 assessment commissioned by IFP had also identified the presence of orangutans inside the concession boundaries, as well as other protected fauna and flora, including 29 bird species, 22 mammal species, six types of reptiles, and 15 tree and plant species.

Aidenvironment said IFP’s case shows how the cleared areas were still valuable, even though they might have been classified as secondary or degraded forests. As of now, there are approximately 50,000 hectares (124,000 acres) of forests remaining in Nusantara Fiber’s concessions. They are at risk of disappearing too, as the concession holders are licensed to clear them.

“If it’s cleared it could have a devastating impact on orangutans and wider biodiversity in this area.” Wiggs said. “Nusantara Fiber must urgently halt forest clearance on its concessions.”

Despite being the top industrial tree plantation deforester, the Nusantara Fiber group is shrouded in secrecy, with its owners’ identities concealed thanks to the offshore secrecy jurisdiction of Samoa. That’s where Nusantara Fiber’s parent company, Green Meadows Holdings Limited, is registered.

While registering in an offshore jurisdiction is not in itself illegal, it’s often done to shield the beneficial owners of a company from liabilities, obligations and accountability in the territory where it operates.

“Establishing connections between companies is always difficult, and it’s made harder when companies use secrecy jurisdictions like the British Virgin Islands,” Wiggs said.

Two of the three first directors of Green Meadows Fiber Products Limited previously worked at RGE, Aidenvironment found. “Another couple of the first directors are or were involved in various palm oil businesses totalling 27 palm oil mills and/or kernel crushers, and RGE is a customer of all 27 companies,” the report says. “Historical ownership records of Nusantara Fiber group’s companies reveal past control by entities that are part of or connected to RGE, before the companies were moved to secrecy jurisdictions.”

These records, Wiggs said, “clearly connect the group to Royal Golden Eagle,” and should be reason enough for RGE to step up and put an end to the deforestation conducted by Nusantara Fiber’s industrial tree plantations. 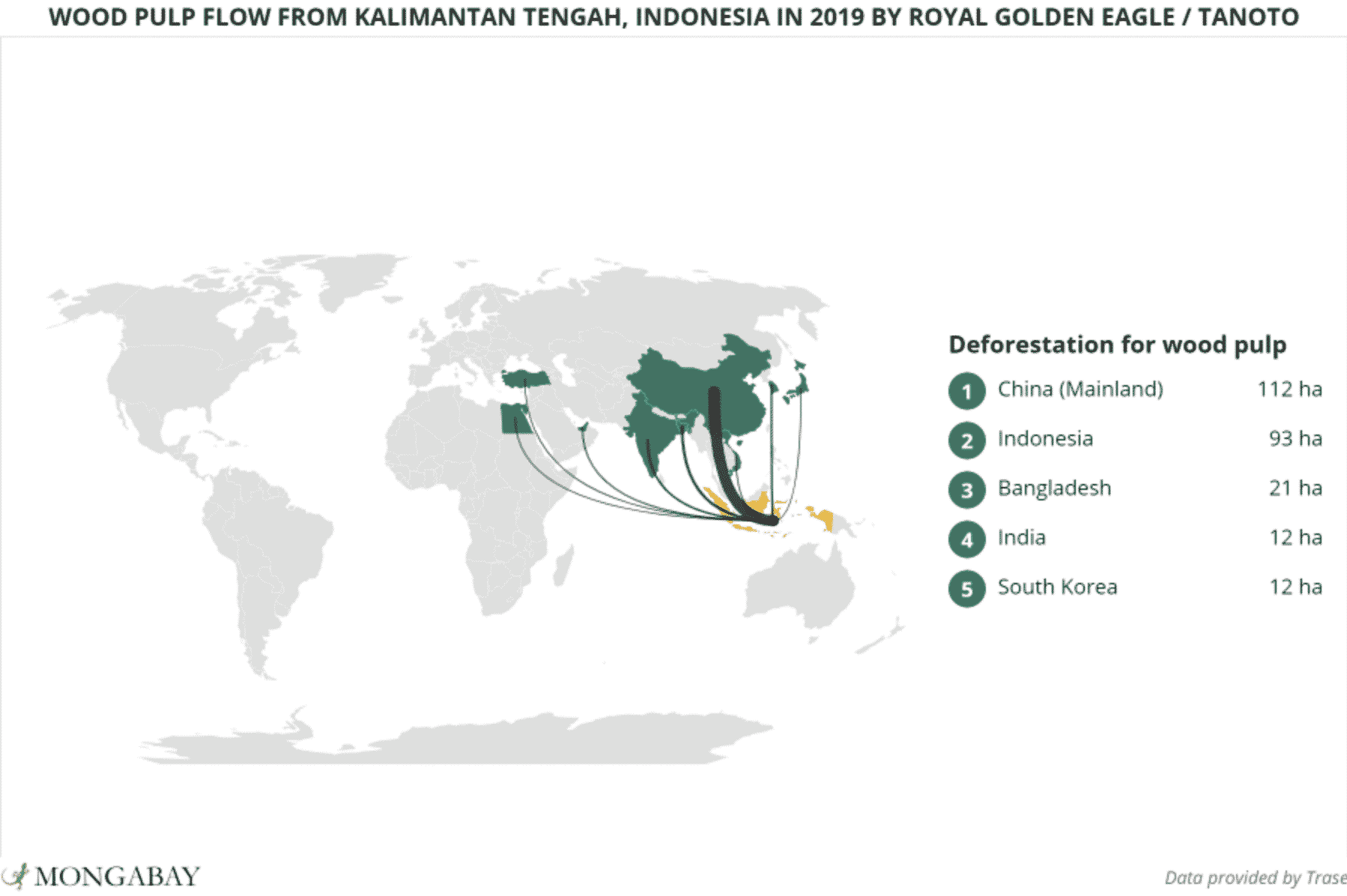 RGE is the fourth-biggest palm oil refiner in Indonesia, which in turn is the world’s top producer of palm oil. Like its major competitors, RGE has a policy of no deforestation, no developing on peatland, and no exploiting workers and local communities, known as an NDPE policy. It covers commitments to preserve HCV and HCS areas as well as peatlands, but is restricted only to its palm oil business.

For its pulp and paper business, which is supplied by industrial tree plantations, RGE has adopted what it calls a Forestry, Fibre, Pulp & Paper Sustainability Framework across the group. While it’s similar to the NDPE policy in use across its palm oil business, this sustainability framework still allows development of peatland as long as it’s not forested, Aidenvironment said.

It called on RGE to apply its NDPE policy to all its businesses, not only palm oil.

Even then, the policy would only apply to companies and their suppliers that RGE acknowledges as being part of the RGE group of companies. In the case of Nusantara Fiber and its subsidiaries, RGE has denied any connection.

He added the fact that two of the Nusantara Fiber group’s directors were past RGE employees didn’t constitute any kind of link. “We operate in a free and open employment market in which employees can choose to join or leave employers as they wish,” Ignatius said.

In response to the ownership of the 27 Nusantara Fiber-linked palm oil mills that RGE sources from, Ignatius said the group had no knowledge of the alleged ownership links listed in the report.

“There was no alleged violation against palm oil industry standards or Apical’s sustainability policy by these suppliers noted in the report,” he said, referring to RGE’s palm oil arm, Apical. “Apical is not the sole buyer of palm oil from these suppliers.”

Wiggs said RGE should have provided its own data to back up its denials and be fully transparent.

“We welcome any willingness by Nusantara Fiber and Royal Golden Eagle to clarify any incorrect data in our report,” he said. “Agricultural sectors must be fully transparent about their ownership structures, corporate links and operations.”

Instead, he said, RGE is able to deny any connection to Nusantara Fiber because both entities use opaque and complex company structures.

“Industrial tree and palm oil businesses should refrain from using opaque company structures,” Aidenvironment said, “because this hinders their accountability for unsustainable practices.”