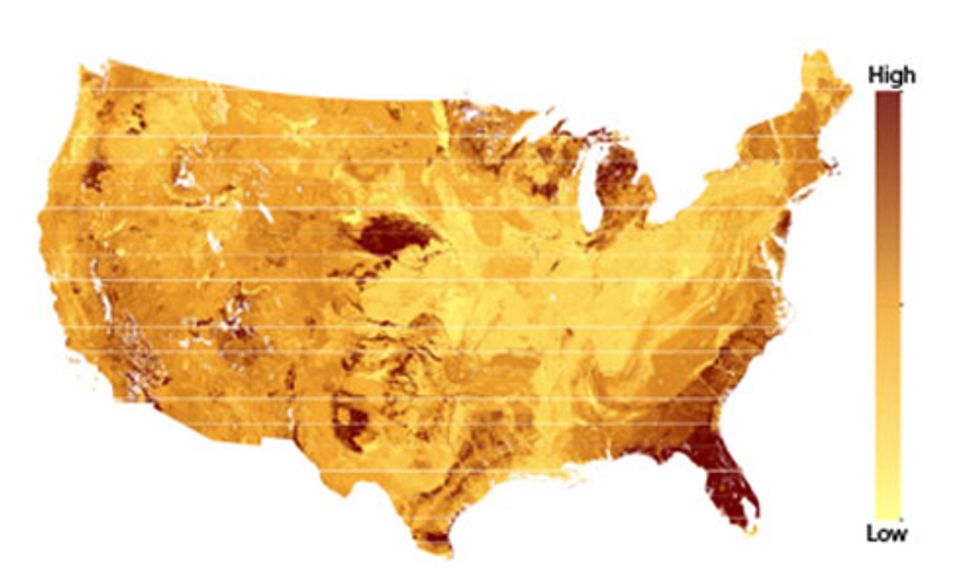 Deforestation may have far greater consequences for climate change in some soils than in others, according to new research led by Yale University scientists—a finding that could provide critical insights into which ecosystems must be managed with extra care because they are vulnerable to biodiversity loss and which ecosystems are more resilient to widespread tree removal.

This heat map shows the areas of the United States where the soil microbial biomass is susceptible to changes in vegetation cover. Graphic courtesy of Yale University

In a comprehensive analysis of soil collected from 11 distinct U.S. regions, from Hawaii to northern Alaska, researchers found that the extent to which deforestation disturbs underground microbial communities that regulate the loss of carbon into the atmosphere depends almost exclusively on the texture of the soil. The results were published in the journal Global Change Biology.

“We were astonished that biodiversity changes were so strongly affected by soil texture and that it was such an overriding factor,” said Thomas Crowther, a postdoctoral fellow at the Yale School of Forestry & Environmental Studies and lead author of the study. “Texture overrode the effects of all the other variables that we thought might be important, including temperature, moisture, nutrient concentrations and soil pH.”

A serious consequence of deforestation is extensive loss of carbon from the soil, a process regulated by subterranean microbial diversity. Drastic changes to the microbial community are expected to allow more carbon dioxide (CO2) to escape into the atmosphere, with the potential to exaggerate global warming.

Specifically, the researchers found that deforestation dramatically alters microbial communities in sandy soils, but has minimal effects in muddy, clay-like soils, even after extensive tree removal.

According to the researchers, particles in fine, clay-like soil seem to have a larger surface area to bind nutrients and water. This capacity might buffer soil microbes against the disturbance of forest removal, they said. In contrast, sandy soils have larger particles with less surface area, retaining fewer nutrients and less organic matter.

“If you disrupt the community in a sandy soil, all of the nutrients the microbes rely on for food are leached away: they’re lost into the atmosphere, lost into rivers, lost through rain,” Crowther said. “But in clay-like soil, you can cut down the forest and the nutrients remain trapped tightly in the muddy clay.”

The researchers also examined how the effects of deforestation on microbial biodiversity change over time. Contrary to their expectations, they found no correlation, even over the course of 200 years.

Using previously documented information about soil distribution, the researchers were able to map potential areas where below ground ecosystems are more likely to be vulnerable to deforestation. This has the potential to inform land management practices concerned with the conservation of biodiversity and the sequestration of carbon in the soil.

Co-authors of the study, Predicting the Responsiveness of Soil Biodiversity to Deforestation: A Cross-Biome Study, include Daniel S. Maynard, Emily E. Oldfield, and Mark A. Bradford of the Yale School of Forestry & Environmental Studies.