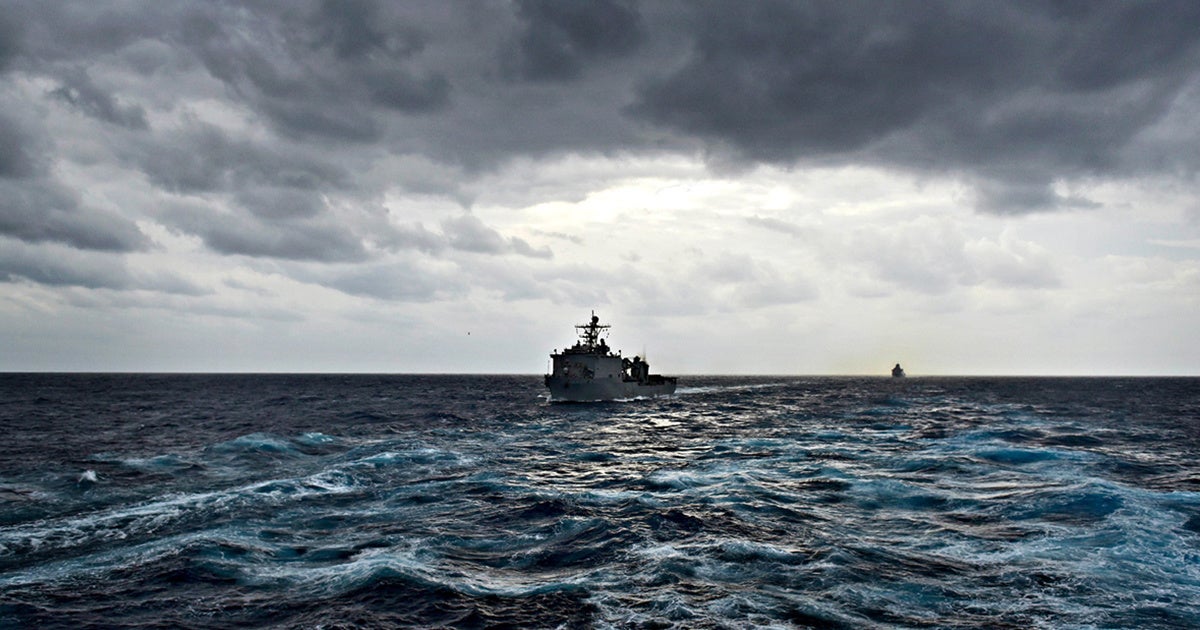 The USS Ashland, followed by the USS Green Bay, in the Philippine Sea on Jan. 21. U.S. Department of Defense

After a dearth of action on climate change and a record year of extreme events in 2017, the inclusion of climate change policies within the annual legislation Congress considers to outline its defense spending priorities (the National Defense Authorization Act) for fiscal year 2018 was welcome progress. House and Senate leaders pushed to include language that mandated that the Department of Defense (DoD) incorporate climate change in their facility planning (see more on what this section of the bill does here and here) as well as issue a report on the impacts of climate change on military installations. Unfortunately, what DoD produced fell far short of what was mandated.

With such a report, Congress was aiming to understand the most at-risk installations and the types and costs of mitigation measures that can help to ensure mission readiness. The Center for Climate and Security provides an excellent briefer on why these analyses are needed. 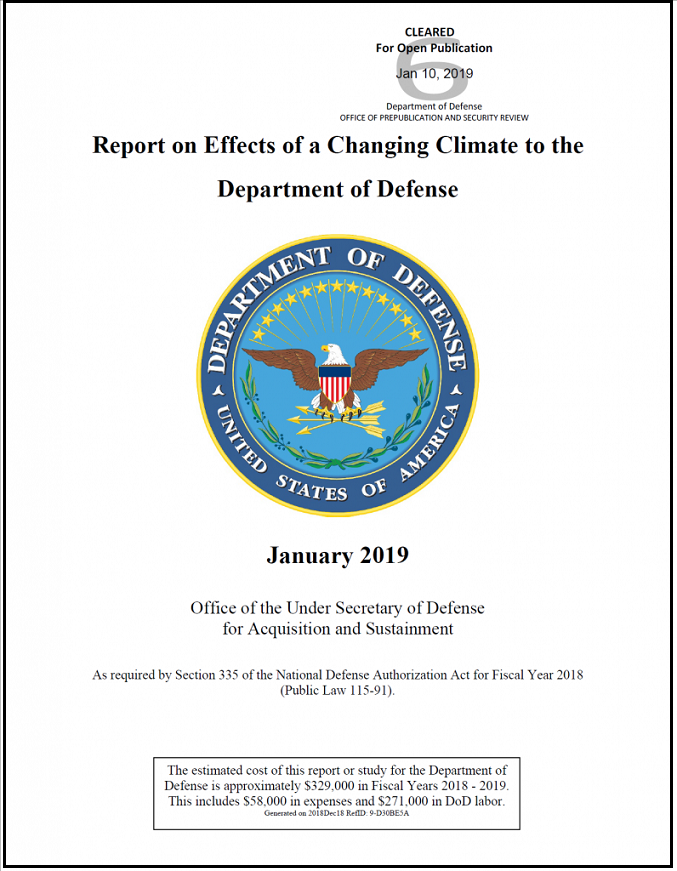 On Jan. 10, 2019, a month late, the Pentagon released the report. Congressional leadership (see statements by Senator Reed and Representatives Langevin and Smith) were rightly disappointed that the report failed to do due diligence in answering vital questions as mandated by law, such as ranking the ten most vulnerable installations by service branch and estimating the costs of mitigation measures. Experts Mark Nevitt at University of Pennsylvania Law School and John Conger at the Center for Climate and Security also weighed in on the inadequacy of the report. It was therefore welcome news that Representatives Langevin, Smith and Garamendi called for a version 2.0 to be completed by April 1, 2019.

With Congress demanding a thorough revision, what should DoD focus on for v2.0? After doing my own assessment of how DoD’s original report matched up with the legislative mandate, here are the top ten priorities the Department of Defense must include in their revised report to Congress. DoD must:

1. List the 10 Most Vulnerable Military Installations Within Each Armed Service
Branches

In the first report, DoD focused on 79 military considered priorities for mission assurance and relied on a binary approach, noting the “presence or not of current and potential vulnerabilities” to the installations deemed to be priorities for mission assurance over the next 20 years. In the revised report, DoD must, as mandated, rank national and international installations by each climate change-related impact for each of the armed service branches.

2. Include Consideration of the Marine Corps Branch

We know that the Marine Corps Base Camp Lejeune was hit hard by Hurricane Florence, sustaining $3.6 billion in damages. Additionally, our analysis found that Parris Island (a Marine Corps Recruit Depot) is highly exposed to storm surge and will be more so in the future. In fact, DOD’s own 2018 climate-related risks report found that:

“[U.S. Marine Corps] sites have experienced impacts from flooding, winds, extreme temperatures, drought, and wildfires. And, that “the impact categories receiving the highest frequency of occurrences are training areas/ranges/facilities and HVAC systems from extreme temperatures.”

With so much documented vulnerability to climate impacts, the omission of the Marine Corps is glaring in the current version of the report and must be addressed going forward.

3. Include International Sites in the Vulnerability Assessment

In the initial assessment, DoD included just two installations in U.S. territories both in Guam—Naval Base Guam and Andersen Air Force Base—which makes sense given that in 2018 Guam was hit by two major typhoons, Mangkhut and Yutu. However, it is not clear how or why other international sites were not addressed given that the report and the legislation both mention a few examples of their vulnerabilities, for example to the Marshall Island radar installation.

In Addition, the Government Accountability Office (GAO) found that the U.S. military’s nearly 600 overseas sites are critical to maintaining the readiness of military forces and represent a massive investment. In fact, GAO estimated the cost to replace these sites in 2014 to be roughly $158 billion. Moreover, DoD’s own reports include an assessment of sea level rise at more than 1,700 coastal installations worldwide and of sea level rise on atoll installations. Finally, we know that many of these international installations are in need of better planning and implementation of measures to address extreme weather impacts.

Scientists have found strong evidence that indicates climate change increases the frequency and intensity of events like extreme heat and extreme rainfall from hurricanes. In the original report, DoD was generally responsive to the letter of the law by assessing the risk of recurrent flooding, drought, desertification, wildfires and thawing permafrost. However, DoD ought to have included additional risks including extreme heat, cold and rainfall events given the evidence of damages these events cause, that they are projected to cause in the future and that Congress directed DoD to include “any other categories the Secretary determines necessary.” As a start, DoD can utilize their own climate-related risk vulnerability assessment from 2018 that provides a qualitative assessment of extreme weather and climate change-related risks on installations. 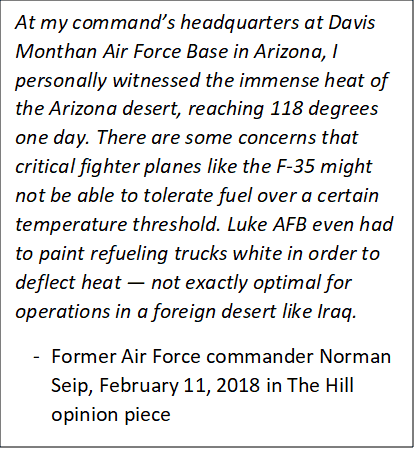 A quote by Lieutenant General Norman Seip, USAF (Ret) in The Hill opinion piece “Our military bases are not ready for climate change” on Nov. 2, 2018. He served in the Air Force for 35 years. He currently serves on the board of directors of the American Security Project.

5. Assess All types of Flooding Individually

6. Include the Climate-Risk Vulnerability Methodology

In the revised report DoD must include their methodology on assessing climate-risk vulnerability. DoD also must ensure the analyses are based on the latest science on climate change and extreme weather such as the new and major reports including the Fourth National Climate Assessment (NCA4) and the groundbreaking Intergovernmental Panel on Climate Change (IPCC) 1.5 ⁰C report. In addition, DoD has a wealth of excellent climate change-related reports that they ought pull from as well (e.g. DoD’s Regional Sea Level Rise Scenario report, among many others).

7. Include a Robust List of Mitigation Measures for All Risks and Vulnerable
Installations

Version 2.0 must address the types of mitigation measures needed for each of the climate change-related risks at the most vulnerable military installations. To do this, DoD can start by utilizing the Naval Facilities Engineering Command’s “NAVFAC Installation Adaptation & Resilience Climate Change Planning Handbook,“ which provides workbooks meant to help installation planners both analyze and develop actions to address the climate change-related challenges. For example, the NAVFAC handbook includes mitigation measures and estimated costs and benefits for measures such as seawalls, flood gates, restoration of natural areas and installation of oyster reefs. Ideally, the report could also provide an overview of the types of measures that could be taken to address the interconnectedness of the natural, built and social systems which are vulnerable to cascading impacts. 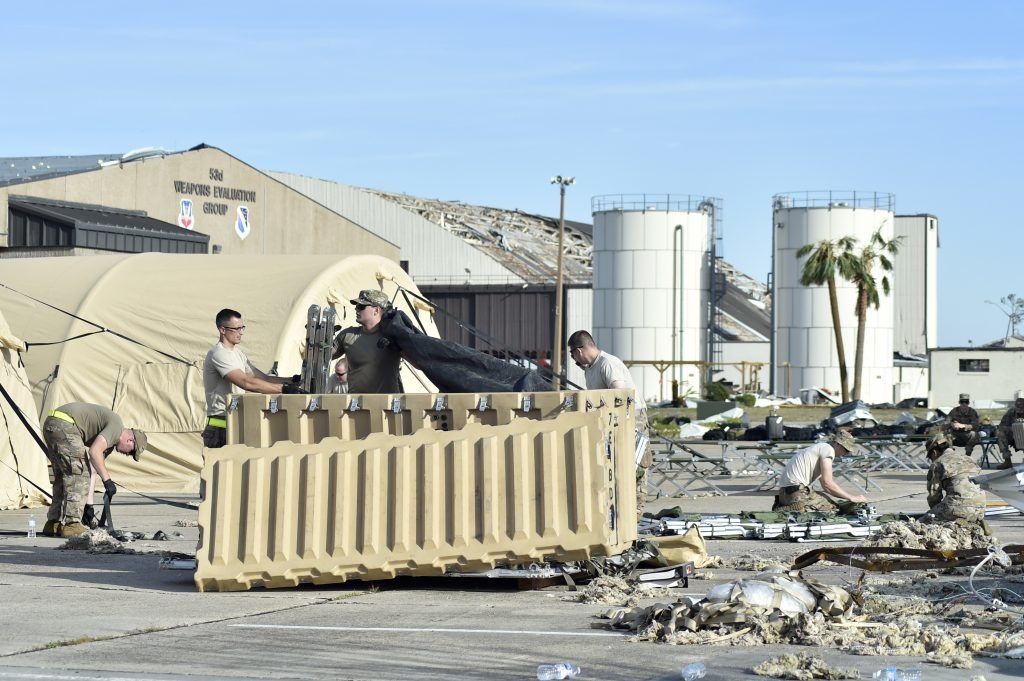 8. Address the Costs of Different Types of Mitigation Measures

Given the estimated cost of damages from Hurricane Florence on Marine Corps’ Camp Lejeune ($3.6 billion) and from Hurricane Michael on Tyndall Air Force Base ($5 billion), and given the adaptation needs particularly for overseas installations, it’s no wonder that Congress asked the Pentagon to estimate the costs of making installations more resilient. DoD can utilize the cost assessment tool in Appendix G of the NAVFAC adaptation handbook to help define the scope and costs of different mitigation measures.

A recent example from work done by Dewberry for Virginia Beach underscores why cost estimates are so important in planning and budgeting. Dewberry found that measures to adapt to sea level rise could cost from $1.71 billion to $3.79 billion over several decades, but the annualized economic losses of doing nothing could be $50 million in 2050. While a tremendous amount of time and effort went into this report, it is exactly the type of analysis that is so helpful for planners and decisionmakers.

9. Assess the Growing Needs for Humanitarian Relief and Disaster Assistance

DoD must include an estimate of the increase in the frequency of humanitarian assistance and disaster relief missions and the theater campaign plans among other aspects that the legislation requests. A recent study confirms that climate change is fueling violent conflicts, migration and refugees. The recent 2019 Worldwide Threat Assessment of the US Intelligence Community again makes the case that climate change is a national security threat, and a threat multiplier when it comes to humanitarian disasters.

The report makes clear that climate change is “a cross-cutting consideration for our planning and decision-making processes“ and not a one-off, separate program. In version 2.0, DoD has the opportunity to provide more depth to the overview of mitigation measures currently in place and what might be necessary to ensure mission resilience. An estimation of the costs of these mitigation measures, at least at some level, ought to also be addressed. 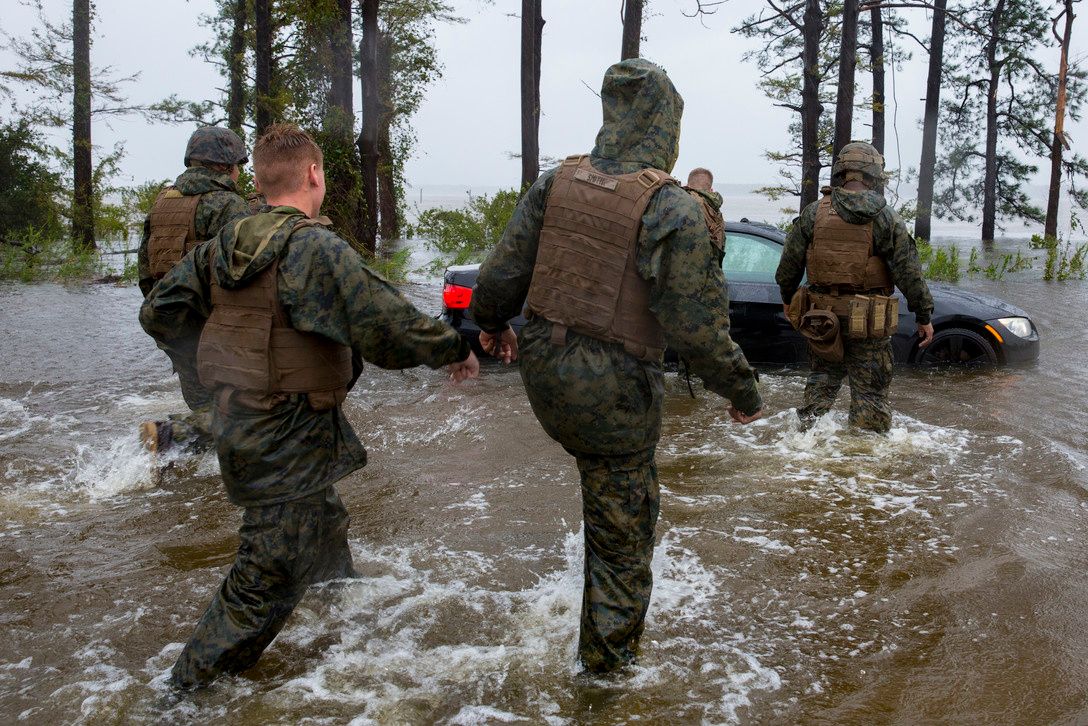 Climate change will continue to strain the nation’s resources, resilience and our military’s mission readiness. The scale of the budget needed to mitigate each of the climate risks for each of the most vulnerable installations will be immense, but the cost of doing nothing will be much greater. The good news is, studies indicate that federal investments in mitigation measures is a wise use of taxpayer dollars and can save $6 in future disaster costs, for every $1 spent on hazard mitigation.

DoD now has the chance for a “do-over” of their climate-change risks report to fill-in the many incomplete and inadequate responses. This vital revision, version 2.0, will be an important contribution to Congress to help members formulate policies and budgets needed to ensure our military’s installations, infrastructure and communities across all armed service branches are climate ready.

The Pentagon has stated that #climatechange is real and is a national security issue. @repadamsmith https://t.co/raOF17aOuC

Shana Udvardy is the climate resilience analyst with the climate & energy program at the Union of Concerned Scientists.