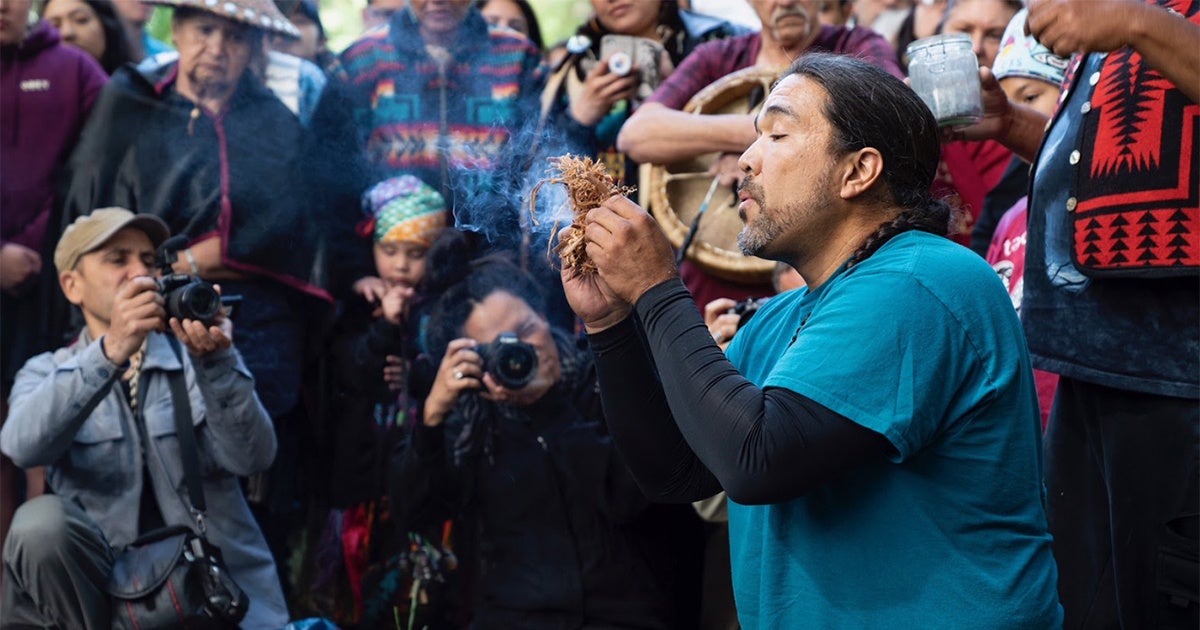 By Jade Begay and Ayşe Gürsöz

Even as the Trump administration rolls back regulations meant to protect Americans from pollution, the EPA recently released a report that finds that people of color are much more likely to breathe toxic air than their white counterparts. The study’s basic findings—that non-whites bear a higher burden in terms of pollution that leads to a range of poor health outcomes—is supported by other similar studies, and underpins the issue of environmental injustice that impacts many politically marginalized communities.

It’s these communities that are hardest hit by the climate crisis––even though they are the least responsible for causing it. In addition, these communities, by design, are most imperiled by environmentally devastating extractive industries like coal mining, tar sands, fracked gas and more. Let’s be clear: Climate change isn’t just a scientific issue—it’s an issue of racial inequity, economic inequity and cultural genocide.

Indigenous peoples around the world are quickly becoming the generation that can no longer swim in their own waters, fish in their rivers, hunt their traditional foods or pick their traditional medicines. The climate isn’t just changing the landscape—it’s hurting the culture, sovereignty, health, economies and lifeways of Indigenous peoples around the world. Yet despite the immense impacts climate change and fossil fuel industries have on Indigenous cultures and ways of life, Indigenous communities are tremendously resilient.

This was strikingly clear at the 17th Protecting Mother Earth conference, where tribal leadership and environmental activists called for a unified front to help find solutions. Hosted by the Indigenous Environmental Network, the Nisqually Indian Tribe and Indigenous Climate Action, the conference provided a space for hundreds to come together to share lessons, celebrate victories and build stronger alliances to defend and protect land, water, the climate and Indigenous rights.

“We Native people will always be here, standing up to protect the land and water,” said Nisqually Tribal Councilman Hanford McCloud during the conference’s opening ceremony. “We will always be the voice of those on the frontlines who continue to fight against the violation of Indigenous treaty rights, self-determination, environmental justice, and climate change.”

It’s essential to note that Indigenous vulnerability and resilience to climate change cannot be detached from the context of colonialism, which created both the economic conditions for climate change and the social conditions that continue to limit the capacity for Indigenous resistance and resilience. Both historically and in the present, climate change itself is thoroughly tied to colonial practices. Greenhouse gas production over the last two centuries hinged on the dispossession of Indigenous lands and resources.

Since the fracking industry began on Casey Camp-Horinek’s reservation in Ponca, Oklahoma, tribal members have experienced a spike in cancer. She says that since fracking began there, her small community averages a death per week. The water wells on her reservation are now too toxic to drink. “They need to understand that what they call resources, we call life sources. We all know that water is life. The years of fish kills related to the fracking and injection wells amount to environmental genocide.” 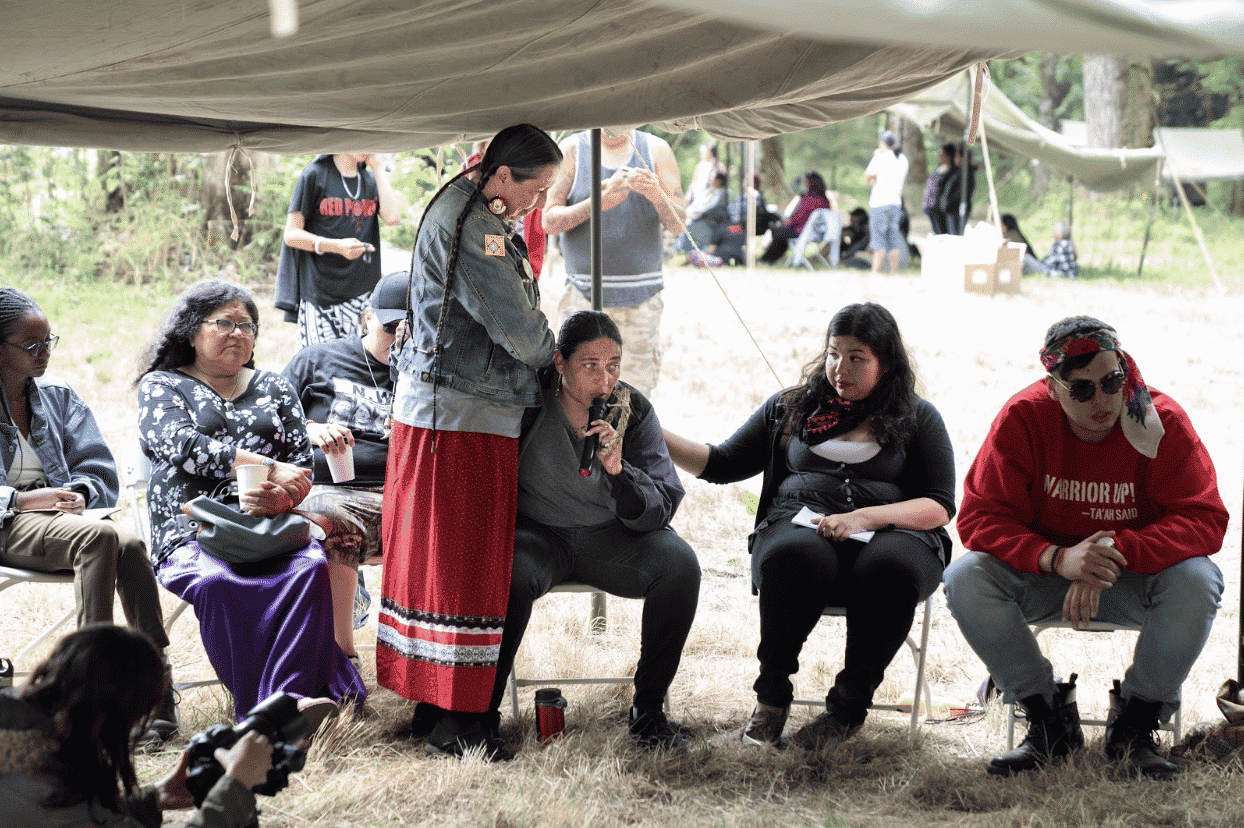 Eriel Deranger, executive director of Indigenous Climate Action, expressed during a press conference that the U.S. and Canada, by further investing in dirty energy projects that infringe on Indigenous rights of Free, Prior and Informed Consent (like Kinder Morgan’s Trans Mountain pipeline, Energy Transfer Partners’ Bayou Bridge pipeline, Enbridge’s Line 3 pipeline, and TransCanada’s Keystone XL pipeline, to name a few) are making decisions and policies that move society further away from a climate-stable future. “They aren’t adhering to international climate commitments,” said Deranger, who is a member of the Athabasca Chipewyan First Nation. “This is an indication that we the people, Indigenous peoples, must be prepared to take real action on climate change and be the leaders for the protection of Mother Earth.”

The conference was held in an especially significant location: Frank’s Landing, named after the late Billy Frank Jr., who led the historical stronghold where the Nisqually Tribe stood up in non-violent direct action during the 1960s and ’70s to defend their way of life and their inherent treaty rights to hunt, fish and gather. The Fish Wars stand today as one of the most important civil rights moments for Indigenous rights in the Pacific Northwest. “We watched our elders get beat up right here. Hauled off,” said Don McCloud Jr., father of Hanford, and the oldest son of Don McCloud Sr., a central leader of the Fish Wars. “We suffered many things. But we’re not here to complain. The struggle still goes on. The battle is still here. We might have won one fight, but we’re here continuing the fight for Mother Earth.” 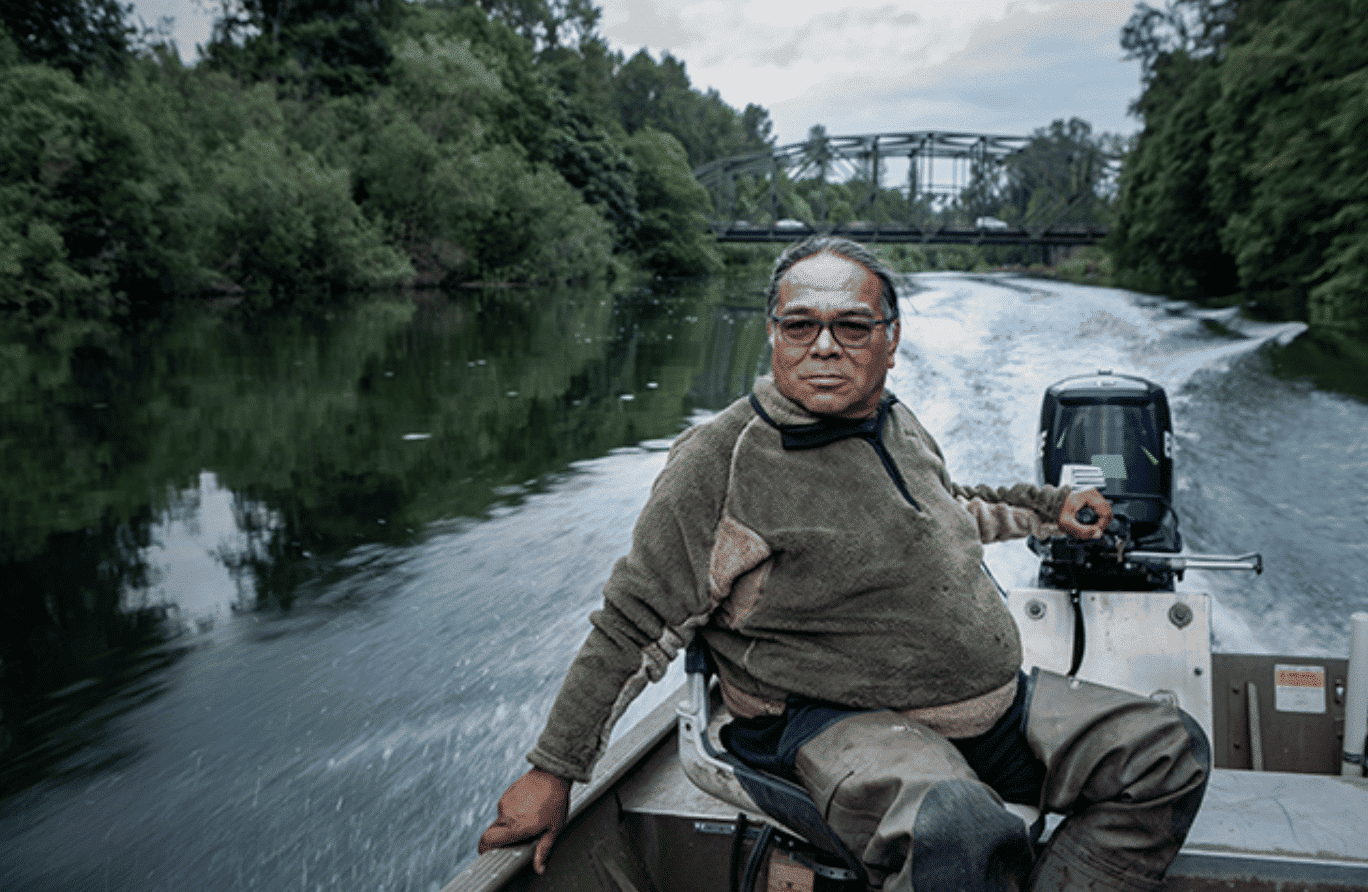 Don McCloud, who grew up during the Fish Wars, shares memories on a boat ride during the PME. Ayşe Gürsöz

The event, which ran from June 28 through July 1, included plenary sessions with key speakers and break-out sessions addressing themes ranging from Just Transition, Climate Justice, Environmental Health, Rights of Mother Earth and more. One particular session, which featured a delegation from Alaska, demonstrated just how dramatic an impact climate change is having on the landscape and traditional lifeways.

Adrienne Blatchford, a member of the Inupiaq Tribe living in Unalakleet, Alaska, said:

“The cost of development is the land. And that right there is so profound to me, because no amount of oil money can pay to relocate our villages or subsidize any kind of living in the way that we have done since time immemorial, it can’t compensate for that. Indigenous people are connected to the food and to the land. Without it we get sick. It’s genetic. It’s something we have to have to provide for ourselves through the land. There is a spiritual connection that we have to these animals and what it provides.” 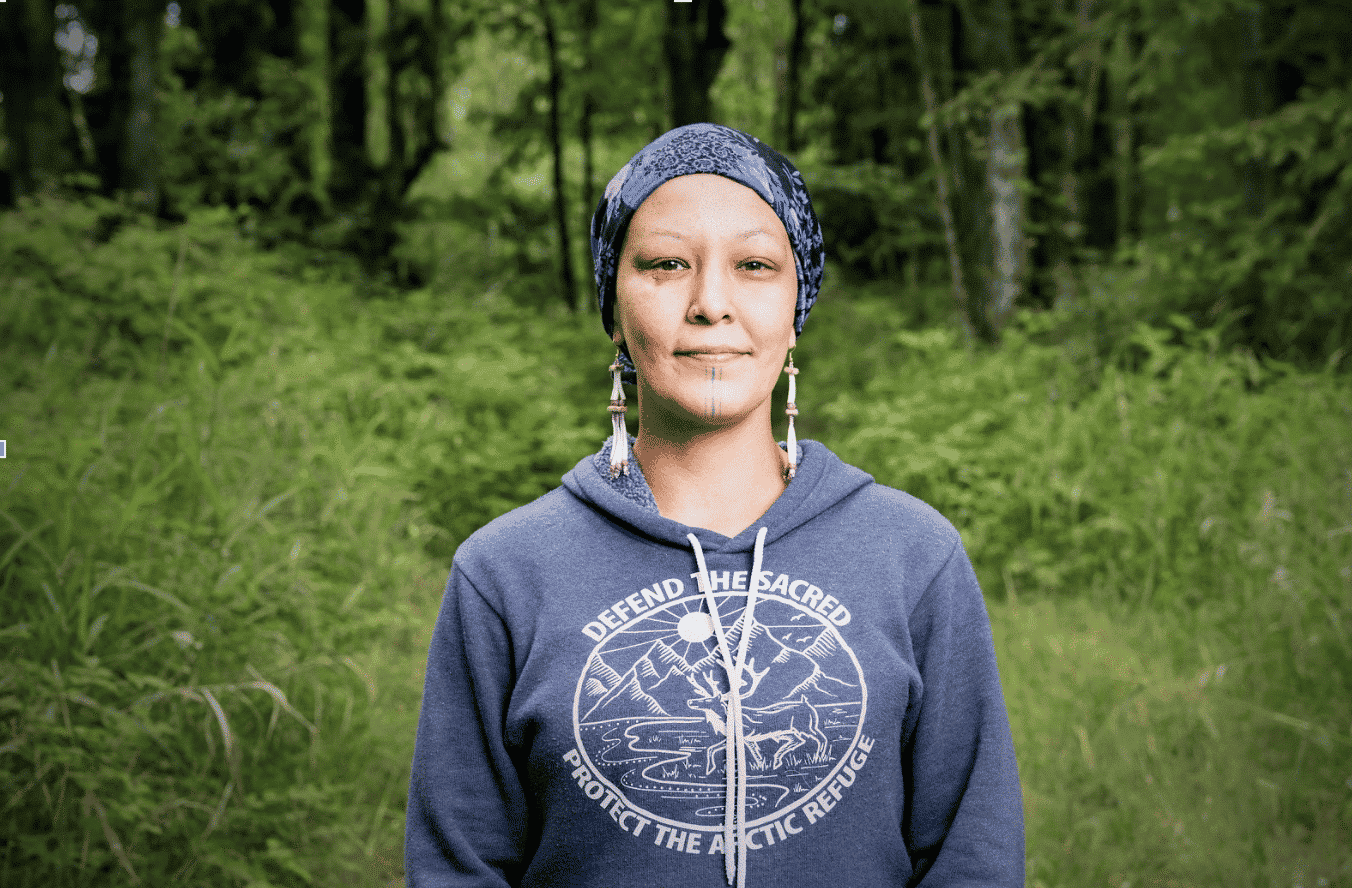 According to Blatchford and her team at Native Movement, climate change is drastically changing the landscape, which translates to major disruptions of deeply rooted cultural traditions. There are fewer moose, beavers and salmon, which are traditional sources of food. In the fall and winter, due to starvation, wolves began to attack dogs and people. The rapidly melting permafrost is causing trees to fall down, and fewer trees mean less shade, which causes more melting. Even flowers that are supposed to be pink and blue are now turning up white. Blatchford’s colleague Misty Nickoli, a member of the Denaá and Tsimshian tribes, adds that “those details are important because it’s everything. From our land to animals to our weather to our water. When all those things are upset, the people, our health, gets out of balance and we get sick too. And when we don’t have our food to take in as our medicine, we stay sick and we get sicker.”

Indigenous communities around the world have struggled to maintain their cultural identity and cultural practices through initial and ongoing periods of colonialism, genocide and forced assimilation. A USDA report, Climate Change and Indigenous Peoples: A Synthesis of Current Impacts and Experiences, notes that “this history has provided many indigenous communities with valuable adaptation experience to inform climate-change adaptation, resilience and resistance.”

Once such instance is the Black Mesa Water Coalition, which first formed in 2001 to address issues of water depletion, natural resource exploitation and public health within Navajo and Hopi communities. “Our emphasis is on healing and decolonization––as individuals, communities and as our culture,” said Jihan Gearon, a member of the Diné nation and Executive Director of Black Mesa Water Coalition, during a plenary presentation. “How can we transition our economy to reflect those things? We have a term ‘Just Transition.’ We know the situation we’re in right now is bad, and we know where we want to go. Culture revitalization. Healthy communities, lands and water. Just Transition means how do we get from A to B.” 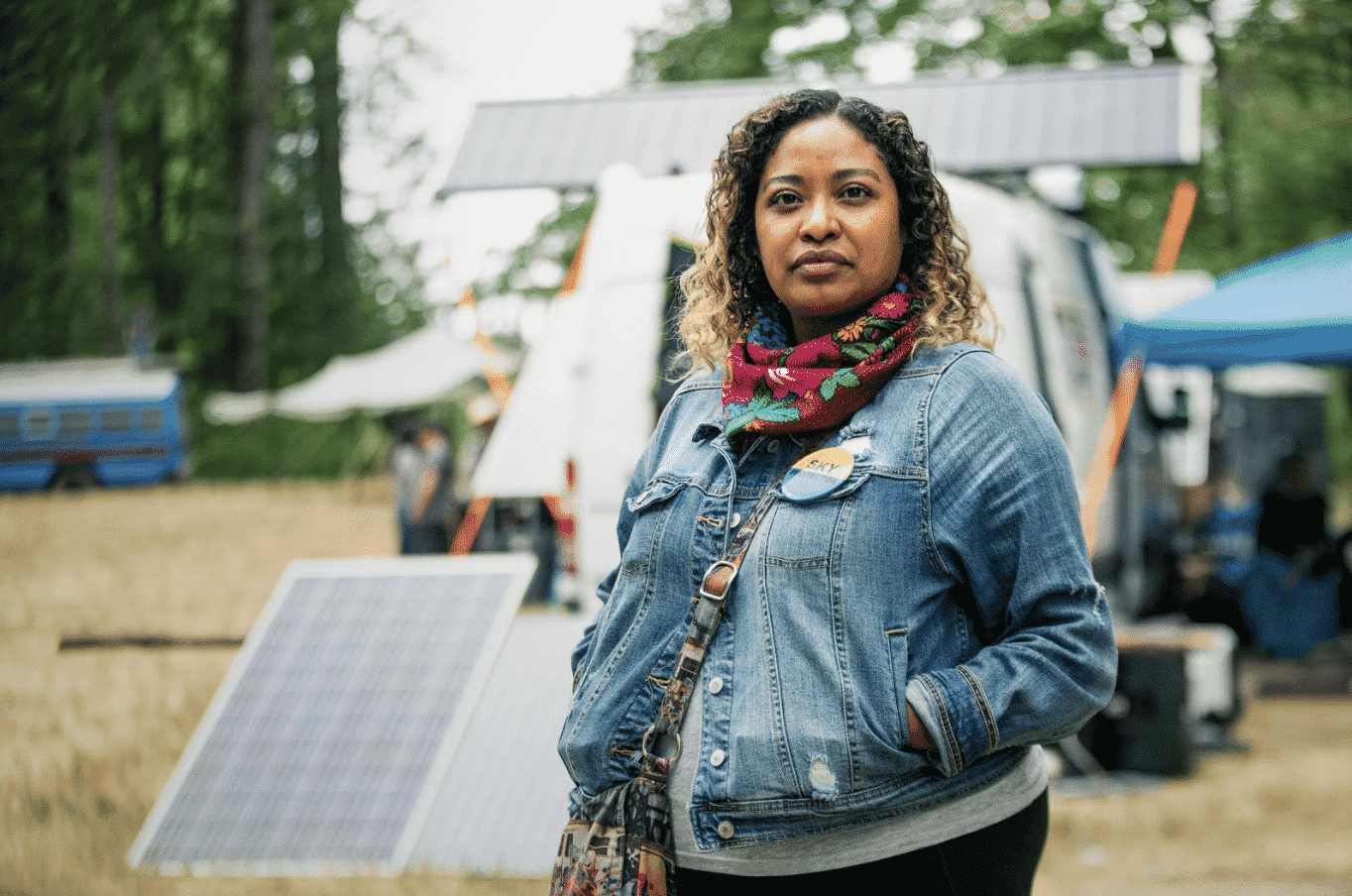 Even the seemingly groundbreaking Paris agreement neither includes human rights in its text nor acknowledges Indigenous rights—even though lands and waters stewarded by Indigenous communities make up 80 percent of the world’s biodiversity. What we need is for climate policy and the overall climate movement to address problems of inequality, because climate change is just as much a social issue as it is an environmental issue.

We need to ask ourselves what kind of world we want to live in. And who is going to lead us into that world? Sadly, we cannot count on the Trump administration. We also can’t look to so-called climate heroes such as California’s Gov. Jerry Brown, whose climate policy leans on the market-based carbon trading systems, which are widely criticized as false solutions that further exploit Indigenous lands and peoples.

From Standing Rock to the pipeline fights happening across the U.S. and Canada, Indigenous peoples are leading the resistance to extreme fossil fuels. We all need to stand with them and call for grassroots solutions that center Indigenous traditional knowledge. Our next opportunity to do this is in September during the Global Climate Action Summit, where grassroots groups from across the nation and world will host a week of action to counter the false solutions being celebrated there. 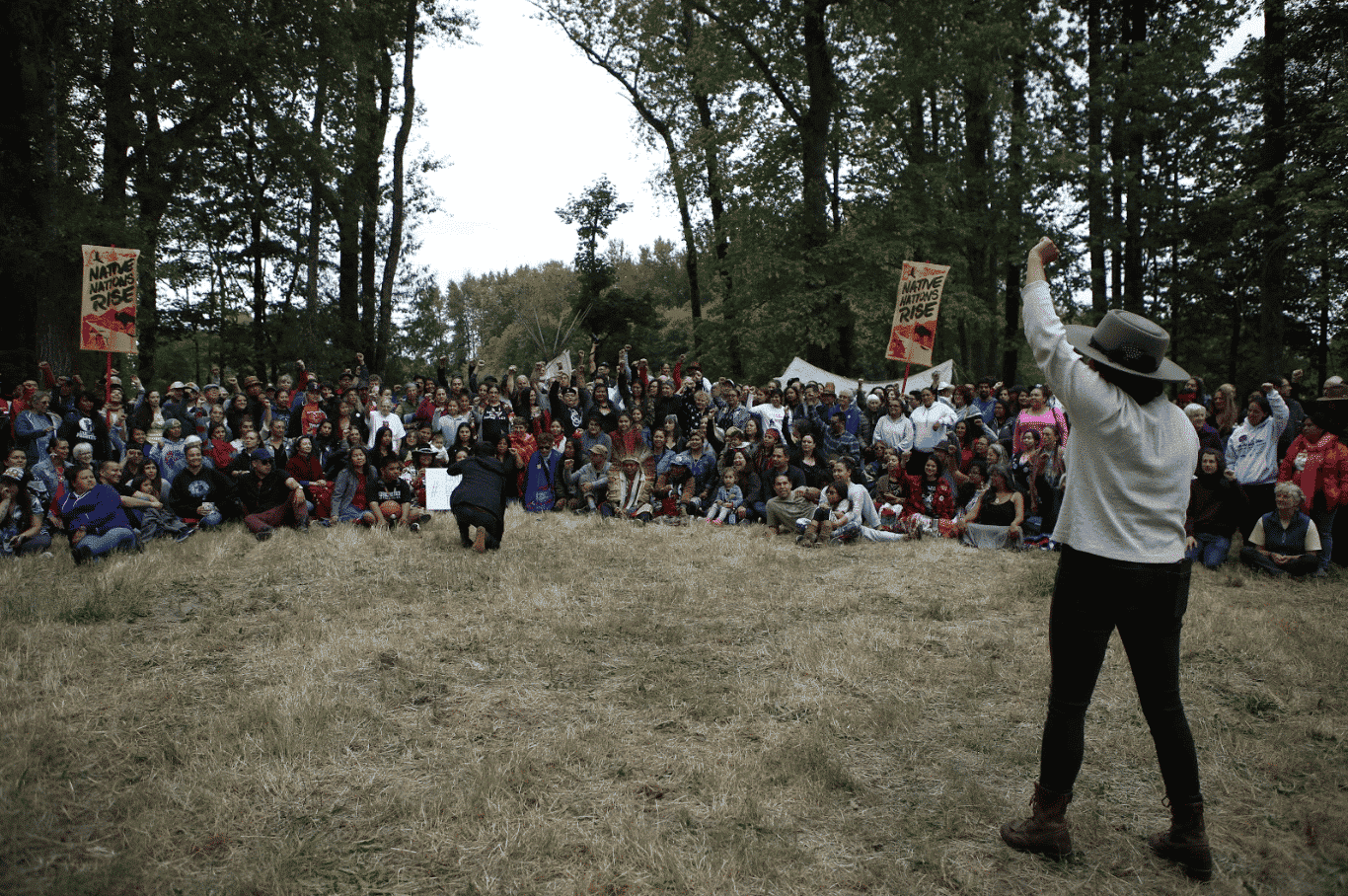 Jade Begay (Diné and Tesuque Pueblo) is a multimedia artist working with the Indigenous Environmental Network (IEN) as the Communications and Digital Director and the Senior Producer at Indigenous Rising Media, a media project of IEN. Prior to IEN, Jade worked with 350.org as the Multimedia Producer and with Resource Media, as the Justice and Sustainability Communications Fellow. Jade is a graduate of Naropa University (MA Environmental Leadership) and Columbia College Chicago (BA Film and Video). Currently, Jade is co-directing “Blood Memory Experience,” a VR/AR project that explores the connections between identity, land and storytelling.

Ayşe Gürsöz is a multimedia producer working at the intersection of climate change, human rights and corporate accountability. Ayşe is the Communications Manager for Rainforest Action Network’s Climate and Energy team and volunteers with Indigenous Rising Media, a media project of the Indigenous Environmental Network. In the past, Ayşe has worked with Al Jazeera’s AJ+ as a News Producer and with Public Advocates as a Digital Strategist. Ayşe is a 2017 Media Consortium fellow of the New Economies Reporting Project and her photography has been featured in ColorLines, the Amplifier Foundation’s “We The People” campaign, and the film “Awake: A Dream From Standing Rock.”