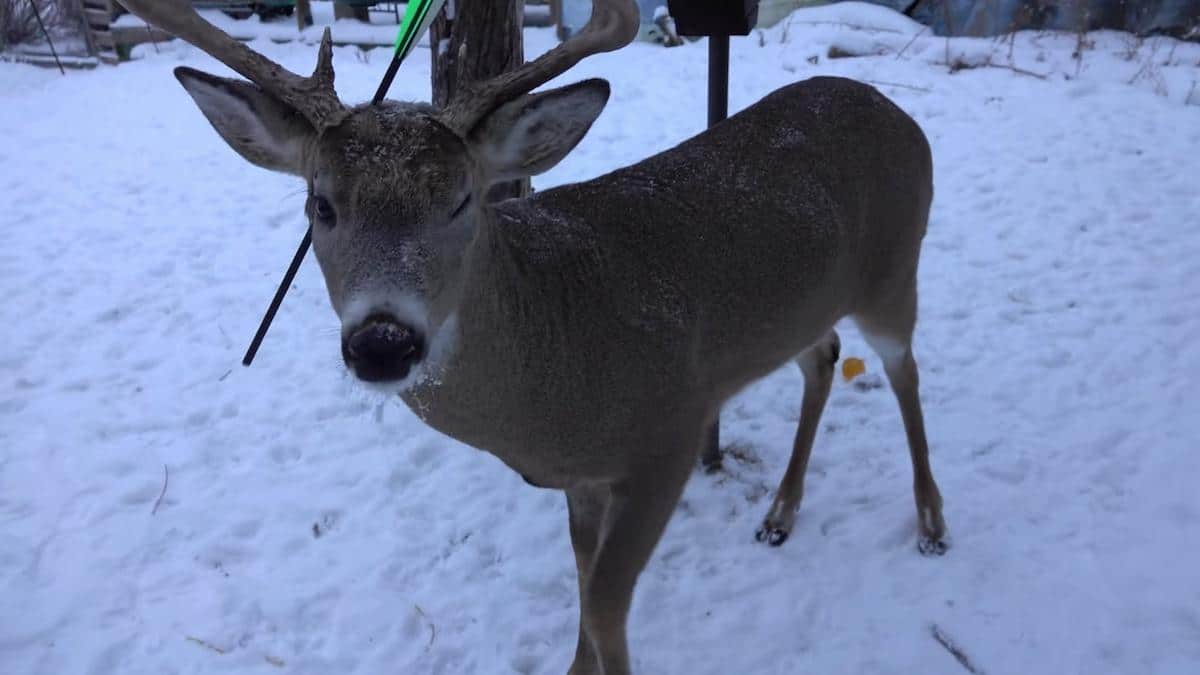 Carrot the Magic Deer and the Orange Heart Club / Facebook

A Canadian wildlife photographer is working to help a friendly deer named Carrot who suffered a shocking injury.

Lee-Anne Carver of Kenora, Ontario has known Carrot for three years, when he first began to pass through her yard as a fawn, she told CTV News. She said he was unusually friendly and even became friends with her golden retriever.

“He didn’t hold the normal characteristics of a deer. It was something else and I can’t explain it,” Carver told CTV News.

But then something happened to make Carrot stand out in a different way. On Dec. 9, Carver’s husband went out into the yard to see the deer and came back crying, CBC News reported. Carrot had been shot through the head with an arrow.

“It was very disturbing to see,” Carver told The Guardian. However, Carrot seemed unaffected by his dramatic injury.

“[H]e was still acting like his normal self,” she said.

The consensus from hunters and wildlife officials, Carver told CTV and CBC, is that the bolt missed any vital arteries and is now keeping the deer alive by cauterizing the wound and preventing bleeding.

“We all have a natural inclination to take it out, but that’s not necessarily the best medicine,” she told CBC News.

Carver started a Facebook Group called Carrot the Magic Deer and Orange Heart Club to raise awareness about his plight.

She said that she (and Carrot) had received support from around the world, including letters from as far away as Australia and South Africa.

“The internet is a place where everybody wants to argue about something. But Carrot seems to be unifying people,” Carver told The Guardian. “It’s been so overwhelming so see all of this compassion, that’s sorely lacking in the world right now. There’s so much suffering out in the world these days – and Carrot’s suffering too – but he’s become bigger than that. He’s given us something to focus on right now, and something to love. And that means a lot.”

Carver said she was originally worried Carrot’s story would spark controversy, because his injury likely has its origin in a 2013 amendment to Kenora’s bylaws that permits the shooting of crossbows within city limits, CBC News reported. Carrot was shot with a lethal hunting carbon arrow, and the angle suggests he was shot from a window or deck.

“It appears to be malicious to me, like an act of animal cruelty,” she told CBC News.

While she thought hunters might react negatively to her images, in fact she and Carrot have received support from the hunting community.

“On this one, it brought cultures together, hunters and non-hunters,” she told CBC News, “everybody’s had this unified voice for him, of compassion and care.”

On Wednesday, police and Ontario natural resources staff arrived on Carver’s property and managed to tranquilize Carrot and cut off the top half of the arrow shaft, The Guardian reported.

In a Facebook update, Carver said the hope was that the rest of the arrow would slide out once Carrot had healed.

Carver said she went out looking for Carrot the evening after the procedure and found him relaxing with a friend.

“They were chillin’ keeping company and grazing,” she said.