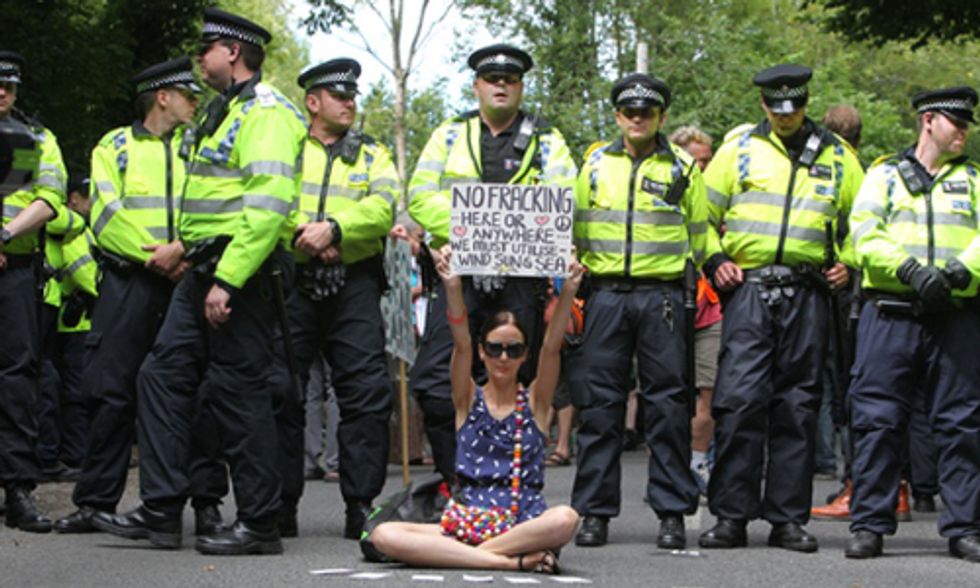 Fossil fuel companies are getting more brazen in their claims, keeping the UK's advertising oversight board, the Advertising Standards Authority (ASA), busy sorting through them.

A woman holds up a sign at a fracking protest march in Balcomb, England. Fracking advocates hope they'll win over people like her with misleading ads.
Photo credit: Shutterstock

We recently reported that the ASA ruled against Peabody Energy for implying that its coal was producing "clean" energy.

Dallas-based Breitling Energy went well beyond implication, attempting to seduce British citizens into a love affair with fracking. The ASA has found that an ad run in UK newspaper The Telegraph in February, was misleading, reports the Guardian.

The ad was in the form of a letter from CEO Chris Faulkner, an evangelist for fracking, who has written a book and produced a film on its benefits. It claimed the Britain suffered from a "near-catastrophic" gas shortage in early 2013 and that fracking could offer "decades worth of natural gas," "millions of pounds in tax revenues," "freedom from interruptions and stoppages as a result of Russia's political games with your gas supply," "lowering energy prices for millions," and "reducing greenhouse emissions by replacing coal with natural gas for energy."

After a reader complained that the ad exaggerated the gas shortage, that the benefits of fracking were unknown, and that Russia didn't provide any of the UK's gas supply, the ASA investigated and found against Breitling on all the charges. It told Breitling not to run any ads in the future without hard evidence.

Breitling produced press reports to back up its claim about gas supplies running short but it acknowledged that National Grid and the Department of Energy and Climate Change had said energy markets functioned normally at the time. Breitling cited David Cameron's assertion that fracking had 'real potential' to cut energy bills but the ASA decided its claims about the virtues of fracking were misleading and exaggerated.

Faulkner and Breitling vice president Thomas Miller were unrepentant and swaggering, attacking both the ASA and the Guardian, one of the UK's most reliable and respected news sources, according to Yahoo! Finance.

Referring to ASA also finding against a pair of American Apparel ads it deemed too suggestive, Miller said, "Fracking and sex. The Guardian editors sure know a good news story when they see one. You can see by what they chose to run and not run, how the media has over-controlled this debate. The sex ads were only covered because they were racy, that’s all. There is no news value there whatsoever."

In fact, fracking has been a hotly debated and controversial in the UK where shale exploration sites are plentiful but the dense population means more potential human impacts. There have been numerous large-scale protests against fracking in the UK. And while England is known for its racy tabloids, the Guardian isn't one of them.