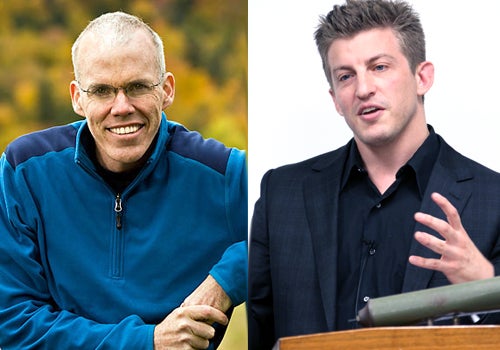 After one hour and thirty-nine minutes of watching Bill McKibben “debate” Alex Epstein on whether fossil fuels pose a risk to the planet, my daughter and I were outraged that Epstein is capable of taking such a humanistic, anthropocentric position on the issues regarding the health of our planet.

Nothing could better demonstrate Epstein’s complete lack of a biocentric viewpoint and understanding of culture, science and humanity than his statement regarding the Maldive Islands—an island nation south of India consisting of 1,200 islands, 200 of which are inhabited. If you know anything about the plight of Mohamed Nasheed and his fight to bring democracy to his homeland and protect his country from the rising seas, you would clearly agree that this statement sums up Epstein’s inability to properly assess anything to do with what’s best for our planet, its people or any other species:

“And as for the Maldives, I don’t think the evidence is what Bill says it is, but in any case, they need to industrialize too.”

I encourage you to take the time and watch this “debate.” McKibben provides essential data regarding the threats of climate change and the solutions that can get us out of this mess.

“My problem is, the depth of trouble from climate change is so great it’s very hard to make it coherent in a few short minutes. So, I guess I’ll be speaking fast,” said McKibben in reference to tonight’s debate.

We’re looking forward to streaming this debate live on EcoWatch.org. While the debate is going on, we encourage you to comment below.

Last night I came across a post on Facebook promoting a debate between founder of 350.org Bill McKibben and fossil fuel loving Alex Epstein.

McKibben kindly replied to a late night email from me and provided this statement regarding the debate:

“I’m not a great debater, and I guess these guys have been preparing for this all fall, so it makes me a mite nervous, but I will do my best as always to explain the trouble we’re in. The topic we agreed on is ‘fossil fuel is a risk to the planet,’ and I think that’s the most important message I can imagine.”

Check out the promo video for the debate:

This is certainly a debate not to miss.