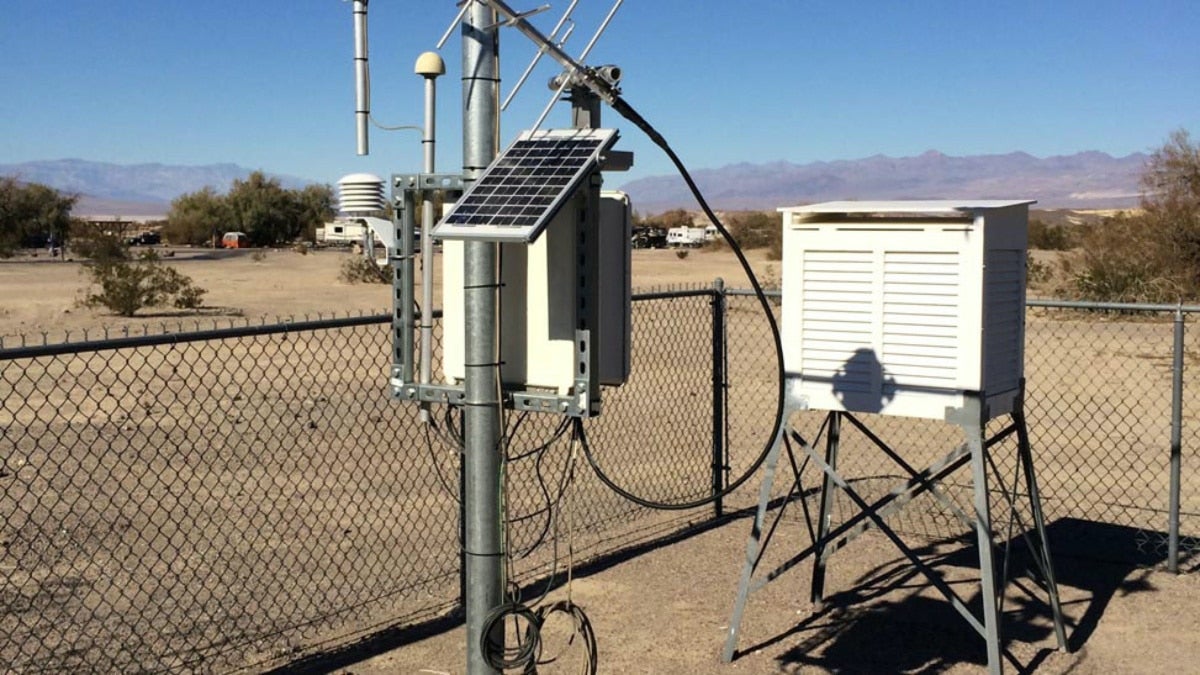 According to weather records experts Christopher Burt, who wrote the comprehensive weather records book “Extreme Weather,” and Maximiliano Herrera, who tweets under the Twitter handle Extreme Temperatures Around the World, the observation may be the hottest reliably recorded temperature in world history, breaking the 129.2 degrees Fahrenheit readings at Death Valley in 2013 and in Kuwait in 2016.

Cautions About the Record

Herrera and Burt are cautious about accepting the new record set at the Furnace Creek Visitor’s Center in Death Valley. The measurement came in mid-August. But extreme high temperature records are much easier to set in July, which is the hottest month of summer. Also concerning was the fact that Sunday’s temperatures at Furnace Creek showed some odd jumps during the day. (See the raw high-resolution data here by choosing a time up to six days in the past from the drop-down menu, then choosing “Decoded Data.”)

However, there were some relevant wind direction changes at Furnace Creek that occurred during these temperature jumps, bolstering the idea that the temperature changes were real. The National Weather Service noted that transient high cirrus clouds may have played a role in the temperature changes. Further support for the 130 degrees Fahrenheit reading at Furnace Creek came from the nearby Stovepipe Wells site in Death Valley, which peaked at 125 degrees Fahrenheit on Sunday. That site, which lies in a cooler part of the valley and is 200 feet higher in elevation, is typically three to five degrees cooler than the Furnace Creek site.

The Greenland Ranch USWB weather shelter in Death Valley, California, site of the official world record extreme temperature of 134 degrees Fahrenheit on July 10, 1913. Photo is the oldest known photograph of the weather station (circa late 1910s to as late as 1921) and is looking west. NWS Las Vegas archives via Chris Burt

But the observation will not count as an official world record. In 2013, the World Meteorological Organization officially decertified the official all-time hottest temperature in world history, a 136.4 degrees Fahrenheit reading from Al Azizia, Libya, in 1923. (Burt was a member of the WMO team that made the determination.) After the abandonment of the Libya record, the official world record was given to a 134 degrees Fahrenheit measurement taken at Death Valley on July 10, 1913.

However, this record has been strongly disputed by Burt and Herrera.

“The old Death Valley record from July 1913 is 100% bogus (not just 99.9% such), as are all other temperature readings of 130 degrees Fahrenheit or higher from Africa in the past,” Burt said.

Burt wrote a detailed 2016 blog post at Weather Underground challenging the 1913 record at Death Valley, explaining that official readings of 134, 130, and 131 degrees Fahrenheit taken on July 10, 12, and 13, 1913 were likely the result of an inexperienced observer. In order for the 1913 Death Valley record to be decertified, though, an official World Meteorological Organization investigation committee would have to be assembled to look into the matter, a years-long process for which there is currently no motivation.

The only other temperature of at least 130 degrees Fahrenheit officially recognized by the World Meteorological Organization is a 131-degree reading at Kebili, Tunisia, set July 7, 1931, which is considered to be Africa’s hottest temperature.

A Weird Weather Day in California

“I’m coming around to thinking that this 129.9° reading just might be for real,” Burt said. “For one thing, the weather today in California has been unique. All kinds of strange local weather occurred. In fact, the folks at most of the state’s National Weather Service offices are saying there has never been a day like today in recorded history in the state: all kinds of weird dynamics at work and the models just can’t handle the details.”

Yale Climate Connections contributor Bob Henson had these observations on Sunday’s weird weather in California: “Among the strange developments over the weekend in California were a highly unusual round of pre-dawn thunderstorms in the Bay Area on Sunday, with only scant rain but profuse lightning that started multiple new wildfires. More than 4,800 lightning strikes were recorded in California on Saturday alone. Also on Saturday, a fire-based thunderstorm (pyrocumulonimbus) in Lassen County spawned what appear to be multiple fire whirls and ‘fire tornados,’ as indicated by radar and documented in photos and videos. The storm prompted what is apparently the first-ever NWS tornado warning related to pyrocumulonimbus. It will take further study to establish how many vortexes developed and how many might have been fire whirls (smaller-scale, shorter-lived spin-ups akin to dust devils) versus more unusual fire tornadoes, which extend up into a pyrocumulonimbus and which can generate surface winds of more than 100 mph.

“These events are related to an infusion of moisture from the tropical northeast Pacific, some of it from ex-Hurricane Elida, coupled with one of the strongest, hottest upper-level domes of high pressure ever recorded across the western United States in August. When such air is forced to descend, it warms up even more, which can lead to record-setting temperatures at the surface.”