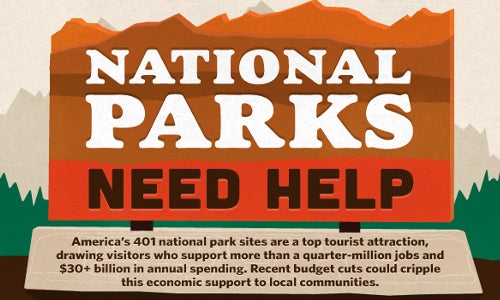 As Congress approaches another deadline on the federal budget, a new report, released by Environment America exposes the challenges facing the country’s parks, seashores, monuments and historic sites as a result of mounting funding cuts to the National Park Service. 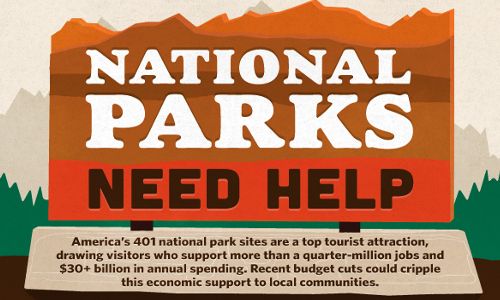 “From Yellowstone to the Everglades, our country’s parks saw seasonal staffing slashed, educational programs cancelled and in some instances saw some sections of parks closed to visitors entirely this past summer,” said Aaron Weil, conservation advocate with Environment America. “We don’t want death by a thousand cuts for our national parks.”

Our national parks, seashores, trails and historic sites provide critical habitat for wildlife, ensure clean drinking water for communities across the country, and offer endless recreational opportunities. Visitors to this country’s parks have been enjoying the chance to hike canoe, camp, or just take in the awe-inspiring beauty of these iconic landscapes for more than 100 years.

In addition to national parks being closed during the government shutdown last year, 2013 was the third straight year Congress cut funding to the National Park Service operating budget. Additional cuts from the March sequester make for a 13 percent reduction in funding for our parks in todays dollars over this period.

Infographic courtesy of the

The report, Death by a Thousand Cuts, looks at individual states’ National Parks statistics and gives concrete examples of how each state’s Parks have been affected by defunding, such as:

“Let’s give our parks a new start in 2014,” added Weil. “If we continue on this path, our grandchildren could be forced to explore parking lots and fracking wells instead of river valleys and mountaintops.”

“In addition to their wealth of beauty and wonder, our parks generate more than $30 billion in revenue every year, and support more than 250,000 jobs” said Weil. “Defunding our parks is like shooting ourselves in the foot.”

While the budget deal passed in December may allow for some increase in the parks budget, it’s up to congressional spending committees to decide the actual funding levels this month.

“We urge Congress to stand up for our National Parks by providing the resources and funding they desperately need during the upcoming budget negotiations,” Weil concluded. “America’s park lovers are counting on it.”