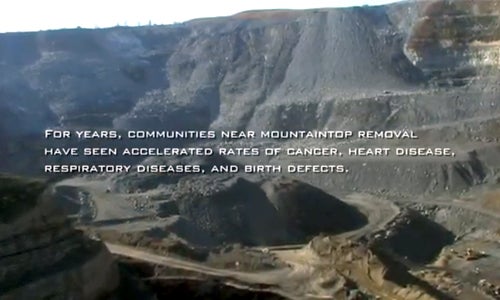 It’s time to fully understand the effects of mountaintop removal mining on the health of our citizens.

“Dear Sen. Rockefeller, please introduce the ACHE Act in 2014,” said West Virginia veteran Bo Webb in a recent appeal, citing numerous studies on birth defects, cancer and depression in the coalfields. “Nothing in the Surface Mine Control and Reclamation Act (SMCRA) of 1977 protects human health from the effects of constant blasting and its toxic fallout of fine particulates of silica, aluminum and other toxins.”

According to Webb, recipient of the Purpose Prize and a resident under a mountaintop removal operation, “the ACHE Act is the only bill ever introduced in Congress that addresses “the myriad of health issues in mountaintop removal mining communities specific.” He added: “The ACHE Act calls for an immediate freeze on new MTM [mountaintop mining] permits only, thereby protecting current workers jobs. In conjunction with the freeze on new permitting, the ACHE Act calls for a health study in MTM communities to be conducted by the National Institute of Environmental Health Sciences.”

Never has Sen. Rockefeller’s leadership on health and safety issues been more needed in the coal mining areas of central Appalachia.

In 1977, President Jimmy Carter begrudgingly signed SMCRA, calling it a “watered down” bill and “disappointing effort.” “The President’s other main objection to the bill,” wrote the New York Times, “is that it allows the mining companies to cut off the tops of Appalachian mountains to reach entire seams of coal.”

Six months after his clarion call for “coal to embrace the future,” Byrd reminded our nation in 2010 that West Virginia’s most valuable resource was its people, and set out the terms of unacceptable mining practices:

The industry of coal must also respect the land that yields the coal, as well as the people who live on the land. If the process of mining destroys nearby wells and foundations, if blasting and digging and relocating streams unearths harmful elements and releases them into the environment causing illness and death, that process should be halted and the resulting hazards to the community abated.

According to an ACHE Act fact sheet, “residents face accelerated rates of cancer, respiratory diseases and birth defects within their communities near this destructive form of mining.”

Rockefeller is no stranger to “time outs”—he called for one a few years ago during the debates on the U.S. Environmental Protection Agency’s (EPA) carbon rules, in order to pursue legislative options. In 2012, in explaining his vote against the Sen. Inhofe (R-OK) resolution of disapproval of the EPA’s rules on mercury and air toxics, Rockefeller added:

I oppose this resolution because I care so much about West Virginians.

Without good health it’s difficult to hold down a job or live the American dream. Chronic illness is debilitating and impacts a family’s income, prosperity and ultimately its happiness.

The annual health benefits of the rule are enormous. EPA has relied on thousands of studies that established the serious and long term impact of these pollutants on premature deaths, heart attacks, hospitalizations, pregnant women, babies and children.

Maybe some can shrug off the advice of the American Academy of Pediatrics and others but I cannot.

According to Webb and other West Virginia residents, such a commitment to health must now be applied to mountaintop removal areas.

Again, Rockefeller is no stranger to the deleterious impacts of strip-mining. Campaigning at the Morris Harvey College, on Jan. 15, 1972, he delivered an important speech that still resonates today:

“Government has turned its back on the many West Virginians who have borne out of their own property and out of their own pocketbooks the destructive impact of stripping. We heard that our Governor once claimed to have wept as he flew over the strip mine devastation of this state. Now it’s the people who weep. They weep because of the devastation of our mountains, because of the disaster of giant high walls, acid-laden benches, and bare, precipitous out-slopes which support no vegetation at all but erode thousands of tons of mud and rocks into the streams and rivers below.

“We can be a powerful force toward both halting the destruction of our state and also toward coming up with economically sound alternatives that will demonstrate best to all people that we have long-term economic interests of the state at heart.”

Decades later, it’s time for Sen. Rockefeller to step back in the forefront of this issue.

I grew up running free through the mountain woods of Southern West Virginia, naming every rock and every tree. I knew them by heart. I imagined myself “Queen of the Forest” filled with creatures and people that were part of my kingdom. I was on call for their alarm, ready to defend and protect them. I was the first Warrior Princess.

I remember you growing up too. You were on TV, all tall and skinny. I believe you are still that now. I was about five years old when you were elected Governor of our beautiful state. I remember thinking what big and funny glasses you had. My oldest sister ran into you at a WVU game one time, or was that the Mountaineer mascot?

When you first ran for office you were opposed to strip mining. You have recently lectured the coal industry for their negligence and legal responsibility of care for the coal miners. I applaud you for this! There is no doubt in my mind that you have the heart of a good man. You stand to respect and protect our hard-working coal miners. I could never have that job. I would be scared out of my mind to go into the crack of the Earth, dark, cramped, breathing dust day in, day out. I wouldn’t last a minute. I often wonder if people really do think about how the lights stay on.(?) Do they think of us? Do they think of West Virginians?

Why did you choose to come back to WV after your VISTA Volunteer position? You could have gone to any other state and built a successful career, but you stayed here. Why did you pick us? Was it because you fell in love with the coal miners themselves? Was it their extreme dedication, commitment and enduring strength? I like to think that, but I also like to think you fell in love with the natural beauty of this lovely state and its good people. Perhaps I am biased but I believe your honor lies in your willingness to help others, and perhaps that is why you chose WV.

Senator Rockefeller, I call on you to speak the truth about the horrible practice of mountaintop removal. Embrace what you first felt was right. MTR doesn’t employ traditional coal miners. They do not go under the ground and leave their sweat on the ground on their way out. MTR employs temporary demolition crews. This type of mining practice doesn’t create very many jobs, but it is the cause of thousands of underground mining jobs lost; and it is killing the people who live around it.

Senator Rockefeller, I implore you to introduce the ACHE Act (HR 526) in the U.S. Senate today before another child has to be born with birth defects; or another husband has to watch his wife suffer from cancer and die in front of him. A great body of peer reviewed research shows that people living near mountaintop removal are suffering and dying at a much greater rate than anywhere else in the USA. Speak for those who are too afraid to raise their own voices. Speak so change can come that will protect ALL WEST VIRGINIANS whether they are coal miners or not.

With Great Admiration and Respect,