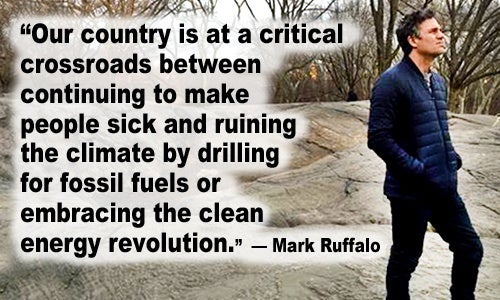 Dear President Obama, The Clean Energy Revolution is Now, narrated by 3-time Academy Award nominated actor Mark Ruffalo, calls on President Obama to ban fracking and join the “anti-drilling” majority growing across the U.S. Oceans 8 Films is excited to announce the film’s premiere in Washington, DC on March 18, as part of the Environmental Film Festival, at the National Geographic headquarters, followed by a 30-day screening tour in March and April. 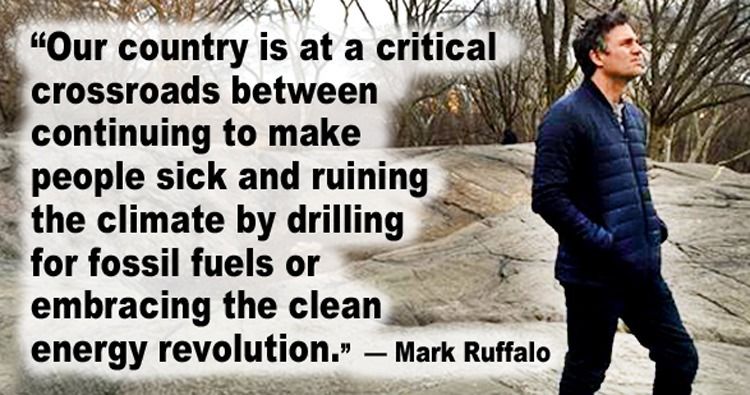 Executive produced and narrated by actor/activist Mark Ruffalo and produced by filmmaker and explorer Jon Bowermaster, Dear President Obama takes a cross-country look at drilling. Highlighting its variety of contaminations, the stories of its victims and the false promise of an economic boom, the film focuses on clean energy solutions that would allow us to proceed towards a future that does not rely on yet another dirty fossil fuel extraction process. Interviews with scientists, economists, health professionals, geologists and whistleblowers provide the core narrative of the film. Its producers hope to convince the current president and those that will follow to join the “anti-drilling” majority growing across the U.S. and call for fossil fuels to be kept in the ground.

“Though nominally targeting the current President,” says Bowermaster, “the message of the film is aimed at every elected official in the U.S. ‘Keep fossil fuels in the ground’ should be the new mantra for them all.”

Since 2008, under President Obama’s watch, the drilling and fracking industries have boomed across the U.S. One result is that today, more than 17 million people live within a mile of at least one oil or gas well, putting their livelihoods, health and property values at risk. Every race, culture and socio-economic class has been impacted, from urban dwellers to the suburbs, rural America to its coastlines. Fracking supporters contended this rush would create a newfound American “energy independence.” In fact, with oil and gas prices plummeting during the past year, all the boom seems to have done is slow progress toward investing in renewable energy sources.

“Our country is at a critical crossroads between continuing to make people sick and ruining the climate by drilling for fossil fuels or embracing the clean energy revolution,” says Ruffalo.

“We can and must power our country with renewable energy from the wind, sun and water, which will reinvigorate our economy with jobs and prosperity. Dear President Obama tells the stories of the harm oil and gas drilling is causing Americans across the country and sets forth the importance of building a bright, clean energy future now. In his remaining time in office, we are asking President Obama to be a visionary clean energy leader and to help the millions of Americans hurt by drilling and fracking.”

The screening tour was organized by Food & Water Watch and other environmental organizations across the U.S.

Anderson Cooper Takes In-Depth Look at ‘The King of Coal’