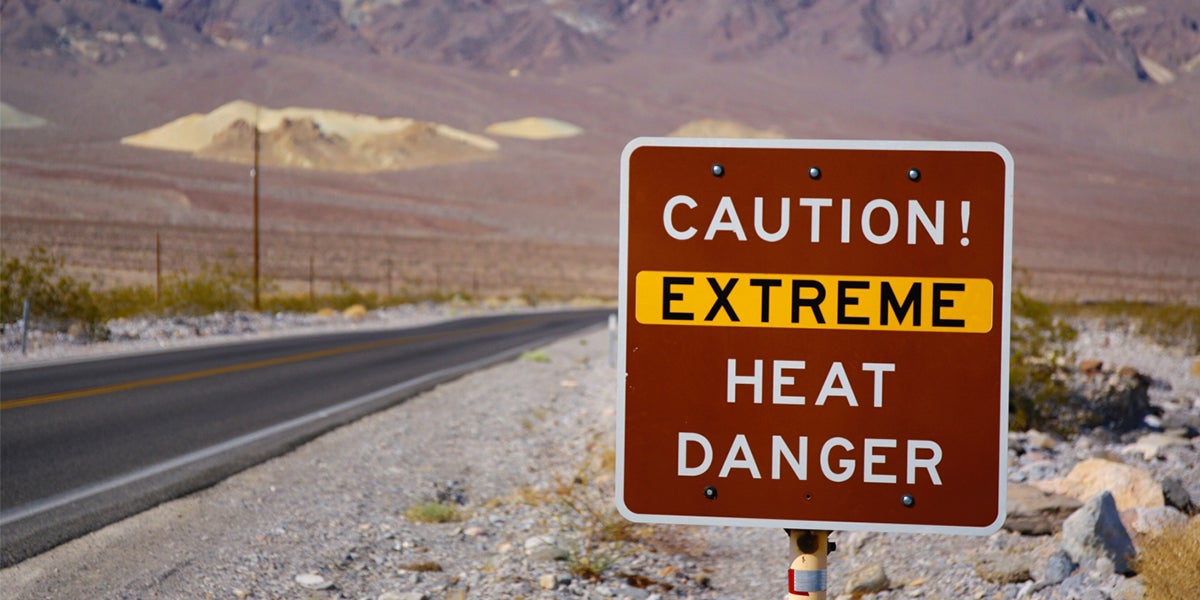 Up to three quarters of the world’s population could be at risk from deadly heat extremes by the end of the century, a new study suggests.

The research found that just under a third of the global population is currently exposed to heat extremes that have resulted in deaths in the past. This will increase as global temperatures rise.

Keeping global warming to less than 2°C above pre-industrial levels would limit the number at risk from potentially lethal heatwaves to around half of the global population.

But, as other scientists told Carbon Brief, studies into heat-related deaths have a number of challenges to overcome before their findings can become widely applicable across both developed and developing regions.

Recent decades have seen some stark examples of how devastating heatwaves can be. For example, summer heat extremes caused more than 70,000 deaths across Europe in 2003, close to 11,000 in Moscow in 2010 (from both heat and air pollution) and around 740 in Chicago in 1995.

The new study, published Monday in Nature Climate Change, suggests that the number of people at risk from such deadly heat extremes will rise in the future.

The researchers trawled through the peer-reviewed literature for studies published between 1980 and 2014 about heat-related deaths. This turned up 911 papers that covered almost 2,000 case studies from around the world. Of these case studies, 783 focused on specific heatwave events in specific cities.

Using weather data, the researchers compared the conditions during those 783 events against those during other heatwaves in the same cities that didn’t cause deaths. On this basis, they found that the combination of average daily temperature and humidity were the best way to differentiate between lethal and non-lethal events. Co-author Dr. Iain Caldwell, from the University of Hawai’i at Mānoa, explained to Carbon Brief:

“We were able to identify a threshold in temperature and humidity, above which conditions have become lethal in the past—we call this threshold the ‘deadly threshold’ in our paper.”

You can see this in the chart below. The black crosses identify the reported temperature and humidity of lethal heat extremes, while the colored hexagons show the conditions during non-lethal heatwaves. The red line indicates the “deadly” threshold above which all events caused deaths. 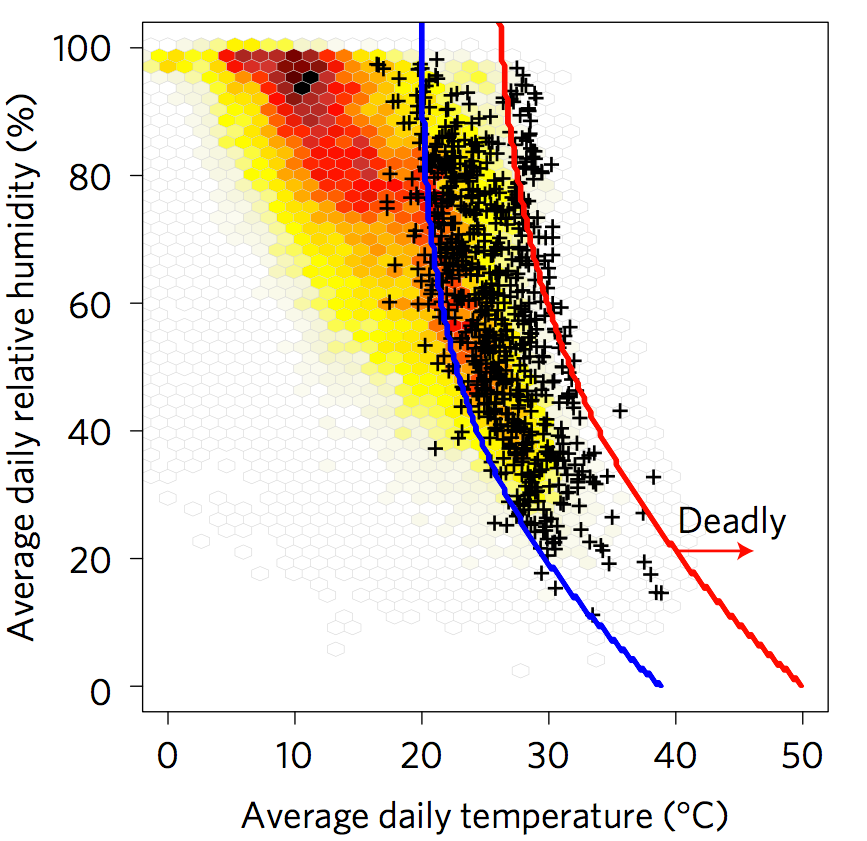 Average daily surface air temperature and relative humidity during lethal heat events (black crosses) and during non-lethal heat event of equal duration from the same cities (the red to yellow shading indicates the number of such non-lethal events).Mora et al. (2017)

This is “consistent with human thermal physiology,” the paper said. In hot and humid weather, the air is already heavily laden with water vapor, so your sweat doesn’t evaporate and your body can struggle to shed heat.

In the current climate, around 30 percent of the world’s population get 20 or more days per year above the “deadly” threshold.

This percentage is increasing as global temperatures rise, the researchers said, and will rise further through the century—depending on how successfully we cut our carbon emissions.

For example, under the RCP8.5 scenario where emissions aren’t curbed, as much as 74 percent of the global population could be exposed to at least 20 days of deadly heat extremes a year by the end of the century.

However, cutting emissions to give a good chance of staying below 2°C of global warming—known as the RCP2.6 scenario—would reduce this percentage to 48 percent. At the moment, our emissions are tracking close to RCP8.5.

The study highlights the importance of cutting emissions to minimize how many people will be put at risk, said Dr. Jeremy Pal, from Loyola Marymount University in Los Angeles. Pal wasn’t involved in the study, but co-authored a paper in 2015 about the potential for “unbearable” heat extremes in the Middle East. He told Carbon Brief:

“The study is important because it shows additional strong evidence that climate change, if unmitigated, will result in an increase [of] deadly conditions to humans.”

The researchers produced an interactive map of their results, for both the past and the future (see below). You can toggle between different decades and different emissions scenarios in the top right-hand corner. You can also watch a time lapse animation of the changing risk from 1950 to 2100 by clicking on the play icon in the bottom left-hand corner.

The shading indicates the scale of the risk of deadly heat days, from low (yellow) to high (red). Clicking on a location will give you a specific projection for the number of days above the deadly threshold.

The results suggest that tropical countries are likely to be worst affected by deadly extreme heat in the future. The findings were less conclusive for large regions of the world—shaded white—where either there wasn’t sufficient data (e.g. North Africa), or the results had high uncertainty (e.g. much of the mid-latitudes).

Despite these gaps in the results, this doesn’t mean these regions aren’t at risk. One example is Western Europe, noted Caldwell:

“Based on the fact that there have already been severe lethal heat events in Europe in the recent past, I personally believe that the risk in these areas remains high. Fortunately, researchers in Western Europe seem to be developing early warning systems that should warn people when conditions are likely to become deadly.”

As global temperatures rise, research on heatwaves and health is likely to become ever more pertinent. Yet, as scientists not involved in the study pointed out to Carbon Brief, there are some challenges that these sort of studies need to overcome.

One is that the bulk of the peer-reviewed literature on heat-related deaths refers to extreme heat in developed countries—particularly Europe and North America. You can see this in the map from the study below.

Map of locations where links between heat and mortality have been documented (red squares) and where specific heat episodes have been included in this study (blue squares).Mora et al. (2017)

By basing their threshold for deadly heat and humidity on the available literature, the study is identifying relationships about heatwave risks from predominantly mid-latitude countries and assuming they are valid in other parts of the world.

This is a poor assumption, said Dr. Dann Mitchell from the University of Bristol, who led a study last year on the deaths caused by the 2003 European summer heatwave. He told Carbon Brief:

“We know these relationships are highly city-dependent, changing due to local infrastructure, economy and lifestyle, amongst other things. Cities in Africa face very different challenges to those in Europe, and what is classed as deadly heat in one may not be the same as in another.”

So, an increase in heatwaves will impact cities in European differently from those in Africa, said Mitchell. African cities may fare better in some ways, he added, but worse in others:

The study did have some studies outside the mid-latitudes, noted Caldwell, such as in southern India and southern China. And the temperature-humidity threshold was surprisingly consistent across different latitudes, he added:

“Of course, it would be more ideal to have incorporated data for more tropical areas but we had trouble finding such data. Hopefully this will prompt others to remedy this by collecting more data for those regions.”

A second challenge is that the risks posed to health by heatwaves depend on socio-economic factors as well as the climate, said Professor Kristie Ebi of the department of global health at the University of Washington. These include, for example, the extent that people are exposed to heat extremes, how vulnerable they are, and whether they are able to prepare and manage for heatwaves.

In fact, there is evidence that in some parts of the world people are already adapting to worsening heat extremes, said Ebi:

“There is growing literature that sensitivity to heatwaves has declined over recent decades, presumably because of some degree of acclimatization to ever higher temperatures, increasing access to air conditioning and cooling centers, better understanding and communication of the risks of high ambient temperatures, and changing infrastructure to reduce urban heat islands.”

Including projections of recent and future changes in exposure and vulnerability would have been a helpful addition to the new study, Ebi added.