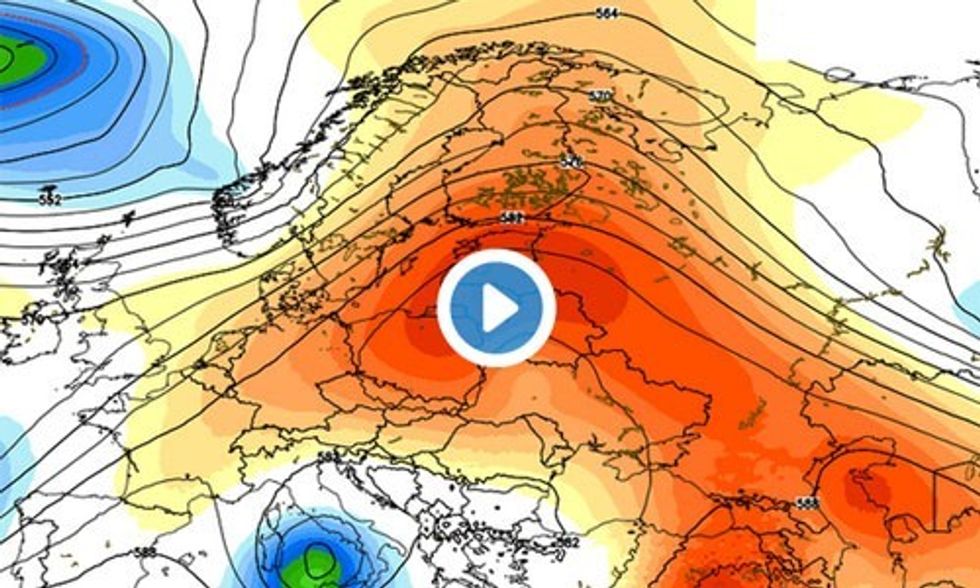 This summer is undoubtedly one for the record books. Brutal heat has literally melted roads, ignited forest fires and affected millions around the planet. Extreme weather has scorched the Middle East, Asia, Europe and the U.S, as weather experts predict that this year will surpass last year as the hottest in recorded history.

A massive heat dome continues to break so many records across Europe and the Middle East http://t.co/SFu4AlGjjM pic.twitter.com/NyGmNflXug

“I’d not be surprised if 2015 ends up the warmest year on record,” said National Oceanic and Atmospheric Administration (NOAA) climate monitoring chief Derek Arndt in June.

Death tolls are currently climbing in Egypt as temperatures soar to 114 degrees Fahrenheit. The Associated Press reported that more than 60 people—mostly elderly—have died from the heat and high humidity. An additional 581 people have been hospitalized for heat exhaustion.

The entire region has been devastated by the relentless heat. Earlier this week, Iran hit a sweltering 164 degrees—just a few degrees shy of the highest ever record heat index. Pakistan's devastating heat wave in June killed 1,233 and hospitalized more than 1,900 due to dehydration, heat stroke and other heat-related illnesses. In neighboring India, 2,500 people succumbed to heat a month earlier.

Japan is experiencing heat-related deaths in 29 out of its 47 prefectures, with Tokyo currently experiencing an "unprecedented" streak of temperatures over 95 degrees, according to Weather.com. The week of July 27 through Aug. 2—where 25 people died from heat stroke and other heat-related illnesses—was considered the "deadliest" week in the country and nearly equaled the death toll of 30 in the preceding three months combined, Weather.com added in its report.

Elsewhere in Asia, Chinese weather authorities have issued heat wave alerts as some parts of the country experienced temperatures in the triple digits. The Guardian also reported in July that North Koreans were ordered to start work at 5 a.m. in order to cope with temperatures around 104 degrees Fahrenheit in Pyongyang.

The heat has smashed records across the continent, reminding some of the devastating summer of 2003 that claimed 30,000 lives. "Europeans have been painfully aware of the dangers of extreme heat since the killer heat wave of July 2003," said Weather.com senior meteorologist Nick Wiltgen.

"This July 2015 was the warmest July on record for Spain, Italy, Switzerland and Austria," Dr. Jeff Masters, Weather Underground's director of meteorology, told the website.

Eastern Europe is also seeing temperatures up to the mid-90s, when highs around 75 are more common this time of year, AccuWeather wrote. And Poland is also experiencing the mass extinction of one very unsuspecting victim: IKEA meatballs.

Record-breaking heat in Europe has forced Ikea in Poland to take meatballs off the menu. http://t.co/5Til53XFDS pic.twitter.com/EXrB2u9cWb

Although summer is coming to an end, many parts of the U.S. will still be baking in the sun's rays. Some Los Angelenos, for instance, will feel temperatures in the 100s this week, the Los Angeles Times reported. Stuart Seto, a weather specialist with the National Weather Service, told the publication on Monday that while the city's temperatures are not record-breaking, they are still about 10 degrees above average for this time of year.

The American summer of 2015 has also been marked by destructive wildfires that have burned through the West. So far, flames have burned nearly 5 million acres (an area the size of Connecticut) in the state of Alaska. Climate Central even created an interactive map that shows in real time the active wildfires in the U.S.

Global warming has been suggest as one of the possible culprits of this extreme heat.

“The heat wave is still ongoing and it is premature to say whether it can be attributed to climate change or whether it is due to naturally occurring climate variability,” stated Omar Baddour, who coordinates the World Meteorological Organization’s World Climate Data and Monitoring Program.

“But climate change scenarios predict that heat waves will become more intense, more frequent and longer. It is notable that the time between major heat waves (2003, 2010 and 2015) is getting shorter," he added.