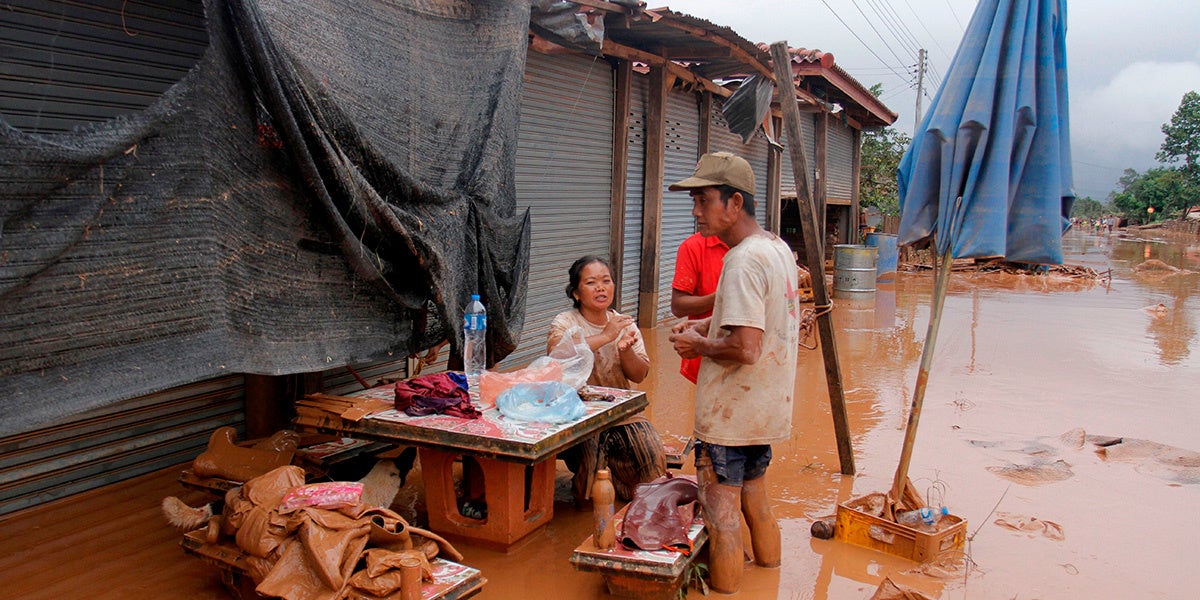 The dam had been under construction since 2013, according to CNN, and is part of a larger plan to earn money for Laos by selling hydroelectric power to its neighbors.

“This break shows the major risks from dams being built, and dam designs that are unable to cope with extreme weather events, such as very heavy rains that we’ve seen in the last few days,” International Rivers Laotian dams expert Maureen Harris told Al Jazeera.

The dam collapse, which came without warning, impacted up to 11,777 people and displaced as many as 6,000, the Office of the UN Resident Coordinator in Laos reported, according to CNN.

Authorities have not released information on the extent of the damage, when waters are expected to recede or the cause of the collapse.

Project shareholder Ratchaburi Electricity Generating Holding Public Company Limited, which has pledged $40,000 to relief efforts, blamed the breach on the “continuous rainstorm which caused high volume of water to flow into the Project’s reservoir,” according to CNN.

Climate change is expected to increase rainfall by 50 percent in much of Asia, and the rain that falls is projected to be more intense, The Third Pole reported.

This is a problem for the future safety of hydroelectric development along the Mekong River Delta, which, as this incident shows, already poses grave risks.

“Communities were not given sufficient advanced warning to ensure their safety and that of their families. This event raises major questions about dam standards and dam safety in Laos, including their appropriateness to deal with weather conditions and risks,” International Rivers said in a statement reported by CNN.

Concerns have also been raised about the impact of dams on the river’s important fisheries.

“The Mekong Basin’s fisheries are a vital resource, providing food security and livelihoods for millions of people, many of whom have limited opportunities to increase their food production or income,” a report published by the Mekong River Commission in December 2017 and reported by CNN said.

The collapsed dam was projected to cost $1.2 billion, have a capacity of 410 megawatts and begin operations in 2019. It was to sell 90 percent of its electricity to Thailand and the rest to the local grid, according to Al Jazeera.