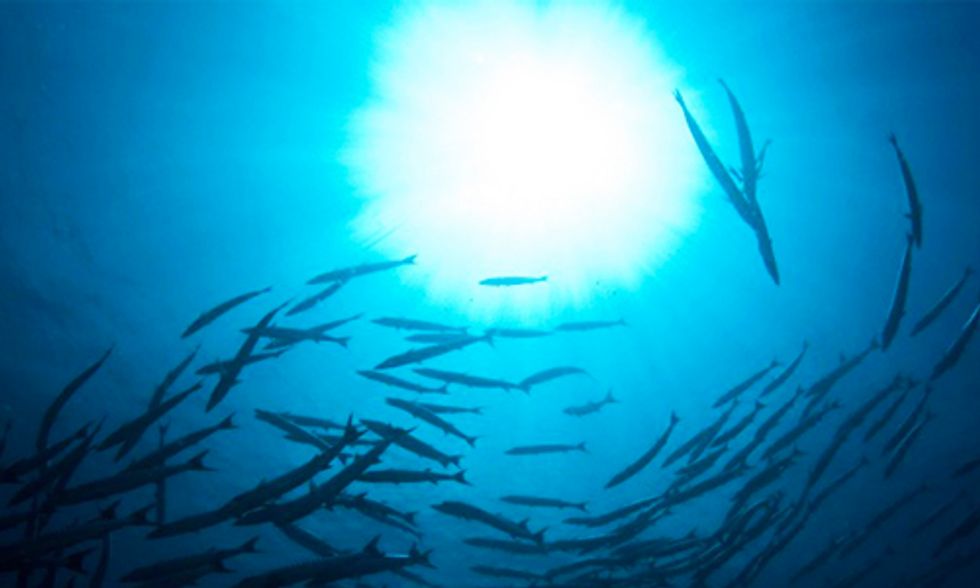 Scientists in the U.S. have identified a new hazard in a world in which the climates change and the oceans warm: measurable stretches of the seas could become sapped of oxygen.

They say that parts of the southern Indian Ocean, the eastern tropical Pacific and the Atlantic are already less oxygen-rich because of global warming. And oxygen deprivation could become increasingly widespread across large regions of ocean between 2030 and 2040.

Extremes of heat deprive fish of the oxygen they need to survive near the ocean surface. Photo credit: Naren Gunasekera / Flickr

Anyone who has ever kept a home aquarium knows that, in the summer, the fish in the tank are more likely to be seen gasping nearer the surface. That is because the colder the water, the greater its capacity for dissolved oxygen.

Growing concentrations in the atmosphere of the greenhouse gas carbon dioxide have begun to change the ocean chemistry, making sea water gradually and alarmingly more acidic and less hospitable to many of the species adapted to ocean life.

Now Matthew Long, an oceanographer at the U.S. National Centre for Atmospheric Research in Boulder, Colorado and colleagues report in Global Biogeochemical Cycles journal that they repeatedly modeled changes in the ocean’s oxygen content over the years 1920 to 2100.

Oxygen from the atmosphere gets into the sea only when it dissolves directly or is released by photosynthesizing marine plants and phytoplankton. The warmer the water, the harder life is for the creatures nearer the surface.

To make things more difficult, warmer waters are less dense, making them less likely to sink and bring the colder, more oxygen-rich waters to the surface. In unusually hot weather, “dead zones” appear in the seas, where fish and shellfish cannot survive.

The researchers warn that there will be more of these as global temperatures continue to rise. “Loss of oxygen in the ocean is one of the serious side-effects of a warming atmosphere and a major threat to marine life,” Dr. Long said.

“Since oxygen concentrations in the ocean naturally vary, depending on variations in winds and temperature at the surface, it’s been challenging to attribute any deoxygenation to climate change. This new study tells us when we can expect the impact from climate change to overwhelm the natural variability.”

The new map suggests that even by 2100, some waters—off the east coasts of Africa and Australia and Southeast Asia and parts of the South Atlantic, for instance—will remain oxygen-rich. But oxygen loss due to climate change will become detectable much more swiftly in northern waters in the Pacific and parts of the Atlantic.

There are uncertainties. Oxygen measurements in the world’s oceans—and 70 percent of the planet is covered by blue water—are relatively sparse.

“We need comprehensive and sustained observations of what’s going on in the oceans to compare with what we’re learning from our models and to understand the full impact of a changing climate,” Dr. Long said.