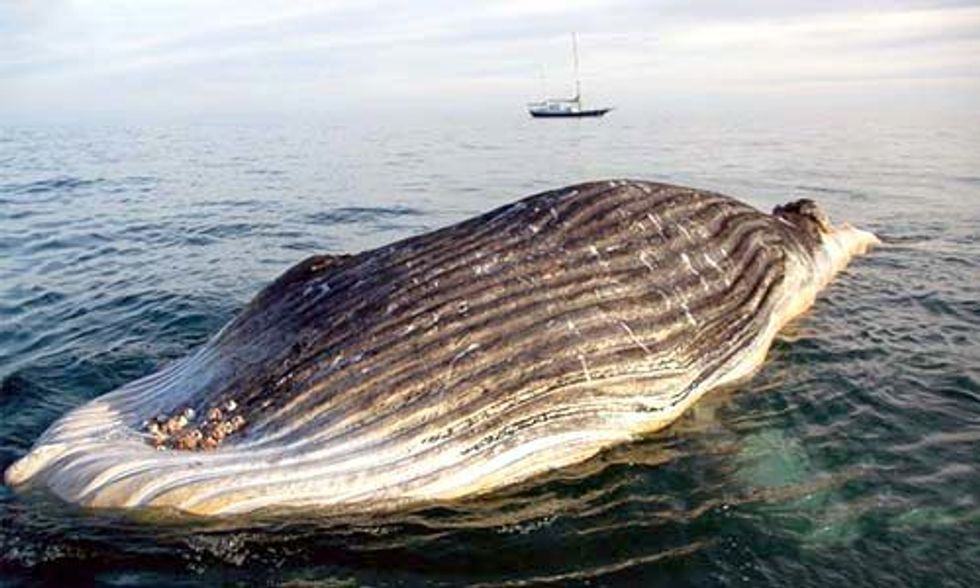 At dusk on Christmas Eve, crew onboard the Sea Shepherd vessel R/VMartin Sheen spotted a dead humpback calf entangled in an illegal gillnet inside the vaquita refuge in the northernmost tip of Mexico's Gulf of California. A two-year ban on the use of gillnets was issued by Mexican President Enrique Peña Nieto earlier this year in an effort to protect the vaquita, one of the most endangered marine mammals in the world.

After spotting the whale from a distance, the crew upon closer inspection discovered that the calf's right flipper was entangled by the gillnet. The gillnet anchored the whale down to the bottom of the sea. The tail flukes were also injured and entangled with other fishing lines. The crew of the R/V Martin Sheen alerted the government authorities with the whale’s coordinates so they could remove the net and fishing debris from the area before it kills other marine life.

The R/V Martin Sheen’s international crew is currently engaged in Operation Milagro II, working with the Mexican authorities to enforce the two-year moratorium on the use of gillnets and to protect the vaquita's habitat. Vaquita are often accidentally caught in gillnets set to catch the totoaba, another endangered species native only to the northernmost part of the Gulf of California. The totoaba’s swim bladder is smuggled from Mexico and sold on the black market in China where it is used for a soup believed to have medicinal properties. The gillnets used to poach totoaba often trap the vaquita, entangling them and causing them to drown.

"It was a very sad sight to spot this dead humpback calf inside the vaquita's refuge. It proves that there is still totoaba poaching happening. There are less than 97 vaquitas surviving; any one of them could become caught in these deadly gillnets," Bastien Boudoire, first officer onboard the R/V Martin Sheen, said.

Currently, the Sea Shepherd crew is not authorized to remove the gill nets. Sea Shepherd has requested the authority from the Government of Mexico to remove gillnets in order to more effectively assist the Mexican Navy in protecting the vaquita’s habitat.

"We recognize and commend the efforts of the Mexican Navy," Oona Layolle, captain of the R/V Martin Sheen and campaign leader of Operation Milagro II, said. They are doing an outstanding job in the vaquita's refuge—extensively patrolling the area and enforcing the law here. We would like to help even further by being able to remove these nets that are a constant danger to the few surviving vaquitas. Losing even one vaquita at this point is a disaster as this species is on the brink of extinction right before our very own eyes."

By authorizing the Sea Shepherd crew to remove gill nets and other fishing line, Sea Shepherd can more effectively protect the vaquita and all marine wildlife in the Gulf of California. In the next few weeks, the R/V Martin Sheen will be joined by Sea Shepherd’s new fast patrol ship, the M/V Farley Mowat. This former U.S. Coast Guard Cutter will substantially increase Sea Shepherd’s effectiveness in patrolling the vaquita refuge and stopping the illegal use of gillnets.

Why Do We Kill 100 Million Sharks Each Year?