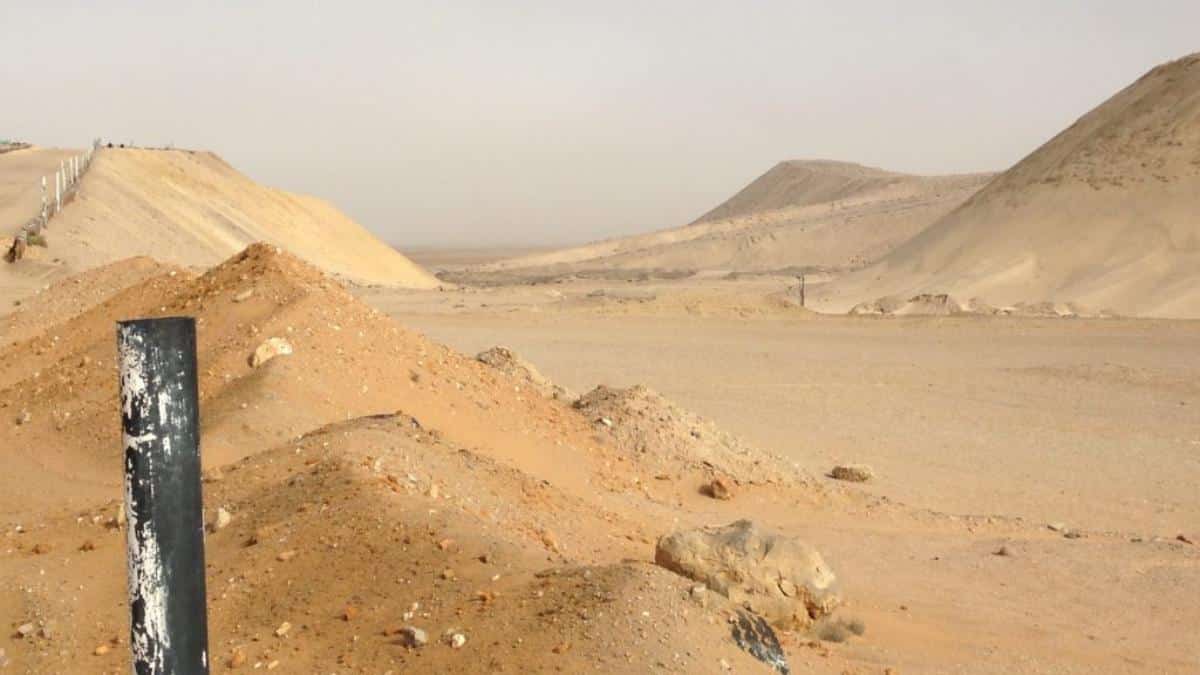 In early 2021, De Beers — the world’s biggest diamond company — achieved something of a public relations coup when it announced two new prestige jewelry lines intended to position the notoriously polluting corporation as environmentally friendly and responsible.

The first, the high-end “Reflections of Nature” jewelry line, supposedly celebrates the natural landscapes from which the corporation unearths its diamonds. It includes five unique sets and a total of 39 “exclusive” pieces that, according to De Beers, are meant to honor and “immortalize the glorious triumph… [and] raw beauty of nature untouched by man.”

De Beers also announced its “ReSet Forever Love” collection, a collaboration with three young designers on pieces that “celebrate love and sustainability.” According a recent article in Harper’s Bazaar, De Beers stresses that the diamonds included in this collection’s intricately shaped rings, necklaces and brooch were “sourced sustainably to ensure it has a lasting positive impact for people and the planet.” By “it,” one can assume the company means the jewelry itself, though this seems grandiose and makes no sense.

Harper’s Bazaar isn’t the only publication to fall under the spell of De Beers’ spin doctors. The Robb Report was also quite taken with the “Reflections of Nature” line and De Beers’ campaign to place “the source of its most magnificent gems front and center.” The Report further amplified the claim made by De Beers Jewelers CEO Céline Assimon, who said, “With this collection, we wanted to take everyone on a journey and escape to these locations that reside in the countries close to De Beers’ heart.” British Vogue has been seduced onto the bandwagon as well, gushing, “No one shows off the variety and natural beauty of rough coloured diamonds quite like De Beers.”

These pieces — rings and necklaces designed to reflect the dramatic hues and curves of the Namibian sand dunes, or diamonds cut to evoke a coral reef and its fish — range from ,000 to 1,000 and are unlikely to save Earth, mitigate climate change or have much of a “lasting positive impact” on humanity.

But such greenwashing rhetoric, when mapped over and onto the actual environmental consequences of diamond mining, does indeed emphasize the impact and audacity of De Beers’ PR machine.

This is just the latest example of claims laid out in what De Beers calls its “Building Forever” reports, wherein the conglomerate — in a forced nod to increasing public concern over sustainability and environmental ethics — purports to address the “environmental impact” of its diamond-mining business. According to Dr. Patti Wickens, De Beers’ senior environmental manager, the reports are “driven by our commitment to have a net positive impact on biodiversity.” But these reports are often scrutinized only by the company’s own stakeholders, not outside authorities who can verify the information presented.

The reality is that the landscapes De Beers claims it wants to “immortalize” via the “Reflections” line and “sustain” via the “Forever Love” line have been so thoroughly ravaged they’ve resisted nearly all efforts at rehabilitation.

I spent the better part of 2016 on South Africa’s Diamond Coast — one of the landscapes the corporation wishes to “honor” with its new collection — conducting research for my book, Flight of the Diamond Smugglers. There I interviewed Johann MacDonald, manager of the De Beers Namaqualand Diamond Mine, who had a slightly more nuanced view of the company’s environmental concerns.

“It’s a bit of a challenge to wring life out of this at this point,” he told me, gesturing to the mine property, a landscape so arid and fallow it appeared more Martian than earthly.

The soil of South Africa’s Diamond Coast has suffered since De Beers took it over in 1925, and the Namaqualand mine is no exception. De Beers had recently deemed this 79,000-acre expanse of land to be “over-mined,” and MacDonald was responsible for slowly laying off the workforce and shutting down the mine (and, to some degree by extension, the entire town it once supported), and attempting to rehabilitate the desert soil after the decades of corporate pillaging.

Despite these claims, the soils around the mines have suffered for the better part of a century.

In Namaqualand the corporation’s Environmental Division has attempted to restore portions of the land via an agenda of phytoremediation.

Phytoremediation is the process by which a variety of plants are carefully sewn into a ravaged and contaminated soil in the hopes of eradicating said contaminants and restoring the soil to a “pure” and healthy state, capable of once again supporting the growth and subsequent thriving of endemic flora and fauna. If this rhizosphere biodegradation proves successful, then the plants will release nutrients into the soil via their root systems, essentially “defibrillating” the naturally occurring microorganisms therein and compelling the contaminants to degrade. In the successful application of phyto-stabilization, on the other hand, the plants yield specific chemical compounds that — rather than destroy the contaminants in the soil — entrap and paralyze them. In this way the toxins are still present in the soil but are — so to speak — cryogenically frozen within it.

Various other sub-processes of phytoremediation are employed if these two methods fail to clean the soil — from phyto-accumulation (wherein the plants actually absorb, sponge-like, the soil’s impurities), to phyto-volatilization (where the plants suck up contaminated groundwater, “clean” that water, and then discharge the contaminants into the air through their leaves), to phyto-degradation (where the plants take in the soil’s toxins and metabolize them within their tissues, therefore destroying them).

De Beers brags about its efforts, but none of these processes have restored the land.

A Bleak Landscape, a Bleaker Community

The De Beers Namaqualand mine, in fact, is the antithesis of a “pure” landscape. A description of the place demands prefixes — other, extra, pre and post: otherworldly, extraplanetary, prehistoric, post-apocalyptic. It is nothing more than beige barrenness, littered with holes, chemicals, explosives and decomposing machine parts. 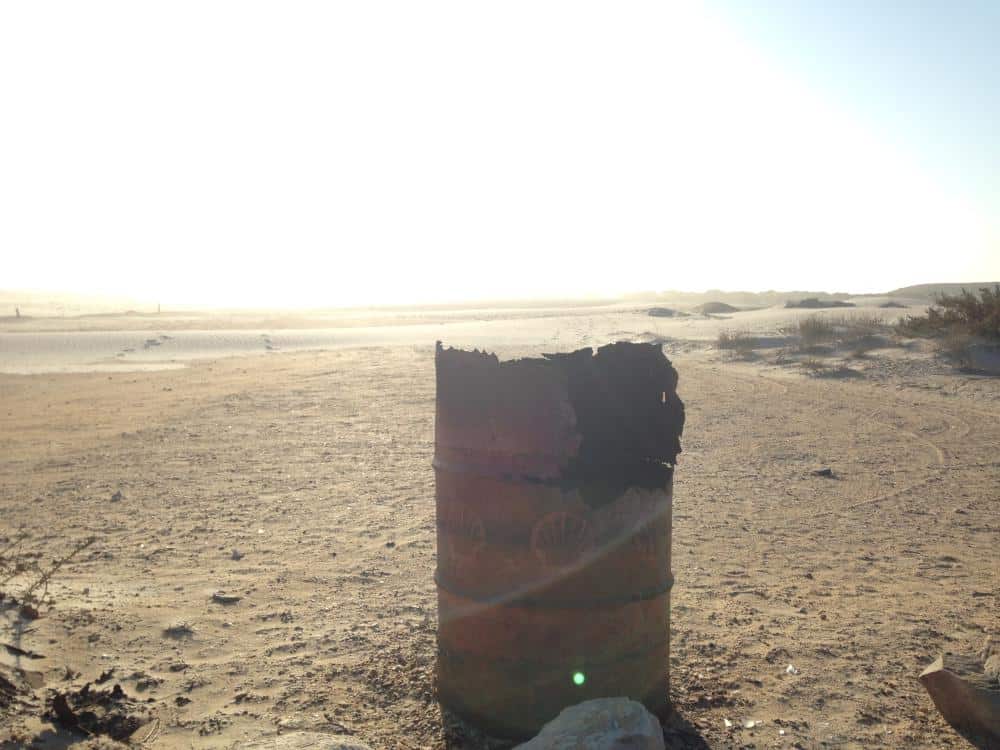 The people who live in this region have also suffered. Beginning slowly in 2007, and accelerating in 2009, De Beers downscaled its interests along the Diamond Coast, compelling an already-exploited labor force into an exodus to other parts of South Africa, onto the couches of distant family members and friends, and into other possible occupations. The company did nothing to help these people find future housing or alternative work. Many once-thriving municipalities became ghost towns.

For those who remain, survivalist proposals hang over the towns. One suggests turning the pit mines into hazardous-waste dumps; another calls for converting the migrant worker dorm into a prison.

Terms like love and forever and sustainability, especially when applied to luxury jewelry lines, ring hollow to those whose land this once was, later indentured to the machine of corporate colonialism. It’s like an oil company claiming innocence of the environmental consequences of drilling into the seafloor by building a gas tank in the shape of a coral bed.

On the Diamond Coast, the Indigenous Khoisan populations told me they wish to try to once again farm using traditional methods. They’re busy fighting — likely in vain — De Beers’ efforts.

De Beers perpetuates the propaganda that the desert here has ultimately suffered not from mining, but from the grazing of the Indigenous population’s farm animals.

The corporation maintains ownership of the mineral rights here, and as such, controls the land and how it’s used. It has, in fact, gone so far as to compel local lawmakers to issue a ban on farming in the area. It doesn’t want anyone else making money off this land while it’s busy making claims about “restoration” and patting itself on the back.

Having successfully blocked Indigenous people from farming here, the corporation, after extracting its diamonds, appears to want to use the land as a private garden — a little spot to play in with their bulldozers, compost cocktails, cardboard “grow” circles, shovels and pails.

Restoration and conservation seem to be fallacies here, mirages of corporate disinformation. To what level does De Beers want to restore this land, and why, after all these decades of plunder, should it be the company’s to manage in any case? Even if the stab at rehabilitation did work, and even if the company’s Environmental Division could make something verdant out of this havoc, wouldn’t that also be insufficient? Wouldn’t it be a case of environmental restoration as concealment of decades of gleeful corporate atrocity?

Even Namaqualand mine manger Johann MacDonald got frustrated beholding a plot of barren soil. He scooped up a fistful of sand and tossed it into the wind.

“This attempt to replant is a complete failure!” he told me. “The big challenge is to get things to grow. Some of these dumps have been reshaped and replanted for ten years, twenty years, and still nothing grows.” 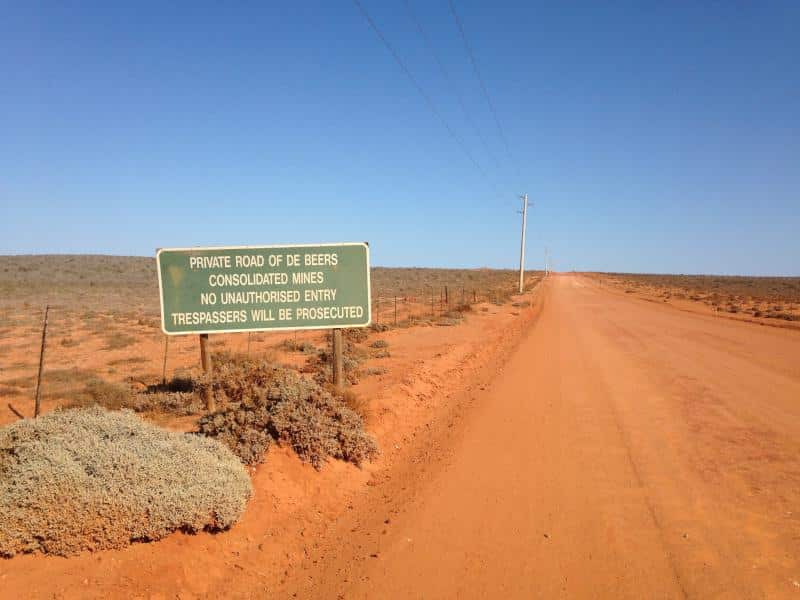 Still, the PR machine chugs on, and this year gullible publications lauded the company for its supposed environmentally minded efforts, willingness to work with up-and-coming designers, and “fancy shapes and fancy colors.”

But in 2021, if you want to behold the once “lush” landscapes of the diamond-bearing lands that De Beers claims to honor and sustain via its two new collections, the closest you’ll be able to come is an image of a 0,000 brooch.

Which is all that’s left. No sunny rhetoric can change that.