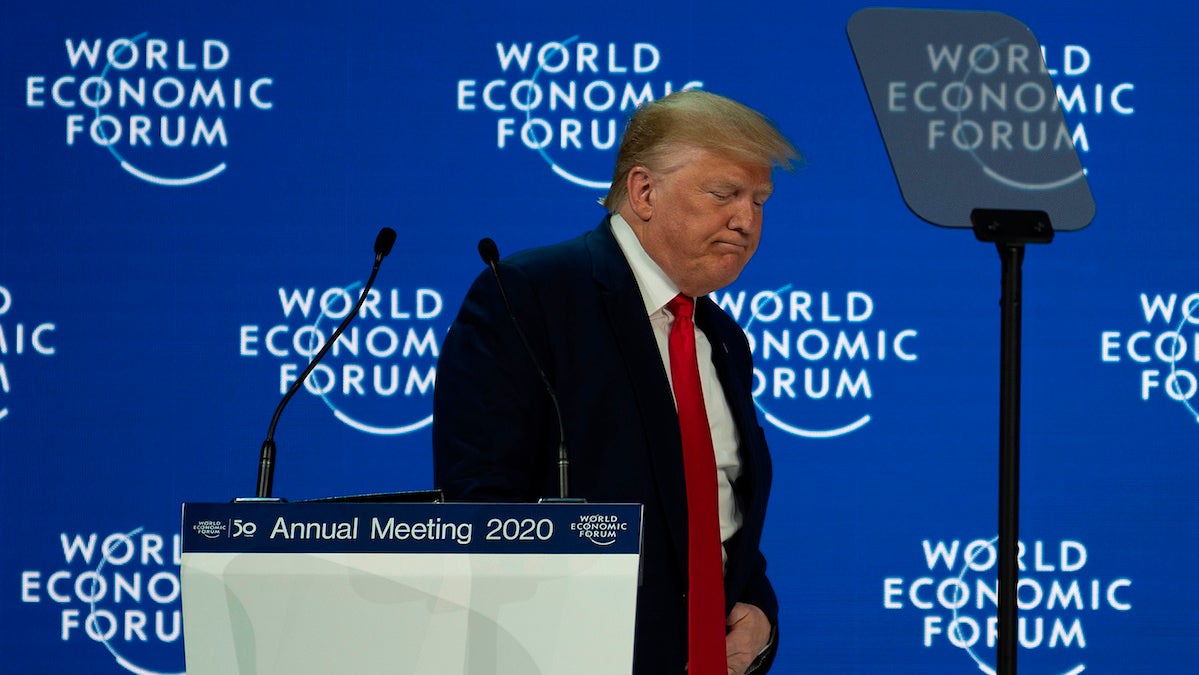 Trump leaves after delivering a speech at the Congress Centre during the World Economic Forum annual meeting in Davos on Jan. 21, 2020. JIM WATSON / AFP via Getty Images

U.S. President Donald Trump dismissed the concerns of environmental activists as “pessimism” in a speech to political and business leaders at the start of the World Economic Forum (WEF) in Davos on Tuesday.

Climate change and global warming are topping the agenda at this year’s annual meeting in the Swiss ski resort of Davos, with activists at odds with businesses and governments about how to tackle the issue.

Greta: ‘Basically Nothing Has Been Done’

“Unlike you, my generation will not give up without a fight. The facts are clear but they are still too uncomfortable for you to address,” she told a panel.

“Our house is still on fire. Your inaction is fueling the flames by the hour. And we are telling you to act as if you loved your children above all else,” Thunberg said, echoing her remarks from her WEF appearance last year.

At a panel just before Trump arrived, Thunberg emphasized that moderate changes will not be enough to slow the impact of climate change.

“We are all fighting for the environment and climate. If you see it from a bigger perspective, basically nothing has been done. It will require much more than this. This is just the very beginning,” she said.

Who else will be there? More than 50 heads of state and government will be in attendance along with more than 3,000 other attendees. German Chancellor Angela Merkel is due to speak on Thursday. Following in Thunberg’s footsteps, other young activists are also taking part this year, including South African climate activist Ayakha Melithafa and Irish teen scientist Fionn Ferreira.

What to look out for: It will be the first time that Trump meets with the new European Commission President Ursula von der Leyen. The U.S. leader has repeatedly clashed with the EU over trade and tax policies. It also remains to be seen whether businesses will back up their pledges on climate change with concrete action.

What is Davos? It’s the 50th meeting of the World Economic Forum this year, which was launched by German economist Klaus Schwab. The meeting takes place at the Swiss ski resort of Davos, drawing world leaders, business executives, academics, charity heads and celebrities. The conference is used to hold bilateral meetings, make business deals or to try and impact the global agenda. The meeting this year runs from Jan. 21 – 24.