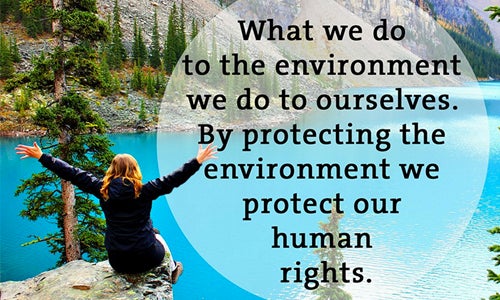 Earth’s oceans, lakes, rivers and streams are its circulatory system, providing life’s essentials for people, animals and ecosystems. Canada has one-fifth of the world’s freshwater, a quarter of its remaining wetlands and its longest coastline. With this abundance, it’s easy to take water for granted. Many of our daily rituals require its life-giving force. Yet do we recognize our good fortune in having clean, safe water at the turn of a tap?

Not everyone in Canada is so lucky. On any given day, more than 1,000 boil-water advisories are in place across the country. Imagine having to walk to your local church every morning to fill plastic jugs with clean drinking water for your family. Or having to drive to your town’s fire station or community center to collect bottled water. Imagine having to boil water for everything you do at home—cooking, cleaning, washing. This is the sad reality for people who live in communities with boil-water advisories, some for decades at a time.

Sign on to tell Canada to protect our human rights by strengthening environmental protection https://t.co/52ZFBLdcqw pic.twitter.com/33PnlUsQwp

Water problems are dangerous. In May 2000, bacteria in Walkerton, Ontario’s water supply caused seven deaths and more than 2,300 illnesses. A public inquiry blamed the crisis on flaws in the province’s approval and inspection programs, a “lack of training and expertise” among water-supply operators and government budget cuts.

In 2001, nearly half of North Battleford, Saskatchewan’s 14,000 residents became ill from contaminated water. An inquiry concluded provincial oversight was inadequate and ineffective.

How can this continue in a water-rich country like Canada?

Canada recognized the right to water at the United Nations Conference on Sustainable Development in 2012. Yet our government has failed to live up to its commitment. As a 2015 UN report points out, “The global water crisis is one of governance, much more than of resource availability and this is where the bulk of the action is required in order to achieve a water secure world.”

We are the only G8 country and one of just two Organisation for Economic Co-operation and Development countries, without legally enforceable national drinking-water-quality standards. Federal water policy is more than 25 years old and in dire need of revision. We have no national strategy to address urgent water issues and no federal leadership to conserve and protect water. Instead, we rely on a patchwork of provincial water policies, some enshrined in law and some not. Meanwhile, highly intensive industrial activities, agribusiness and pollution are putting water supplies at risk.

Canada’s environment and climate change minister has a mandate to “treat our freshwater as a precious resource that deserves protection and careful stewardship.” The government could take a big step toward accomplishing this by recognizing our right to a healthy environment, including our right to clean water.

The government should also implement legally binding national standards for drinking water quality equal to or better than the highest standards in other industrialized nations and set long-term targets and timelines to reduce water pollution. And it should fulfil our right to water by addressing the drinking water crisis in Indigenous communities and establishing a Canada Water Fund to foster the clean-water tech industry and create a robust national water quality and quantity monitoring system.

Committing to these actions would help ensure all Canadians have access to clean, safe water for generations to come. On World Water Day, help protect the people and places you love by joining the Blue Dot movement.