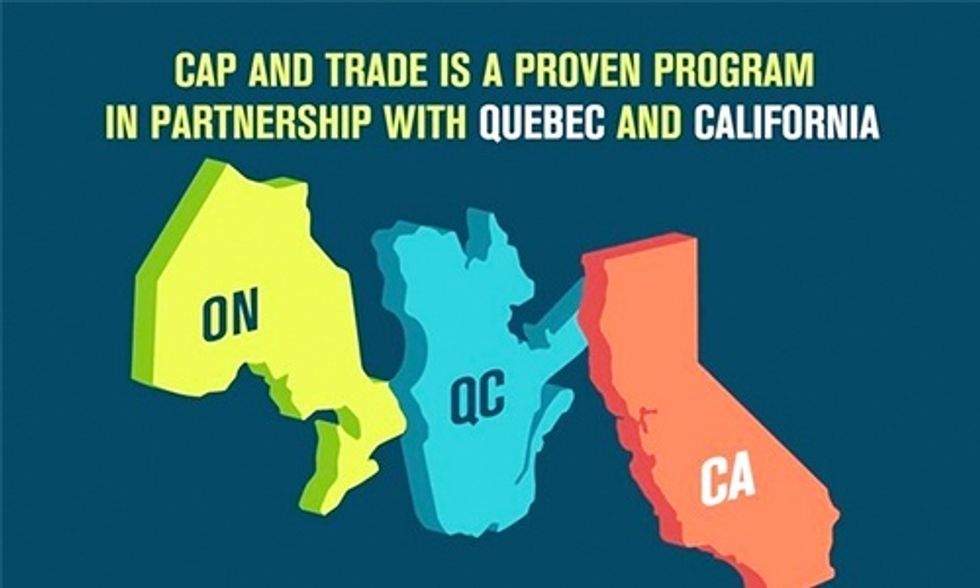 The principle that polluters should pay for the waste they create has led many experts to urge governments to put a price on carbon emissions. One method is the sometimes controversial cap-and-trade. Quebec, California and the European Union have already adopted cap-and-trade and Ontario will join Quebec and California’s system in January 2017. But is it a good way to address climate change?

The program sets an overall limit—a cap—on the amount of greenhouse gas emissions a province can emit. It then tells polluters, such as heavy industry and electricity generators, how many tons of carbon each can release. For every ton, polluters need a permit or “allowance.” So, if a company’s annual limit is 25,000 tons, it would require 25,000 allowances. If a company exceeds its limit, it can purchase additional allowances from another firm that, because of its greater efficiency, has more allowances than it needs. This is the “trade” part of the equation.

Although an individual company can exceed its greenhouse gas limit by purchasing credits, the province as a whole can’t. The overall limit is reduced every year, so if the law is followed, cap-and-trade guarantees annual emissions reductions. The declining cap is the system’s great strength and the way it protects the environment.

How effective is it? Although the answer isn’t straightforward, there’s evidence cap-and-trade played a key role in reducing acid rain in the U.S. The 1990 Clean Air Act allowed power plants to buy and sell the right to emit sulphur dioxide. Since then, U.S. sulphur dioxide concentrations have gone down by more than 75 percent. As Nobel Prize-winning economist Paul Krugman wrote in the New York Times, “Acid rain did not disappear as a problem, but it was significantly mitigated.”

Despite this and other successes, some experts are skeptical, arguing that cap-and-trade amounts to little more than a cash grab by government, a tax in everything but name. Others say it’s a mistake to expect climate change can be addressed through markets, when the problem actually requires changing our entire approach to economics, with a commitment to a steady-state economy and an end to the commodification of nature.

Some experts have also noted that the emissions reductions it brings are often modest. A 2015 paper in Canadian Public Policy claimed Quebec’s system “is still too weak to meaningfully address the environmental imperatives as outlined in the Intergovernmental Panel on Climate Change’s 2014 Fifth Assessment Synthesis Report, in which fully eliminating carbon emissions is the benchmark for long-term policy goals.” From 2013 to 2014, California’s allowance cap went from 162.8 to 159.7 megatons, a drop of less than two percent.

Ontario’s proposed legislation indicates its program will have some great strengths and a number of shortcomings. It will likely have wide coverage, applying limits on most of the province’s emissions, including those from transportation fuels. (California's system did not initially include these fuels).

Ontario is expected to reduce emissions by more than four percent a year—about twice the initial rate of California—and generate $1.9 billion annually from the plan. That money will be invested in “green” projects throughout the province with the goal of reducing carbon emissions even further.

Ontario’s proposal to give away many allowances to big emitters is less encouraging. The government says it will eventually phase out this free disbursement, but in the meantime millions of dollars in government revenue that could be used to support renewable energy and public transit will be lost.

To keep the bulk of fossil fuels in the ground—as scientific evidence says we must—we need a variety of strategies. Cap-and-trade helps reduce emissions and generates billions of dollars for other strategies to address climate change. It also embodies the polluter pays principle. But it’s not enough on its own.

The David Suzuki Foundation and others have long argued that provinces and the federal government should put a price on carbon, through carbon taxes, cap-and-trade or a combination of both. The urgent need to address global warming means provinces that have adopted cap-and-trade need to strengthen it by ensuring emissions drop faster and polluters pay a price that truly reflects the damage caused by carbon pollution.