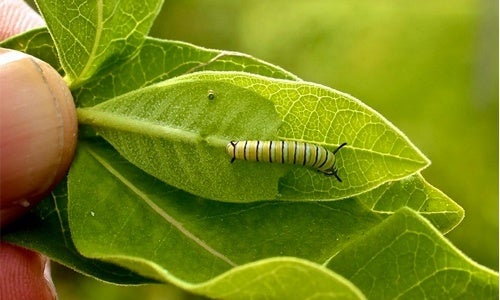 Jode Roberts has spent a lot of the summer checking out ditches and fields along the sides of roads, railways and trails. At first, he didn’t like what he was seeing. Roberts, who is leading the David Suzuki Foundation’s effort to bring monarchs back from the brink, was searching for signs that the butterflies had visited patches of milkweed plants. Despite the bleak start, he recently hit the jackpot: a half-dozen eggs and a couple of monarch caterpillars, calmly munching on milkweed leaves.

Over the past millennium, eastern monarch butterflies have migrated northward from Mexico in spring, arriving in southern Ontario, Quebec and the Maritimes in early summer, where they lay eggs on the undersides of milkweed leaves. In the following weeks, their caterpillars hatch and eat a steady milkweed diet. In late summer, they form chrysalises and undergo the amazing transformation into butterflies. They then begin fattening themselves for the arduous return to the Mexican alpine forests where they overwinter.

Concerned citizens, scientists and conservation groups were starting to think monarchs might largely be a no-show in Canada this summer. The eastern monarch population has plummeted from more than a billion butterflies in the 1990s to an estimated 35 million in 2014—a drop of more than 95 percent. They bounced back to about 55 million in Mexico this past winter, but a cool start to their journey northward coupled with the virtual eradication of milkweed plants—mainly thorough widespread use of the herbicide glyphosate (Roundup) over the past two decades—left monarch experts wondering whether the butterflies would make it across the border this year.

The good news is that citizen scientists and backyard butterfly lovers from across the northeastern U.S. and southern Canada have reported through social media that monarch butterflies are arriving and laying a remarkable number of eggs. But it’s too early to gauge whether the numbers will meet already low expectations.

While monarch enthusiasts are breathing a momentary sigh of relief, Roberts and colleagues have launched the Monarch Manifesto, encouraging people throughout the monarchs’ path to pledge to do their part to ensure the butterflies continue to recover.