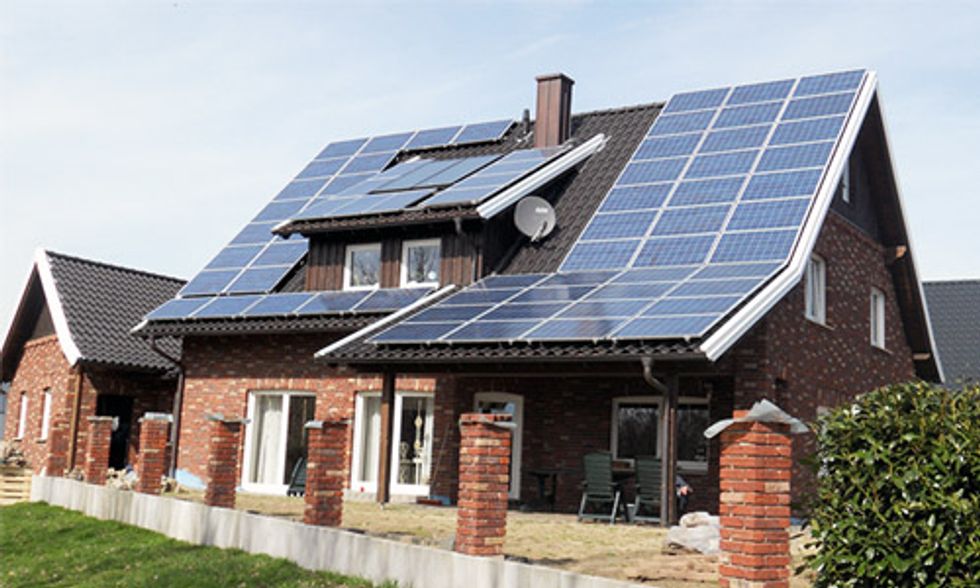 In the early 1990s, Germany launched Energiewende or "energy revolution," a program "to combat climate change, avoid nuclear risks, improve energy security and guarantee competitiveness and growth." Renewable energy grew from 4 percent in 1990 to more than 27 percent in 2014, including a significant increase in citizen-owned power projects, according to energy think tank Agora Energiewende.

Germany's greenhouse gas emissions dropped by 27 percent during that time. Its goal is to reduce emissions 40 percent from 1990 levels by 2020 and more than 80 percent by 2050. Polls show that 90 percent of Germans like the program—even though it means paying higher rates for electricity.

There's good reason for this widespread support. The primary technologies of wind and solar have become cost-competitive with conventional energy sources. Variable renewable sources and “flexibility options" for conventional and renewable power generation are making baseload power obsolete—which means the system is geared to wind and solar rather than nuclear or coal. It's one of the most reliable energy systems in the world. And it's created jobs and revenue.

Energiewende hasn't solved all of Germany's emissions and energy issues. Electricity rates are among Europe's highest, although they're expected to come down as more renewable energy becomes available and efficient usage means “actual costs to households are comparable to countries with lower prices but higher consumption levels." The country still gets more energy from coal than renewables, transportation and heating consume significant energy from conventional sources and heavy industry makes Germany one of Western Europe's highest emitters. Opposition from power utilities and coal companies, with consequent government compromises, has also slowed progress. But a range of initiatives and tools has put Germany on track to meeting its long-term climate commitments.

One tool Germany used to achieve its rapid progress was a feed-in tariff, which guarantees renewable energy producers—individuals, businesses, community organizations and power companies—access to the grid and payment from power utilities for energy they put into the system. At first, the tariff wasn't enough to cover costs, but in 2000 Germany introduced a law that guaranteed feed-in tariffs for 20 years at prices high enough for producers to profit. As renewable energy costs drop and more is brought into the system, tariffs go down.

Feed-in tariffs are in place in Ontario, and in many countries worldwide. The Pembina Institute notes they're effective for several reasons. They “reward actual production" rather than just installation, they minimize development investment risks and “facilitate access to financing" and they encourage small, medium and large producers and “community and local ownership and engagement, minimizing opposition to projects."

They also “encourage renewable power producers to use the most efficient technology, driving down costs by fostering industrial competition" and while they cause short-term electricity price hikes, those stabilize over time as costs and risks of conventional power generation and volatile fossil fuel markets are reduced. Income paid through tariffs “more than offsets any electricity price increases" for those who generate renewable energy. And if the full environmental and health damages of fossil fuels are considered, renewables are an even better bargain.

Many jurisdictions with feed-in tariffs have become leading exporters of renewable energy technology, creating local jobs and strengthening economies—with little or no government spending! Feed-in tariffs vary in rates and designs according to what types and scales of technologies governments want to encourage and where they want them located, which means they must be carefully designed.

Massive centralized power sources are not efficient and are quickly becoming outdated. Some power is lost when it has to be transmitted over long distances and large sources usually keep operating even when power isn't required. Using smart grids and distributed renewable energy with demand-management systems allows energy to be dispatched where and when it's needed, most often over shorter distances and a variety of power sources makes them more reliable, as large-scale power outages are less frequent.

Burning finite fuels in huge plants to generate electricity is no way to power the future. Meeting global commitments to reduce greenhouse gas emissions and slow global warming requires a transition from fossil fuels to renewable energy. Feed-in tariffs are an effective way for governments to encourage that shift.