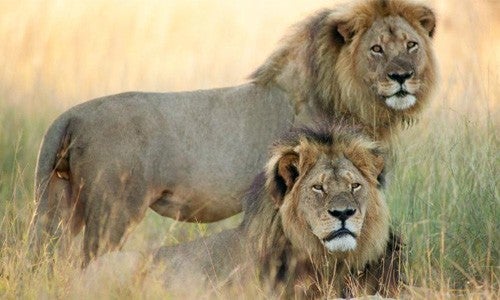 A beloved animal, tagged for tracking by researchers, crosses the invisible boundary between protected and unprotected area and is killed by a hunter who has paid tens of thousands of dollars for the “experience.” That was the fate of Zimbabwe’s Cecil the lion, whose killing sparked torrents of online and on-air outrage. But it also happens around the world every day, including in my home province of BC.

Many people are familiar with Cecil’s story. Minnesota dentist Walter Palmer and his guides, hunting at night with spotlights, are alleged to have tied a dead animal to their car near Hwange National Park to lure the lion. According to reports, Palmer wounded Cecil with an arrow, then tracked and shot the animal with a rifle 40 hours later. The lion’s body was found on the park’s outskirts, skinned and headless, along with the tracking collar.

Killing animals solely for “sport” or “trophies” is an ongoing and worldwide practice and something Palmer had engaged in many times and in many places, including Canada. He was even convicted of charges related to an illegal bear kill in 2008.

Closer to home, a grizzly that was tagged for research in Banff National Park had the misfortune to cross from Alberta, where grizzly hunting is illegal, into BC, where it isn’t and was legally shot and killed. On the BC coast, people were outraged when a photo surfaced of NHL player Clayton Stoner with a grizzly he shot in the Great Bear Rainforest. Coastal First Nations have banned trophy hunting there, but the government doesn’t recognize the ban. The bear, named Cheeky by local residents, was skinned and had his head and paws cut off, with the rest of the carcass left to rot. Reports have also surfaced that the winner of the Guide Outfitters Association of BC’s highest award in 2015 was convicted of illegal grizzly baiting in 2012.

Even though many grizzly populations are vulnerable and close to 90 percent of British Columbians, including many food hunters, oppose trophy hunting, BC’s government refuses to end the hunt, even in parks and areas where First Nations have banned the practice. Conservationists and other experts have challenged government population estimates, claiming they’re based on guesswork and that the real number is likely less than half the 15,000 on which the government justifies the hunt.

Large carnivores like lions, grizzlies and leopards that are targeted by big-game hunters are extremely vulnerable despite their size and ferocity. They range over large areas, which often puts them in conflict with humans and our infrastructure. Parks and protected areas are too small to provide adequate habitat, so bears often wander into areas where they can be killed by hunters or vehicles. They also reproduce later in life, infrequently and their young often have low survival rates, so populations don’t recover quickly when over hunted.

Large carnivores are also keystone species that play a crucial role in the food web by helping to regulate prey populations. BC grizzlies also contribute to rainforest growth by dragging salmon carcasses into the woods, where the fish remains and bear scat provide fertilizer. In BC, trophy hunters have slaughtered more than 12,000 grizzlies over the past three decades. Like Palmer, non-resident hunters here pay large amounts of money to “bag” a grizzly because the species is protected in their home country, such as the U.S., or because populations have dwindled to a handful, as in Western Europe, where the species is now protected.

Killing animals purely for the “thrill” is barbaric and wasteful and can’t be justified on economic or conservation grounds. Studies show more money can be made from people who want to view and photograph them. Research also shows very little money paid by trophy hunters benefits the local economy.

We’re at a critical moment in human history: our population, technology, consumptive demand and global economy are overwhelming the planet’s life-support systems—air, water, soil and other species. We’re in a global eco-crisis that demands a redefinition of our relationship with plants and other animals.

It’s time to end trophy hunting. In BC, the government must listen to citizens and conservationists, respect First Nations laws and customs and end the grizzly hunt.