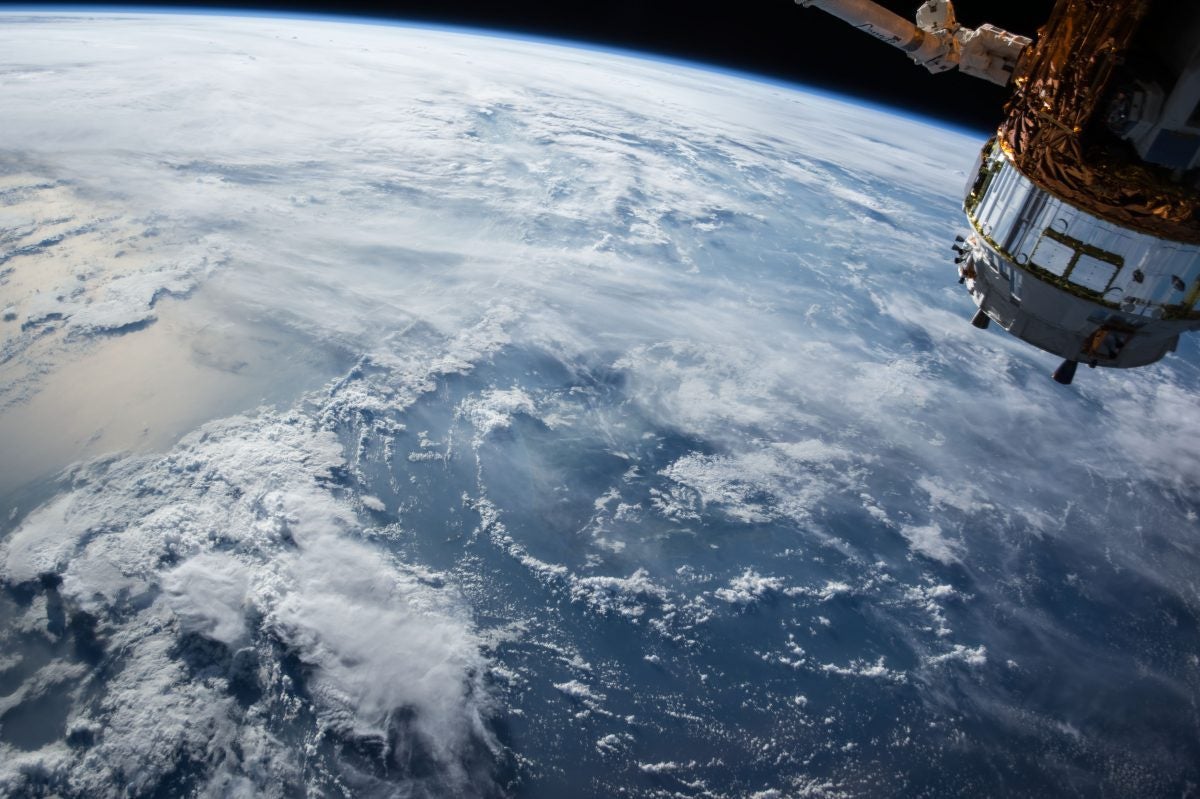 A new paper published in the Journal of Climate reveals that the lower part of the earth’s atmosphere has warmed much faster since 1979 than scientists relying on satellite data had previously thought.

Researchers from Remote Sensing Systems (RSS), based in California, have released a substantially revised version of their lower tropospheric temperature record.

After correcting for problems caused by the decaying orbit of satellites, as well as other factors, they have produced a new record showing 36 percent faster warming since 1979 and nearly 140 percent faster (e.g. 2.4 times faster) warming since 1998. This is in comparison to the previous version 3 of the lower tropospheric temperature (TLT) data published in 2009.

Climate skeptics have long claimed that satellite data shows global warming to be less pronounced than observational data collected on the earth’s surface. This new correction to the RSS data substantially undermines that argument. The new data actually shows more warming than has been observed on the surface, though still slightly less than predicted in most climate models. 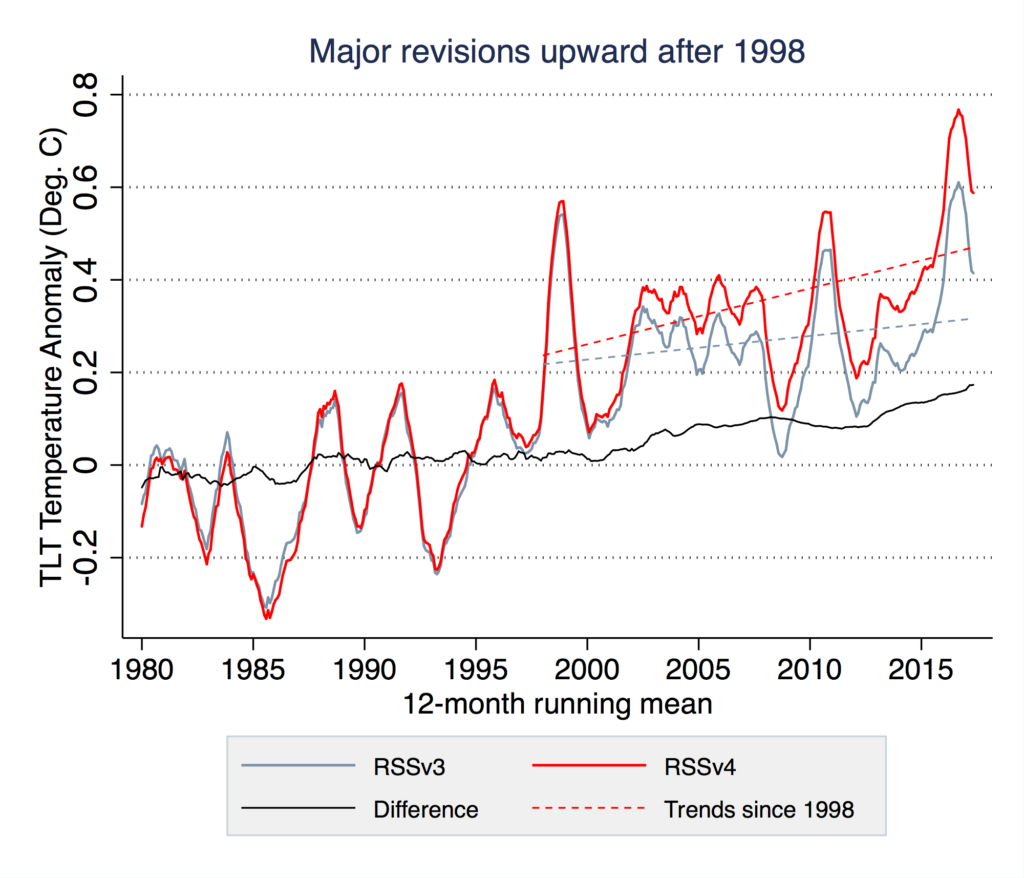 Produced by Carbon Brief using data from RSS and NASA.

Both the old record, version 3 in grey, and new record, version 4 in red, are shown in the figure above, along with the difference between the two, in black. The trends since 1998 for both are shown by dashed lines.

Most of the difference between the old and new record occurs after the year 2000. While the old record showed relatively little warming during the oft-debated post-1998 “hiatus” period, the new record shows warming continuing unabated through to present. Similarly, while the old RSS v3 record showed 2016 only barely edging out 1998 as the warmest year in the satellite record, the new v4 record shows 2016 as exceeding 1998 by a large margin. 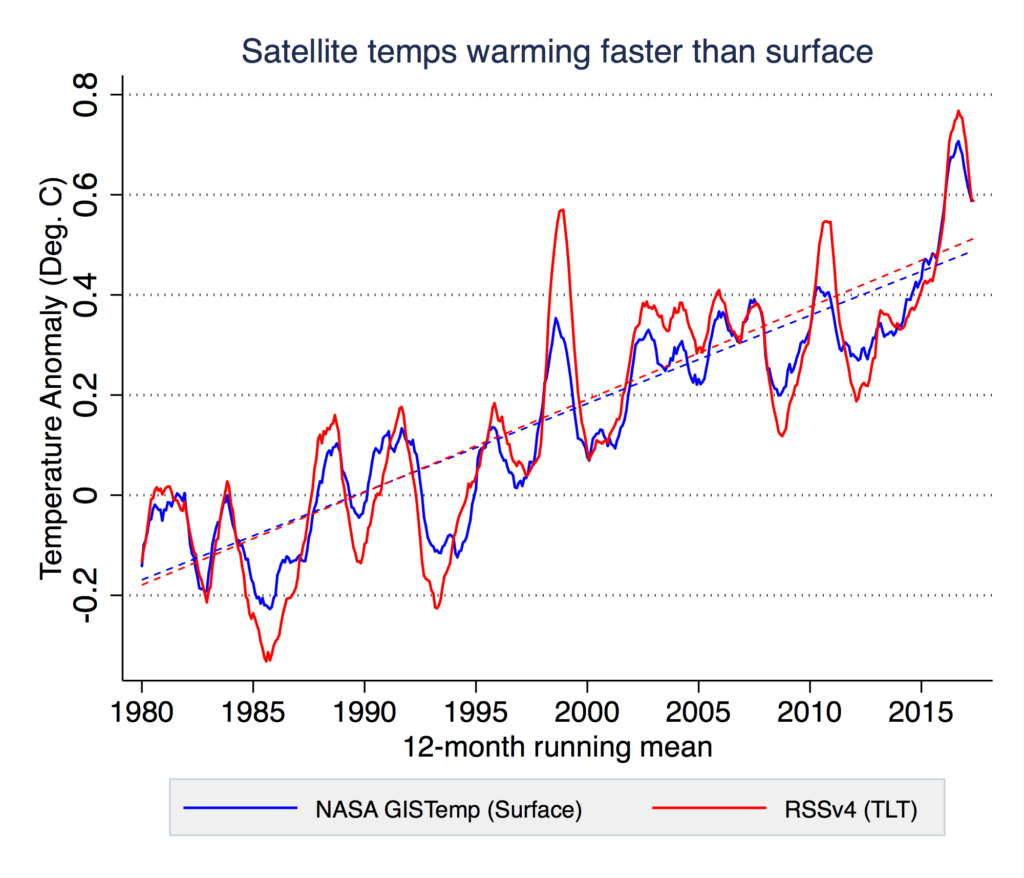 Produced by Carbon Brief using data from RSS and NASA.

The figure above shows a comparison between the new RSS record and the global surface temperature record produced by NASA. RSS v4 shows about five percent more warming than the NASA record since 1979, when satellite observations began.

Satellites have been used to measure the temperature of the earth’s atmosphere since the late 1970s. While the first global temperature records from satellites were assembled in the early 1990s, they have gone through multiple major revisions over the years, as researchers discovered and corrected various issues in the dataset caused by changing satellites, instrument types and flyover times.

A total of 15 different satellites have been used to measure atmospheric temperatures since 1979, with around two satellites actively measuring at any given time. Two different groups, RSS and the University of Alabama Huntsville (UAH) produce global TLT records that are widely used, with RSS originally developing their record in response to issues they identified in the UAH group’s work.

As these satellites circle the earth, their orbits slowly decay over time due to drag from the upper atmosphere. While the satellites are designed to fly over the same spot on the earth at the same time every day—a precondition to accurately estimating changes in temperatures over time—this orbital decay causes their flyover time to change. The figure below shows the local time that each different satellite flies over the equator and how they have changed over the lifetime of the satellite. 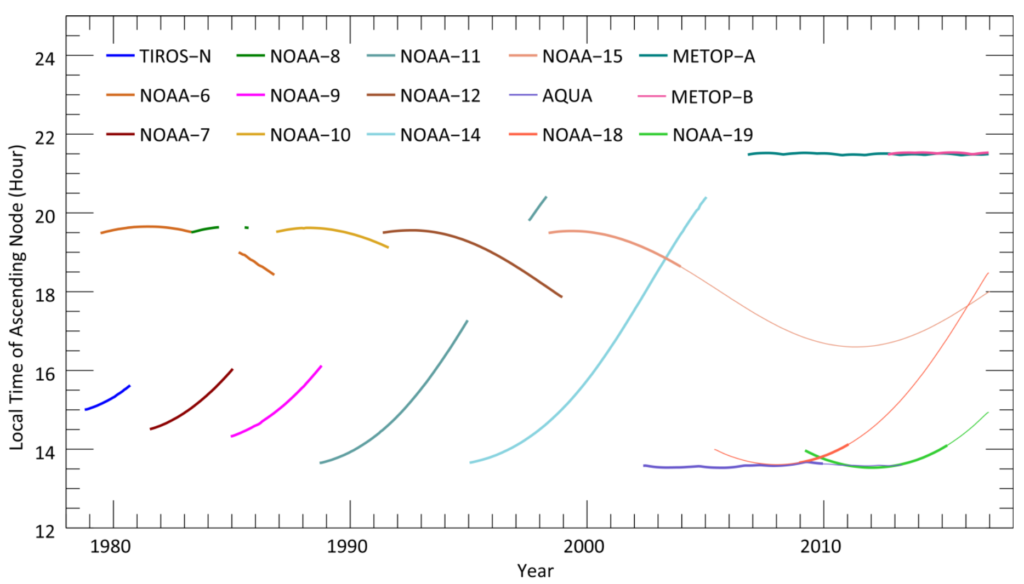 Figure 2 from Mears and Wentz 2017For more information on satellites used by climate scientists, see this 2016 infographic produced by Carbon Brief.

Some satellites have fairly large orbital drifts, going from measuring temperatures at 2 p.m. to 6 p.m. or 8 p.m. Since the temperature changes since 1979 are on the order of 0.6°C or so, it is relatively easy for bias, due to changing observation times, to swamp the underlying climate signal.

Changes in the new RSS record

To account for changes in observation times, the RSS group used a number of different approaches and models to try and estimate what the temperature would have been if the measurement time remained constant. This involves a combination of satellite observations (when different satellites captured temperatures in both morning and evening), the use of climate models to estimate how temperatures change in the atmosphere over the course of the day, and using reanalysis data that incorporates readings from surface observations, weather balloons and other instruments.

Depending on the time of the observation correction approach chosen, the resulting temperature trends between 1979 and 2016 ranged from as low as 0.13°C per decade to as high as 0.22°C per decade. The RSS group ultimately decided that the most reasonable set of parameters give a temperature trend of 0.17°C.

The RSS group also used the presence of multiple satellites in recent years to test for “odd man out” behaviors, when three or more satellites are available and one differs substantially from the others. They decided not to use NOAA-18 used prior to 2009 because of this. AQUA was also not used after 2009, and NOAA-15 was excluded after 2011. This choice increased the 1979-2016 temperature trend by around seven percent compared to leaving in satellites whose readings were identified as anomalous.

Finally, the RSS group found differences between MSU and AMSU sensor readings caused by spurious calibration drift in either NOAA-14 or NOAA-15 satellites. They tested using only MSU data or only AMSU data during the period of overlap, but decided that it was best to combine the two. Using only MSU data during the 1999-2003 overlap period would have resulted in four percent more warming, while using only AMSU data would have resulted in six percent less warming.

In an interview with Carbon Brief, Dr. Carl Mears, a co-author of the paper and senior research scientist at RSS, explained the main changes between the v3 and v4 TLT products:

“In version 3 we overcorrected for the diurnal cycle in NOAA-15. NOAA-15 starts at 7:30 p.m. and drifts to 4:30 p.m., so it has artificial warming, and what we took out was too big. Other big differences are removing AQUA and NOAA-15, which appeared to have an evolving bias based on comparisons to other satellites, especially over oceans where we don’t expect diurnal cycle problems to be big.”

Comparisons to other satellite records

Large differences remain between groups estimating lower tropospheric temperatures from the same underlying MSU satellite data. If anything, they have diverged more in recent years. RSS shows considerably more warming in the change from version 3 to the new version 4, while UAH shows much less warming in their version 6 released last year than the prior version 5. 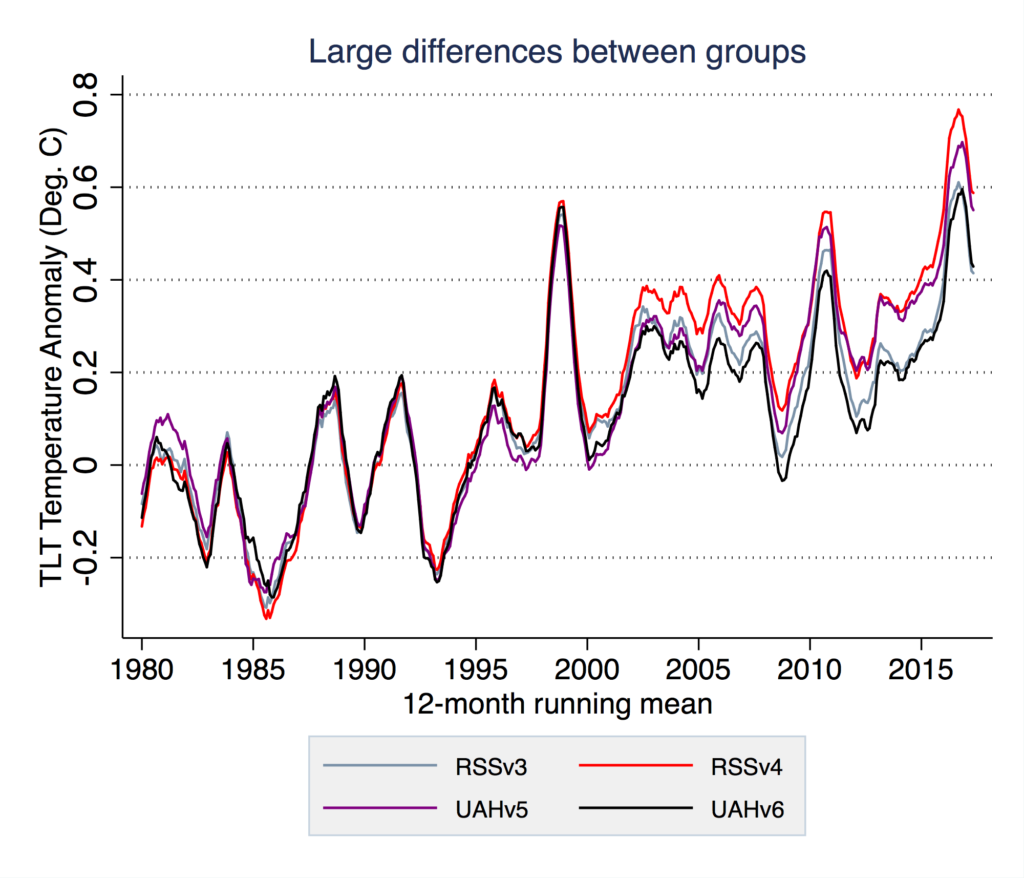 Produced by Carbon Brief using data from RSS and UAH.

These divergences suggest that there is still a lot of uncertainty surrounding satellite temperature records that needs to be resolved, as the range of reasonable assumptions for corrections can lead to large differences in results.

While the new RSS v4 record shows about five percent more warming than surface records since 1979, this behavior would to some extent be expected. Climate models on average predict around 18 percent amplification over the 1979-2016 period, though this value ranges from as low as six percent to as high as 40 percent in individual climate models. Even with these new corrections, there is evidence that the rate of warming of the troposphere is a bit lower than expected by climate models in recent years.

Surface temperature records, on the other hand, all tend to agree quite closely with each other, despite different groups using different datasets. Unlike the satellite temperature record, where only a few satellites are measuring temperatures at any given point of time, there is a large amount of redundancy in surface temperature observations, with multiple independent sets of data producing consistent results. Therefore, it is not too surprising that corrections to problems with satellite data would move them closer to surface records.

“By correctly accounting for the changes in satellite measurement times, the new satellite data are in better agreement with the surface data.”

Carbon Brief has contacted Dr. John Christy at UAH, but he says he is currently at a conference and unable to comment at present. This article will be updated should he provide any comment.