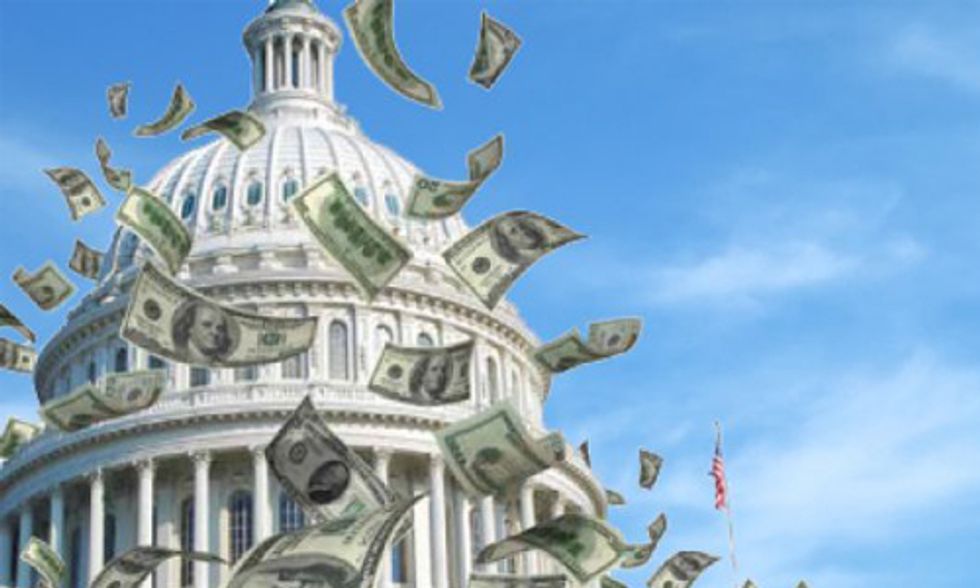 In what turned out to be a bad midterm election for the environment, climate deniers won a slew of races across the country, fueled by big spending from fossil fuel interests such as the Koch brothers. Their money overruled increasing public support for reigning in carbon-spewing industries to address climate change.

the Koch brothers conceal much of their money in so-called 501 (c) 4 organizations, a form of nonprofit that can spend unlimited amounts of "dark money" without revealing its funders.

Dirty energy money also overshadowed the heaviest pro-environmental spending yet from climate-friendly billionaire Tom Steyer and his organization NextGen Climate. Some of the media are spinning this as a big defeat for Steyer and environmentalists. But it was more a matter of more money drowning them out—and how much more is unknown. While Steyer has been open about his spending through NextGen Climate, estimated at more than $50 million, the Koch brothers conceal much of their money in so-called 501 (c) 4 organizations, a form of nonprofit that can spend unlimited amounts of "dark money" without revealing its funders.

In fact, three of the seven candidates that NextGen Climate made top priorities prevailed: Senator Jeanne Shaheen in New Hampshire, Senator-elect Gary Peters in Michigan and governor-elect Tom Wolf. Shaheen beat Scott Brown, who has changed positions on climate more often than he's changed the state he's run in. Peters squelched Terri Lynn Land who has said there should be a "debate" on the extent of human involvement in climate change and called Peters and Steyer "radical liberals." Wolf beat sitting Governor Tom Corbett who also has said climate change is a "subject of debate" and ordered references to it that he thought took a position on it deleted from a state website. Corbett is also head cheerleader for Pennsylvania's booming fracking sector.

“Whatever may have driven individual races, the American people want action on climate change," said Frances Beinecke of the Natural Resources Defense Council. "They didn’t vote to roll back foundational environmental safeguards for the sake of polluter profits. We will empower the voice of the people. We will defend clean air, safe water, healthy wildlife and fertile lands. And we’ll press for real action to protect future generations from the dangers of climate change.”

Scott edged out Democrat Charlie Crist, who committed to addressing the severe impacts climate change is having on a state exposed to rising sea levels and intense hurricanes. Scott, with the Koch-backed Americans for Prosperity investing heavily in his ground campaign, has refused to meet with scientists and even Christian evangelicals concerned about the climate.

In Maine, LePage vetoed a study on preparing the state's communities and businesses for the impacts of climate change, saying both that it's not happening and that it's actually good for Maine.

Kasich, elected in a landslide victory in Ohio, presided over the freeze on Ohio's renewable energy standards, which were passed with almost unanimous bipartisan support in 2008. It was the first rollback of clean energy standards in the country, and a bill is currently in the Ohio legislature to repeal them permanently. Kasich, with his massive support from fossil fuel interests, is almost certainly involved in the effort and will sign it, although he prefers to let the legislature take the fall, refusing public comment.

Climate denier senators-elect Cory Gardner in Colorado, Joni Ernst in Iowa, Thom Tillis in North Carolina and Shelly Moore Capito in West Virginia, as well as the reelections of fossil fuel-funded senators like Kentucky's Mitch McConnell, gave Republicans a Senate majority. That will make breaking through the gridlock to get any action on climate change infinitely tougher, with McConnell now Senate Majority Leader (assuming he's not deposed by someone more extreme, like Texas Senator Ted Cruz). With a 7 percent score from the League of Conservation Voters (LCV), $3.6 million in contributions from the fossil fuel industry and a crusade against the U.S. Environmental Protection Agency (EPA), he's a dedicated foe of the environment.

New head of the Senate Environment and Public Works Committee? Oklahoma's James Inhofe, author of The Greatest Hoax: How The Global Warming Conspiracy Threatens Your Future.

"Everything in Colorado has shifted farther to the right toward the oil and gas industry and the climate-change denial funded by millions of dollars from the Koch Brothers," said Colorado environmental activist Gary Wockner. "Most notably, Democratic U.S. Senator Mark Udall was swept out of office by Tea Partier Cory Gardner who is a 100 percent voting member of the most anti-environmental U.S. House of Representatives in history and declined to answer climate change questions during the race."

Iowa's Joni Ernst, probably the most conservative candidate elected last night, has punted on whether she believes climate change is manmade and boasts of driving an electric car. But she has vowed to work to abolish the EPA and repeal the Clean Water Act saying it was one of the most damaging laws for business. That's another measure that once had overwhelming bipartisan support and has been a huge success in cleaning up America's waterways. She replaced the retiring Tom Harkin, a strong pro-environmental vote.

But Beinecke pointed out, "Several senators won by running clean—including Jeanne Shaheen in New Hampshire, Susan Collins in Maine and Senator-elect Gary Peters in Michigan. All are climate champions. Peters took on the Koch brothers and promised Michigan voters he would fight in Congress to protect the Great Lakes from climate change.”

"The election may have changed the political dynamics in Washington, but it doesn't change the science," said Mindy Lubber, president of sustainable business group Ceres. "The reality of global warming and the need for urgent action remain an imperative. Business leaders understand this truth. Smart companies are making wise choices about their energy purchases and future operational planning in a carbon-constrained world."

Another voice for business was Rhone Resch, president and CEO of the Solar Energy Industries Association (SEIA), who urged political leaders not to leave solar behind. "It’s critically important for our leaders in Washington, as well as our state capitals, to put aside their differences and work together to find real solutions that will grow our economy and put more people to work," he said.

"As one of the fastest-growing industries in America, solar is a shining example of how stable, consistent and reliable public policies are paying huge dividends for our economy and environment. As pundits analyze the results of Tuesday’s elections, here is one important mandate to remember: Polls consistently show that 9 out of 10 Americans want to see an expanded use of solar energy nationwide.”

Michael Brune, executive director of the Sierra Club, was also undeterred. "Despite the climate movement’s significant investments and an unprecedented get out the vote program, strong voices for climate action were defeated and candidates paid for by corporate interests and bolstered by sinister voter suppression tactics won the day," he said.

"But don’t be fooled. This election marked a pivotal change in how candidates confront the climate crisis. Even the most anti-environmental candidates were compelled to greenwash their voting records and change their tune on climate denial. The climate on climate is changing. A Congress elected by corporate polluters may think it can force a polluter agenda on this country. But public support is solidly behind action to tackle the climate crisis. There is a growing movement of climate and clean energy voters that will be standing up to polluters and their political allies every step of the way."