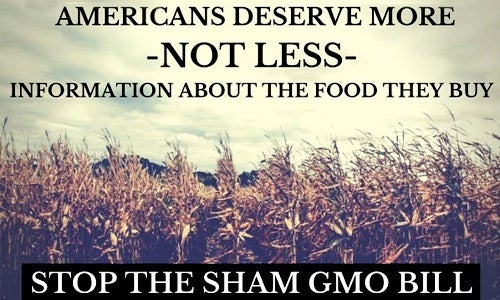 The GMO label law fight took a turn Tuesday after the Senate Agriculture Committee voted to pass the Safe and Accurate Food Labeling Act (SAFE) in a 14-6 vote.

Dubbed by opponents as the Denying Americans the Right to Know (DARK) Act, if voted into law, the bill would block states from requiring labeling on genetically modified (GMO) foods and pre-empt state laws that require labeling from going into effect—like the one taking effect in Vermont in July.

The Sen. Pat Roberts (R-Kan.)-introduced bill would establish a national voluntary labeling standard for foods made with GMOs, similar to the bill already passed in the House. Proponents of the bill—such as the Grocery Manufacturers Association (GMA), which represents more than 300 food and beverage titans—argue that a 50-state patchwork of GMO labeling policies would be costly.

The GMA, which has slapped numerous lawsuits and spent millions in lobbying against mandatory labels at the state and federal level, commended the vote.

“We thank Senator Roberts for his leadership to find a common-sense solution that now goes to the full Senate with bipartisan momentum,” said GMA president and CEO Pam Bailey, in a statement. “It is critically important that the full Senate pass this legislation as quickly as possible and for the bill to be voted on by the House. Vermont’s mandatory labeling law goes into effect on July 1, and this law could increase food costs for families across the nation by an average of $1,050 a year.”

The comment is similar to the Corn Refiners Association’s warning that GMO labeling will ultimately force manufacturers to reformulate products to non-GMO and pass on costs to consumers. “We know that we have to stop the wrecking ball. That’s the whole thing,” Roberts told reporters Monday night before the Senate Ag. vote.

Opponents, on the other hand, cite polls showing that the majority of Americans want to know if they’re eating GMOs, a right given to consumers in 64 countries around the world. Voters across the U.S. are demanding transparency in their food, as more than 30 states have introduced legislation to require GMO labels and laws passed in Vermont, Connecticut and Maine.

“The version of the DARK Act that passed the Senate Agriculture Committee today would rob Americans of their right to know what’s in their food. Nine out of ten Americans want the same rights as consumers in Russia, China and more than 60 other nations that require mandatory GMO labeling,” Scott Faber, the Environmental Working Group’s senior vice president of government affairs, said.

Faber also refuted that GMO labeling would be prohibitively expensive: “The truth is, food companies change their labels all the time to highlight innovations or make new claims. Adding a few words to the back of the package as part of a routine label change will have no impact on the cost of making food, studies show.”