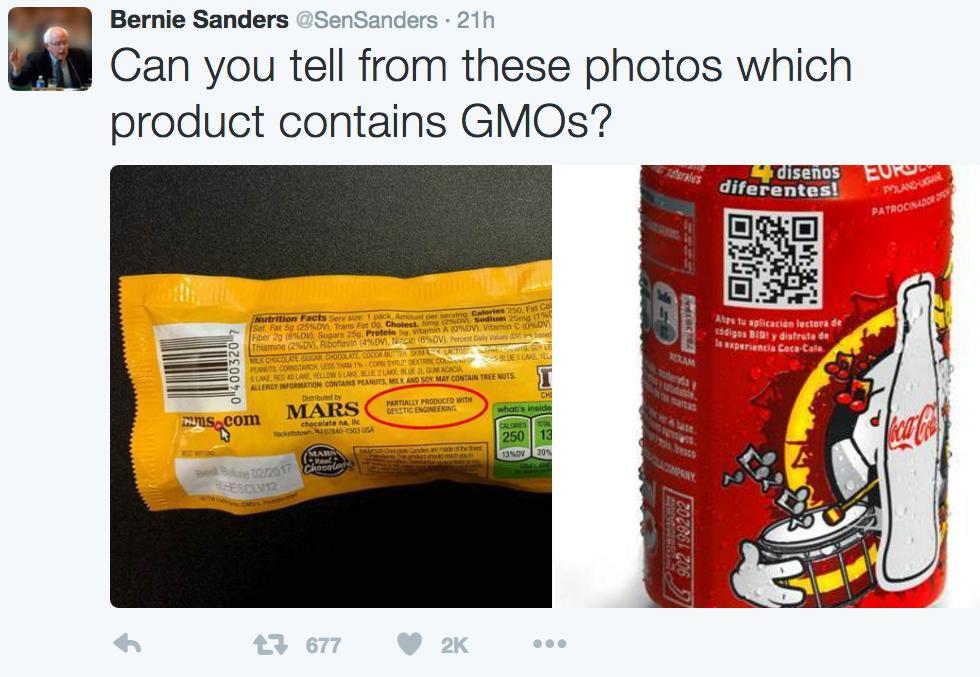 This bipartisan “compromise” bill, introduced after years of negotiations by Democrat Sen. Debbie Stabenow and Republican Sen. Pat Roberts, would require businesses to label genetically modified foods. That is, if you consider a QR code, 1-800 number or a website URL a label instead of clear, concise language that 9 out of 10 American consumers want and a number of major food companies have started doing anyway. The bill would also nullify state-by-state mandates such as Vermont’s and halt efforts by 30-odd states considering similar legislation.

The Senators’s bill is unsurprisingly backed by the very industry that produces and profits from such products, including the Grocery Manufactures Association, Monsanto, etc. Deep-pocketed food and beverage corporations have spent millions to lobby politicians and even sued Vermont to stop GMO labeling with the belief that GMO labels would scare consumers away and that a 50-state patchwork of rules would be confusing and costly.

The Senate is voting on a very bad piece of Monsanto-backed legislation today. Text GMO to 82623 to oppose it. pic.twitter.com/21yiDd5zpc

Incidentally, as Common Dreams reported, in data revealed by OpenSecrets.org and the Organic Consumers Association, the senators who voted “yea” on last week’s 68-29 preliminary vote received more than twice as much in contributions from the agriculture lobby than those who voted “No” ($867,518 for the supporters vs. $350,877 for opponents).

Opponents of the bill have dubbed it another version of the “Deny Americans the Right to Know,” or DARK Act. The earlier DARK Act, which would block state labeling laws, failed in March. The New York Times editorial board also called the latest bill “flawed,” stating:

While most scientists say that genetically modified foods do not pose a risk to human health, consumers should have a right to more information about what they are eating. Polls have found that a vast majority of Americans favor mandatory labels. Dozens of countries, including all 28 members of the European Union and Australia, already require similar disclosures.

Researchers have found that labels do not dissuade people from consuming genetically engineered food, which has been a big worry of farm groups and businesses. It is no surprise then that some companies, like Campbell Soup, have voluntarily agreed to label their products.

The biggest problem with the Senate bill is that—instead of requiring a simple label, as the Vermont law does—it would allow food companies to put the information in electronic codes that consumers would have to scan with smartphones or at scanners installed by grocery stores. The only reason to do this would be to make the information less accessible to the public.

So where does that leave us? Well, the decision means that debate is now limited to 30 hours and can withstand filibuster. The final vote could happen sometime tonight or tomorrow and would only require a simple majority, or 51 votes. Efforts by Sen. Bernie Sanders to put a hold on the bill have been quashed since the cloture vote mustered more than 60 yeas.

If the legislation clears the Senate, it would go to the Republican-controlled House of Representatives, which has historically voted against transparency after passing Rep. Mike Pompeo’s bill (H.R. 1599) last year. It would then goes to President Obama’s desk, who could sign the bill into law.

If it seems that the bill probably stands a chance, there are still a number of obstacles. As Politco’s Morning Agriculture blog reported, Roberts did not exactly celebrate the cloture vote, adding, “Strange things can happen.” For instance, on Wednesday during the cloture vote, GMO labeling advocates from the Organic Consumers Association threw $2,000 in cash from the Senate balcony to the floor. They yelled “Monsanto Money” and “Sen. Stabenow, listen to the people, not Monsanto” as the bills fell, according to The Hill.

Additionally, the Right-wing Heritage Foundation is also against the bill (basically, the foundation says even QR codes are too transparent) and have urged lawmakers to oppose the bill and warned it would key the vote as part of its legislative scorecard.

As for the House vote, even though the lower chamber already passed their own GMO bill, the Senate version is different enough that the House would have to vote on it again, as Grist noted.

The House has been urged by the Grocery Manufacturers Association and the National Council of Farmer Cooperatives to take up and pass the bill before summer recess, which starts next Friday.

A spokeswoman for House Agriculture Committee Chairman Mike Conaway told Politico that Conaway “will await the outcome in the Senate before making any public statements regarding his position on what action he believes the House should or should not take. He’s still engaged in discussions with industry and other stakeholders on the matter.”

Detractors of the bill are speaking out against further advancement of the bill. Sanders tweeted Wednesday: “The Stabenow-Roberts GMO bill is confusing, misleading and unenforceable. It does nothing to make sure consumers know what they’re eating.”

The Stabenow-Roberts GMO bill is confusing, misleading and unenforceable. It does nothing to make sure consumers know what they’re eating.

Also, as Quartz puts it, the presidential candidate also “expertly trolled” the Senators who support the bill.

The QR Code is real by the way. If you don’t have a QR scanner, the code links to a statement on Sanders’s website defending his home state’s GMO labeling law.

A number of environmental and consumer advocate groups have spoken out against the bill and the Senate vote.

“Friends of the Earth denounces the Senate’s passage of the DARK Act, S. 764, a bill which was passed under the guise of GMO labeling,” food and technology campaigner Dana Perls said. “This bill is a travesty, an undemocratic and discriminatory bill which preempts state laws, while offering no meaningful labeling for GMOs. If accepted, Americans will remain in the dark about what we feed our families. We are deeply disappointed in the members of Congress who supported this bill and who did not stand with the vast majority of Americans who want mandatory on-package GMO labeling.

“Friends of the Earth urges consumers to call on the House and President Obama to oppose any bills that would undermine state GMO labeling laws, and to only support meaningful, mandatory on-package labeling for GMO foods, including those made with new gene editing techniques.”

“[The legislation] rolls back the progress that people around the country have made to get clear, on package labeling for GMOs,” Scow said. “The bill she voted for will leave way too many Californians in the dark when it comes to knowing what’s in the food we eat and how it was produced.”

Wenonah Hauter, executive director of Food & Water Watch, said, “If this bill becomes law, the industry wins what are essentially voluntary requirements under this GMO labeling ‘compromise,’ which does not mandate recalls, penalties or fines for noncompliance with the incredibly weak requirements of the bill that will likely leave many GMO ingredients exempt from any labeling requirements.”