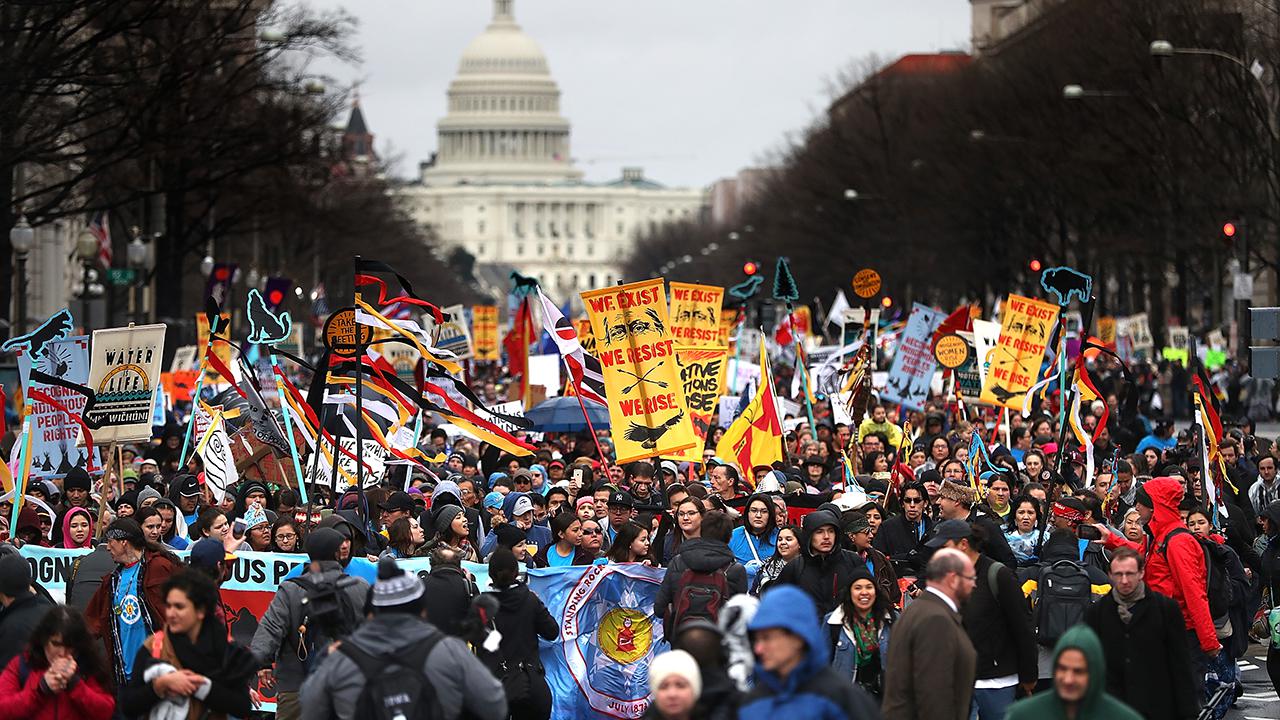 Protesters march during a demonstration against the Dakota Access Pipeline on March 10, 2017 in Washington, DC. Justin Sullivan / Getty Images

Five Democratic lawmakers on Friday encouraged President Joe Biden to order an immediate shutdown of the Dakota Access pipeline after the U.S. Court of Appeals for the D.C. Circuit last week delivered a victory to the Standing Rock Sioux Tribe by ruling that DAPL is operating illegally.

The three-judge panel upheld a lower court’s ruling that the U.S. Army Corps of Engineers (USACE) violated the National Environmental Policy Act when it granted an easement for DAPL to cross a federal reservoir along the Missouri River, less than a mile from the Standing Rock Sioux Reservation.

The court ordered a full environmental impact statement examining the threats posed by the oil pipeline. The Standing Rock Sioux Tribe, as the Democrats’ letter to Biden notes, “rightfully fears an oil spill could disproportionately affect their drinking water, as well as hunting and fishing rights.”

Standing Rock Sioux Tribe Chairman Mike Faith said in a statement that “we are pleased that the D.C. Circuit affirmed the necessity of a full environmental review, and we look forward to showing the U.S. Army Corps of Engineers why this pipeline is too dangerous to operate.”

Despite mandating the review, the panel did not order DAPL to stop operating. Jan Hasselman, the EarthJustice attorney representing Standing Rock, said after the ruling that “this pipeline is now operating illegally.”

“The appeals court put the ball squarely in the court of the Biden administration to take action,” Hasselman said. “And I mean shutting the pipeline down until this environmental review is completed.”

This would protect the rights of impacted Tribes like @StandingRockST & begin the journey toward environmental justice #NoDAPL pic.twitter.com/bgN8Ora27C

The Democrats note that Biden has taken “bold early actions … to prioritize climate action and environmental justice,” including withdrawing permits for the Keystone XL pipeline.

In addition to urging him to “build on this promising start” by shutting down DAPL during the review, they detail some of the pipeline’s history, including the “egregious environmental racism” in 2016, when “North Dakota law enforcement officials violently removed protestors from the path of DAPL, many of them from the nearby Standing Rock Sioux Tribe.”

I am joining Lakota youth’s #NODAPL challenge to demand you #shutdownDAPL. #ByeDenDAPLhttps://t.co/thA1FS6Os7

“As you consider how to proceed,” the Democrats write, “we encourage you to meet with members of the Standing Rock Sioux Tribe and other impacted tribes to better understand how the DAPL affects their lands, treaty rights, and environmental priorities.”

“By shutting down this illegal pipeline, you can continue to show your administration values the environment and the rights of Indigenous communities more than the profits of outdated fossil fuel industries,” the letter adds. “This is a critical step towards righting the wrongs of the past and setting our nation on a path of environmental, climate, and social justice.”

It's time to shut down DAPL and #BuildBackFossilFree.

As DeSmog noted Thursday, DAPL is facing more than just legal trouble: Westchester Fire Insurance Co. notified pipeline owner Energy Transfer in early January that it had lost a 0,000 “bond that Iowa, one of the four states it passes through, required the pipeline to maintain.”

The 1,172-mile underground pipeline, which began operating in June 2017, transports 570,000 barrels of oil per day from the Bakken formation in North Dakota, through South Dakota and Iowa, to a terminal in Illinois.

Attorney Carolyn Raffensperger, director of the Science and Health Network, told DeSmog it could be tricky for Energy Transfer to replace the lost insurance coverage, especially given the court-ordered review.

“It will be difficult because the bond holder will require the pipeline to comply with all legal requirements,” Raffensperger said. “If it is operating without a permit, any spill would be a big, big legal problem.”