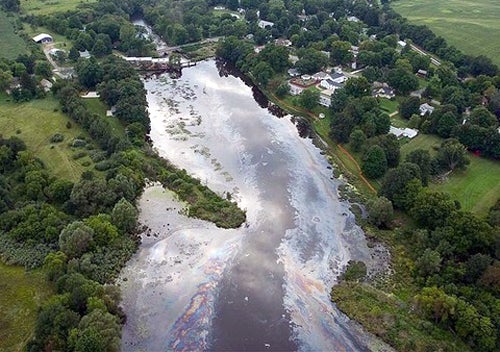 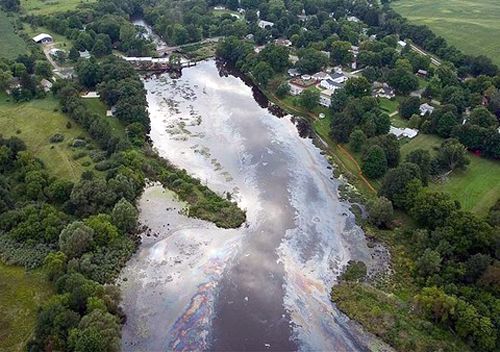 As demonstrators prepare a national remembrance of the Kalamazoo River tar sands spill tragedy, and the National Academy of Sciences hears testimony on the dangers of tar sands oil, National Wildlife Federation (NWF) has issued a report examining the practices of the company behind the spill, Enbridge, Inc. The report details Enbridge’s steady history of large spills in the U.S. and Canada, reckless expansion plans that would lead to more spills and unseemly marketing tactics used to defuse criticism. The report makes seven recommendations to prevent further tragedies.

While Enbridge recently received a record fine and a scathing condemnation from U.S. agencies for the massive oil spill of two years ago, the NWF report makes clear that the Kalamazoo disaster is but one in a series of spills, and that more will occur due to an inadequate regulatory system.

“Enbridge’s long history of pipeline spills can’t be explained by mistakes or bad luck,” said NWF Senior Vice President Jeremy Symons. “You can’t make the same mistake 800 times, but that’s how many oil spills we have seen from Enbridge pipelines. Contaminated water may be an acceptable cost of doing business to Enbridge, but we can’t afford to turn a blind eye to their irresponsible safety record.”

The report, Importing Disaster—The Anatomy of Enbridge’s Once and Future Oil Spills, says fossil fuel companies have a ‘stranglehold’ on our political establishment, preventing even modest initiatives that could make our energy safer and cleaner. That lobby strategy keeps in place a system that’s led to 804 spills by Enbridge alone in the last decade, and a total of 6,781,950 gallons of oil spilled in the U.S. and Canada.

“Rather than focus on safety and cleanup, Enbridge is recklessly moving ahead with plans to expand their pipeline network in the Great Lakes region and the Northeast, and to double down on high carbon fuel that is proving nearly impossible to clean from Michigan’s waters,” said Beth Wallace, NWF’s Great Lakes outreach advisor.

NWF’s report recommends comprehensive reforms to break the cycle of spills and pollution that continue to threaten communities and speed global warming. Among them, the report calls for stronger safety standards that account for increased dangers associated with heavy tar sands oil, increasing investment in clean energy and efficiency, and campaign and lobbying reforms that would put impacted citizens on a level playing field with Big Oil in the halls of Congress.