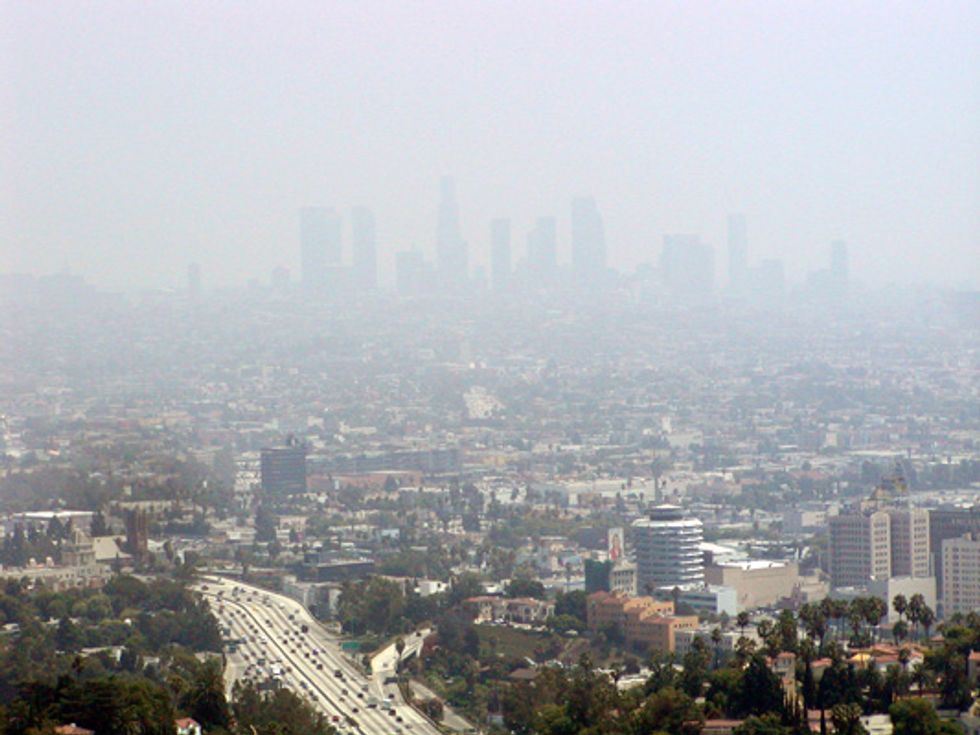 Americans should be able to breathe clean air, but pollution from power plants and vehicles puts the health of our nation at risk. Ground-level ozone, the main component of smog, is one of the most harmful and pervasive air pollutants. According to the American Lung Association, nearly half of all Americans—48 percent—still live in areas with unhealthy levels of smog pollution. Studies show that on days with high concentrations of smog pollution, children and adults suffer more asthma attacks, increased respiratory difficulty and reduced lung function. Exposure to smog pollution can exacerbate respiratory illness and cause premature death. Sensitive populations including children, the elderly and people with respiratory illness are particularly at risk.

Though air quality has improved significantly in the last decade as a result of policies at the state and federal level, there is still much to be done, as there are still millions of people living in metropolitan areas exposed to unhealthy levels of pollution. This report ranks metropolitan areas for their unhealthy air days in 2010 and 2011.

This report also presents data indicating that the problem may have been worse than we thought. Because the national health standard for smog pollution set in 2008 was set at a level that scientists agree is not protective of public health, people across the country have been exposed to days of poor air quality each summer without knowing it. We have calculated the additional days on which the air was unhealthy to breathe, according to a pollution threshold that is more consistent with what scientists say is necessary to protect public health, but because the 2008 standard was set too loosely, the public was not alerted.

The major data and findings of our report are broken down into the following categories:

Rankings of smoggiest cities across the country by population size:

State-by-state rankings of smog in 2010: Across the state of California, there were 135 days in 2010—or more than a third of the year—when at least part of the state experienced smog levels exceeding the health standard. California, Texas, Utah, Maryland, Pennsylvania, New Jersey, Ohio and New York each had at least 30 days in 2010 when part of the state experienced smog levels exceeding the health standard—as many as a month’s worth of days when breathing the air could put people’s health at risk. Seventeen states experienced at least one red alert day for unhealthy air, indicating pollution levels high enough in a particular area so that anyone could start experiencing adverse health effects. Nine states did not record any days in 2010 on which levels of smog pollution exceeded the standard: Alaska, Hawaii, Idaho, Montana, Nebraska, North Dakota, South Dakota, Vermont and Wyoming.

National rankings of the smoggiest metropolitan areas across the country in 2011, through August 21: The areas of Los Angeles-Long Beach-Riverside, Calif.; Atlanta-Sandy Springs-Gainesville, Ga. and Ala.; Fresno-Madera, Calif.; D.C.; Baltimore; New York; Newark, N.J.; Bridgeport, Conn.; and Bridgeport, Pa. were the top areas with the most smog days this past summer, through August 21, 2011.

To protect the health of our children and people across the country, many steps can be taken both at the state and federal level to reduce dangerous pollution. First, the U.S. Environmental Protection Agency (EPA) must set a national ambient air quality standard for ground-level ozone within the range of 60 to 70 parts per billion averaged over 8 hours, as unanimously recommended by the independent board of air experts and scientists created under the Clean Air Act to provide periodic review and recommendations on air quality standards. The Obama administration considered updating the 2008 standard, but decided in early September 2011 to abandon this effort and update the standard in 2013.

Pollution from cars and trucks—which accounts for a third of smog-forming nitrogen oxide emissions in the U.S.—must be cleaned up by developing cleaner and more efficient vehicles and by improving and expanding public transportation systems.

State and federal governments should accelerate the transition away from fossil fuels and toward a clean energy economy by passing policies to ensure we get more of our energy from clean, renewable sources such as wind and solar power.

Lastly, Congress should eliminate subsidies that help keep our nation dependent on polluting fossil fuels that put our health and environment at risk. Dirty energy pollutes the air we breathe, threatening our health and our environment. When power plants burn coal, oil or gas, they create the ingredients for ground-level ozone pollution, one of the main components of smog pollution. Especially on hot summer days, across wide areas of the U.S., ozone pollution reaches levels that are unhealthy to breathe, putting our lives at risk. In 2009, U.S. power plants emitted more than 1.9 million tons of ozone-forming nitrogen oxide pollution into the air.

In order to better protect public health, the U.S. EPA should issue a new air quality standard to reduce ground-level ozone pollution. To achieve these reductions in pollution, the U.S. should increase pollution control technologies for power plants and accelerate the transition to clean electricity sources, including wind and solar power. In addition, the U.S. should reduce ozone-forming pollution from mobile sources. Emissions from power plants contribute to widespread ozone pollution. More than half of the people in the United States—56 percent—live in areas with unhealthy levels of ozone.

Power plants emitted 1,927,569.3 tons of nitrogen oxide pollution—a key precursor to ozone pollution—into the environment in 2009. Emissions from power plants in just 11 states account for 50 percent of the total nitrogen oxide pollution emitted by power plants. Repeated exposure to ozone can cause permanent lung damage. According to a RAND Corporation health study—in California alone—high levels of ozone pollution contributed to nearly 30,000 emergency room visits and hospital admissions and $193 million in hospital medical care from 2005 to 2007.

Children and adults suffer more asthma attacks and increased respiratory difficulty when exposed to ozone pollution. Approximately 3.9 million children and more than 10.7 million adults with asthma live in regions with very high levels of ozone pollution. According to the United States Department of Health and Human Services, approximately 5,000 asthma-related deaths occur each year in the U.S. Children are particularly vulnerable. Children who grow up in areas with high levels of ozone pollution may develop diminished lung capacity, putting them at greater risk of lung disease later in life.

Ozone exposure can impact prenatal health, with research finding that in utero exposure to ozone is associated with lower birth weight and intrauterine growth retardation. Emission controls are helping to reduce health-threatening, ozone-forming pollution from power plants. In the last five years, thanks to standards set by the U.S. EPA, coal-fired power plants achieved reductions in their emissions of nitrogen oxides by an average of 74 percent. Overall electric-sector nitrogen oxide pollution has dropped by almost half without noticeably affecting electricity prices or the reliability of the power system. However, federal standards for ground-level ozone are not sufficiently protective of public health and power plant emissions are still too high. Research shows that the current 8-hour ground-level ozone standard of 75 parts per billion (ppb) set in March 2008 under the Bush administration leaves millions at risk. U.S. EPA analysts project that a standard in the range of 60-70 ppb would prevent as many as 12,000 premature deaths per year from heart or lung diseases, along with thousands of cases of bronchitis, asthma and nonfatal heart attacks.

More action is necessary to protect our health and environment from ground-level ozone pollution. To protect our health and our environment, the U.S. EPA should establish a national ambient air quality standard for ground-level ozone of no higher than 60 parts per billion. Power plants should continue to implement more advanced emission control technologies like selective catalytic reduction systems to reduce ozone-forming nitrogen oxide emissions, and ultimately help areas meet the U.S. EPA air quality standard.

Additionally, to help reduce pollution, state and federal governments should accelerate the transition away from fossil fuels and toward a clean energy economy. Important steps include: Establishing or increasing renewable electricity standards to ensure that at least 25 percent of U.S. electricity comes from renewable sources of energy such as wind and solar by 2025; strengthening energy efficiency standards and codes for appliances, and requiring all new buildings use zero net energy by 2030; ramping up investment in solar power through tax credits, specific solar generation targets in state renewable electricity standards, requirements for solar ready homes, rebate programs and other measures; and ending subsidies for fossil fuel industries.