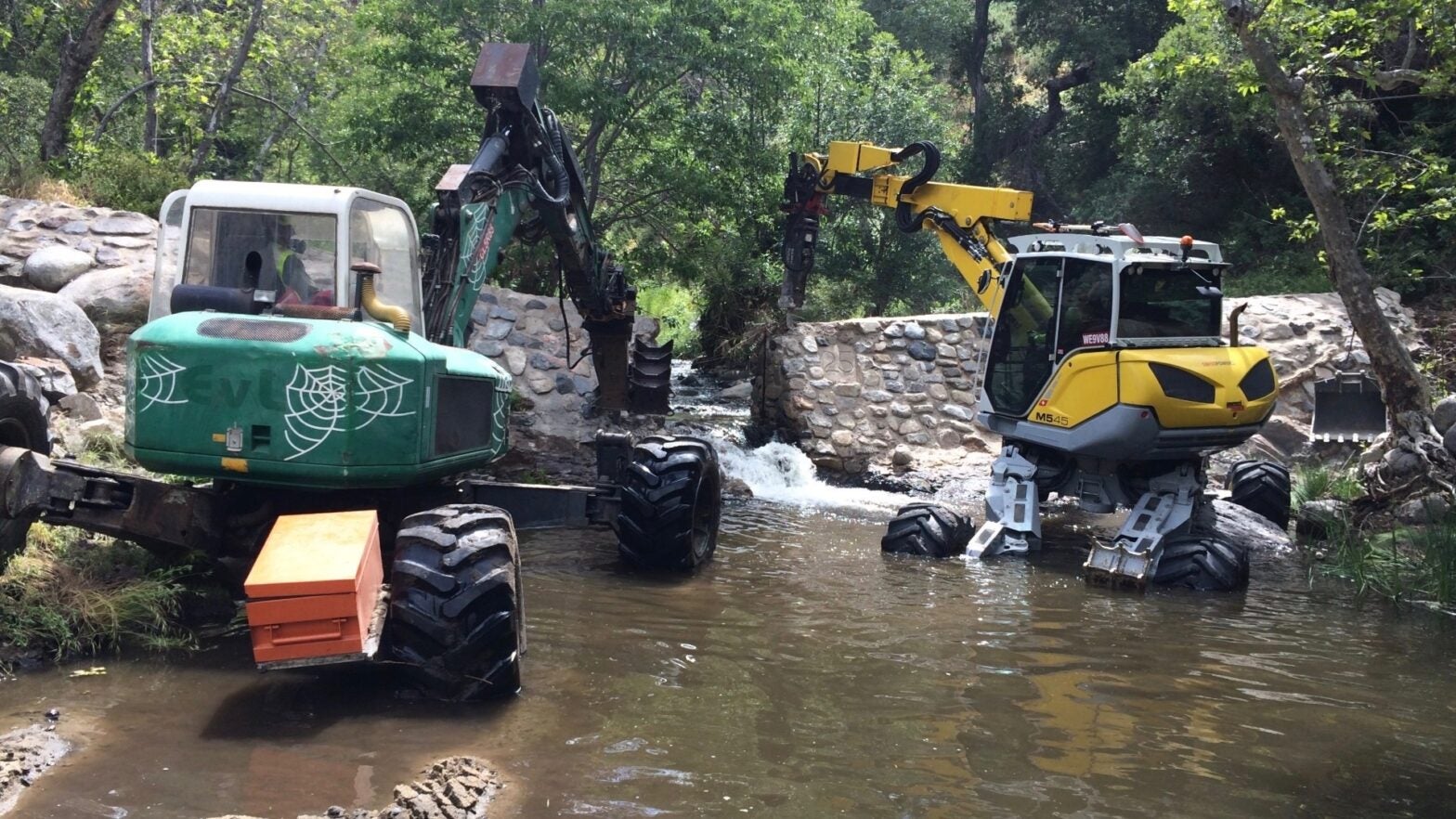 Removing one gigantic dam can have a massive effect on restoring a river ecosystem.

But bringing down more than 80 smaller dams? That can also cause a transformation.

It’s the last phase of a groundbreaking project that began more than five years ago to remove a total of 81 dams from four streams in the mountains of Orange County.

“Nobody’s really taken on a project this large and with this many partners and methods,” says Forest Service fish biologist Julie Donnell, who’s been working on the project.

The mammoth undertaking is designed to help boost populations of native aquatic species — most importantly Southern California steelhead (Oncorhynchus mykiss), which are federally listed as endangered.

It may also be a crucial learning tool due its sheer scope. Last year an estimated 90 dams were removed across the country, and nearly a quarter of those were in the Cleveland National Forest. That makes what’s happening in California the place to watch as organizations plan for other multi-dam removal efforts around the country.

“Looking at what the Forest Service did is a really smart way for other agencies to begin to think about their infrastructure,” says Serena McClain, the director of river restoration at the nonprofit American Rivers, which tracks dam-removal efforts. “The Forest Service is showing that the federal government can lead on this and demonstrate the possibility for the private sector and municipalities.”

In addition to the work in the national forest itself, the ecological success of the project hinges on a downstream effort to remove two more barriers that prevent steelhead from reaching the forest as they migrate from the ocean.

The two projects have brought together a diverse, and unlikely, coalition of transportation departments, federal agencies, environmental nonprofits, local governments, and even the U.S. Marine Corps to help complete an ocean-to-headwaters restoration of more than 35 miles.

“This addresses one of the major threats to endangered southern steelhead,” says Sandra Jacobson, the South Coast regional director of California Trout, which is leading the downstream effort. “Once you open up the rivers, it allows a tremendous change in the accessibility of steelhead to their historical habitat so that they can go in and reproduce.”

Large dam removals, like those on the Klamath River in California and Oregon, or the hotly debated Snake River dams in Washington, get lots of media attention. But smaller dam removals are quietly happening all across the country.

In the past 20 years around 1,100 dams have been removed in the United States — many of them aging, unsafe structures that had outlived their usefulness.

That’s the story in the Cleveland National Forest, too.

Not a lot is known about the early history of the dams there, but most were likely built in the 1930s by the Civilian Conservation Corps, a public work program started to help Americans rebound from the Great Depression, says Kirsten Winter, a biologist in the Cleveland National Forest who has spearheaded the dam-removal project. It’s not unusual for dams to be built in national forests, but this high a concentration of small dams may be a regional phenomenon in Southern California forests.

Most of these original dams would likely have washed away over time, but in the Cleveland National Forest, Orange County increased the size of the dams using native rock and mortar from the 1940s through the mid-1970s. Gates were lowered in the spring and raised in the fall to control the flow of the rivers. The impounded water was used mostly for fish stocking and recreation and was also available for fire suppression.

But eventually, Winter says, the dams aged, and the county got tired of maintaining them. Many washed out in storms. A few were removed in the 1980s by the county, and the gates were taken out of the remaining dams. Most fell back under Forest Service jurisdiction.

In recent years it became clear that some of the dams posed safety hazards and impeded fish migration. As part of a federal recovery effort to recover populations of endangered southern steelhead, a plan was developed to remove the 81 dams in the San Juan watershed on Upper San Juan Creek, Trabuco Creek, Holy Jim and Silverado Creek.

With that in place, the dam-removal work began in December 2014. The project has a .2 million price tag, but the majority of funding hasn’t come from the Forest Service itself.

Before and after dam removal on San Juan Creek in the Cleveland National Forest. Julie Donnell / USFS

The project has generated a lot of interest and a diverse array of partners, including California Department of Transportation, Federal Highways Administration, Orange County Parks, Orange County Transportation Authority, the U.S. Fish and Wildlife Service, California Department of Fish and Wildlife, and the U.S. Marine Corps. The coalition has brought funds, organizational support, technical knowledge and a lot of energy to the process.

Despite all the partners, it’s still been a learning experience, she adds, because the dams vary so much in size and accessibility. Some are just a few feet high and 10 feet wide. Others reach 14 feet in height and stretch up to 100 feet across.

To breach the dams and break apart the mortar, crews employed a wide range of techniques. For sites near roads, they bought in conventional excavators. Steeper canyons required the use of a nimble “spider” excavator. Explosives took down a few dams where appropriate, while other places required sledgehammers and jackhammers. An extra bit of muscle (organizational and otherwise) came from a partnership with Marines from nearby Camp Pendleton. Corps members have helped remove 31 dams since 2018.

The biggest benefactors of the dam removals in the Cleveland National Forest will be steelhead — a type of salmonid. Like salmon, steelhead are anadromous, spending their time in both freshwater streams and the ocean. But unlike salmon that return to their natal headwater streams to spawn and die, steelhead will often spawn more than once.

They’re also a key indicator species, says Jacobson. “When they disappear, that means there are probably multiple issues within a watershed.”

In the San Juan, dams are one of them. 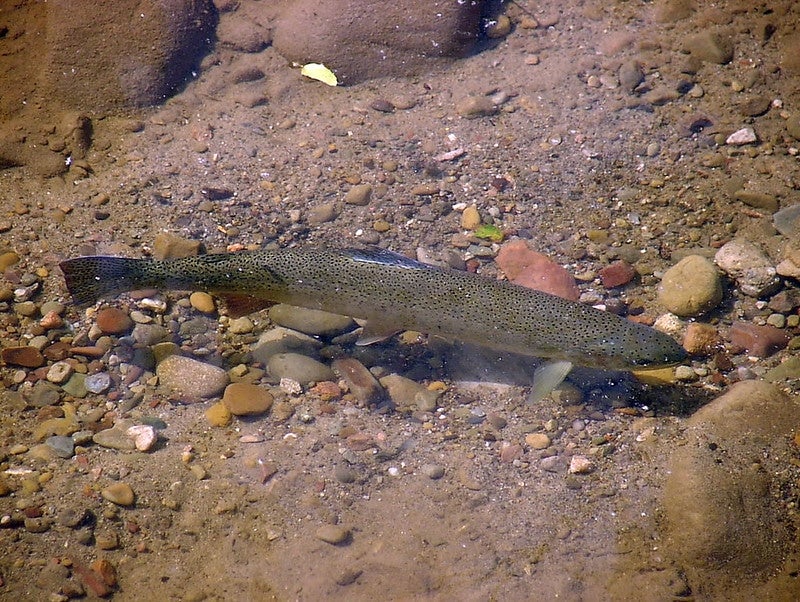 “Dams create a very artificial situation,” says Winter. “It’s not just that they hold water, but they retain sediment and then they create these weird splash pools below.”

Without the dams, the streams are able to create a more natural gradient and pool structure. That’s good for other native wildlife like the arroyo toad and the arroyo chub, both federally listed as endangered, as well as the California newt, a California Species of Special Concern.

While the process of removing the dams can be a bit messy, “we’ve seen no negative effects to the habitat or to species due to the dam removal,” says Donnell.

One of the biggest concerns with any dam removal is ensuring that any trapped sediment released from behind the structures doesn’t cause ecological problems as it moves downstream. But Donnell says they’ve timed the removals to account for that and the streams naturally carry large sediment loads during storm events.

“We’re actually doing some of dams in phases rather than all at one time because of the sediment load that’s being held behind them,” she says.

In areas where dams have been removed, Donnell has already noticed an improvement. “The bedload and sediment transport have been able to naturally flow once again,” she says. “And the channel is starting to adjust back to a natural state.”

As groundbreaking as the Cleveland National Forest’s efforts are, the benefits for steelhead hinge on the downstream initiative.

A quarter-mile-long concrete flood-control channel runs underneath five bridges, including the north- and southbound lanes of Interstate 5. The drop and the speed of water flowing through the hardened channel inhibits steelhead from making it through the gauntlet.

The second barrier sits a half-mile downstream, where another 20-foot drop under a bridge for the Metrolink regional railway poses an insurmountable roadblock for steelhead.

To solve both of these problems, California Trout is leading the multiagency design effort for a technical fish passage that will enable steelhead to navigate these obstacles using staggered weirs. At the I-5 obstacle, an additional fish transport channel will provide steelhead with an express lane to avoid the flood control channel and pass under the array of bridges.

The organization is working with fellow nonprofit Trout Unlimited, as well as Orange County’s flood control district and public works office, the city of San Juan Capistrano, California Department of Transportation, and the Metrolink railroad association.

“We just received funding to complete the design,” says Jacobson. The fish passages are expected to be completed around 2023 to 2025.

It’s one part of a larger regional effort by the South Coast Steelhead Coalition, which consists of more than 35 organizations working to recover stable populations of the species in Southern California. Removing barriers to fish passage is a key element of the strategy, as are ensuring adequate water quantity and quality and removing nonnative species that compete for limited resources.

But there’s one more objective: helping native rainbow trout. These resident trout are the same species as steelhead, but with a different life history — they don’t migrate to the ocean. Since steelhead have been blocked from the upstream waters for nearly a century, resident trout populations have suffered from genetic isolation.

Only two resident trout populations remained in the region and one had to be emergency evacuated by a bucket brigade following the Holy Fire in 2018, which burned across the forest and threatened the water quality in the streams.

The removal of all the stream barriers — on and off the forest — will provide an opportunity for aquatic species to be more resilient. The wildfire is a perfect example of why that’s needed, says Jacobson.

“It really gives the aquatic species the mobility they need to move around in response to drought, floods and wildfires,” she says. “It’s good for all sorts of species, too, not just fish.”

With the dam removals in the Cleveland National Forest nearing completion, Donnell says she’s hoping to soon begin presenting her data and methodologies so others can learn from the project.

“We’ve definitely heard from other forests and other districts wanting to know how we went about it, because this is new,” she says.

McClain says American Rivers has been sharing the project’s success story because it’s a good example of how to think holistically about managing water and restoration opportunities for aquatic ecosystems. 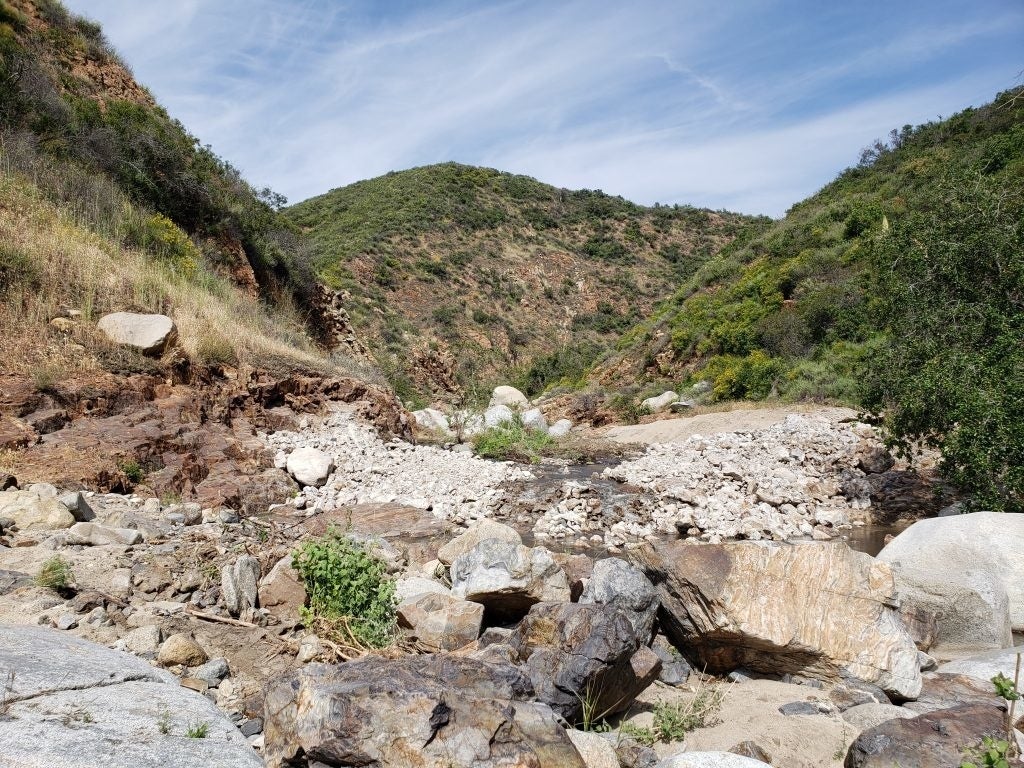 “Even from a federal budget management perspective, we should be looking at where there may be projects on the federal books that are no longer serving a purpose,” she says.

Thanks to the coordinated efforts in the San Juan watershed, southern steelhead will have a better chance of survival. But efforts to try and aid their recovery also have a larger benefit.

“We’re not only restoring their environment, but also ours,” Jacobson says. “We’re actually improving the rivers overall.”

And in the process, they may have established a model for mass dam removal across the country.