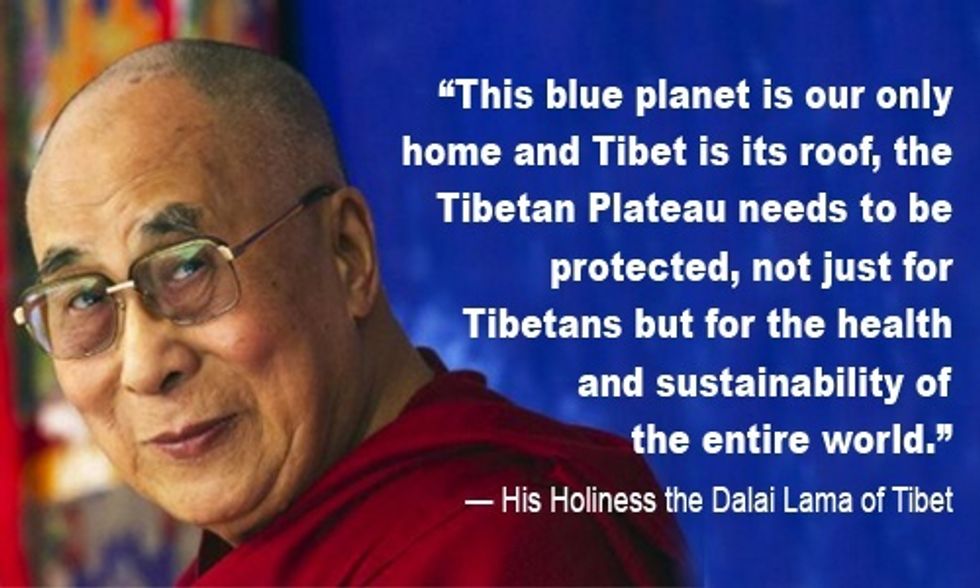 The Dalai Lama urged strong climate action today "to limit global warming and to protect fragile environments, including the Himalayan glaciers and Tibetan plateau," reports the AP. As world leaders prepare to meet in Paris for the COP21 UN Climate Change Summit, the Dalai Lama created a video message for the world.

"This is not a question of one nation or two nations. This is a question of humanity. Our world is our home," the Dalai Lama told AP. "There's no other planet where we may move or shift."

"Temperatures for Tibet's high-altitude plateau—referred to as the Roof of the World—are rising about three times faster than the global average, and are 1.3 degrees Celsius higher than they were 50 years ago," reports AP. The Tibetan plateau is also referred to as the Third Pole because it has the largest store of ice outside of the North and South poles, according to Reuters.

The importance of the Tibetan plateau cannot be understated, "with some 40 percent of the world's freshwater locked into the frozen Himalayan glaciers and feeding seven major rivers that run through China, Nepal, India, Pakistan and Bangladesh," says AP. The Dalai Lama told Reuters that "two-thirds of the glaciers in their mountain homeland may disappear by 2050."

The Tibetan spiritual leader also took the opportunity to plea for a "say in the talks," according to the AP. The exiled government will send its own delegates to the Paris talks, but it will not have a vote because it is not recognized as an independent nation.

Just as Pope Francis has ramped up his calls to address climate change—especially during his visit to the U.S. last month—the Dalai Lama has also become an outspoken advocate for climate action. In June, the Dalai Lama endorsed the Pope’s encyclical on climate change.