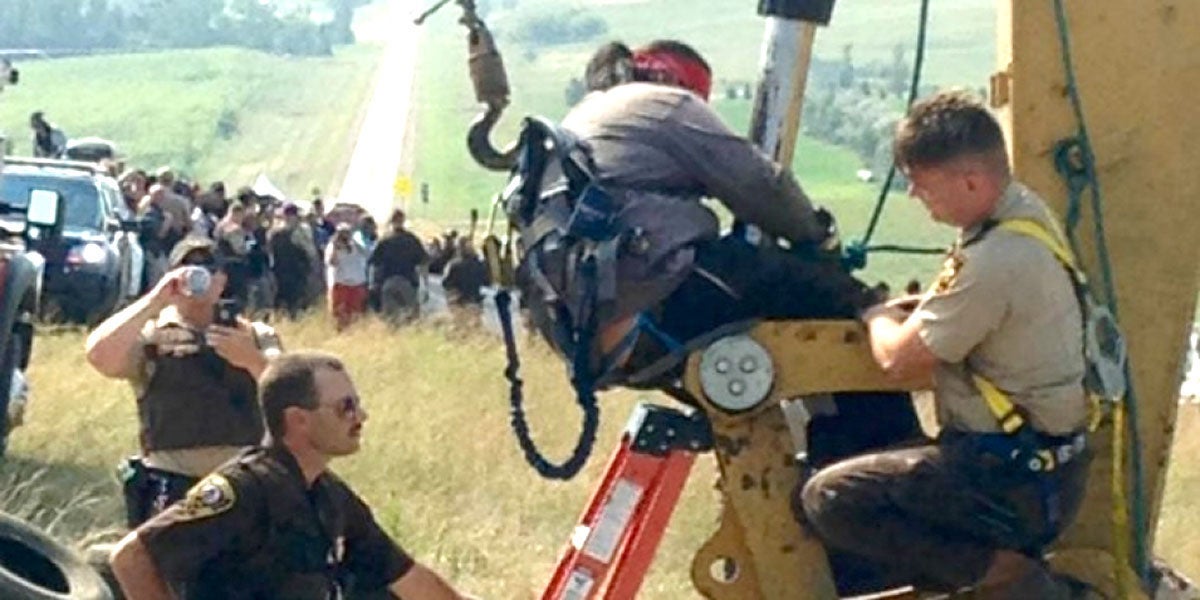 As a temporary restraining order that halts construction on part of the Dakota Access Pipeline was issued Tuesday, about 100 people again shut down construction on another part of the pipeline by obstructing equipment. Some of them locked themselves to the heavy machinery. Native Americans from across the U.S. and Canada continue to arrive at the resistance camps.

We speak with Tara Houska, national campaigns director for Honor the Earth.

Juan González: As the ruling was issued in Washington, DC, about 100 land defenders shut down construction on the Dakota Access Pipeline by obstructing equipment. Some of them locked themselves to workers’ heavy machinery. We go now to North Dakota to get reaction on the lawsuit and on the actions on the ground.

Amy Goodman: Tara Houska is with us. She’s national campaigns director for Honor the Earth.

Tara, welcome to Democracy Now! Can you talk about the reaction on the ground to the court decision? And then, what exactly happened in that protest yesterday?

Tara Houska: It was really disappointing. You know, there—we were really hoping that the judge would see that there was this filing on Friday that detailed all these different sacred sites that were in the pipeline’s path and then the company went out on Saturday and destroyed those sites. It was very clearly a situation in which a temporary restraining order to actually stop that construction and prevent such violent altercations from occurring—I mean, the security company actually turned dogs on Native American people protecting sacred sites. It’s incredibly disappointing to see that the court system did not continue to protect our interests and stop this from happening, while we’re waiting to see what this injunction is ruled upon. 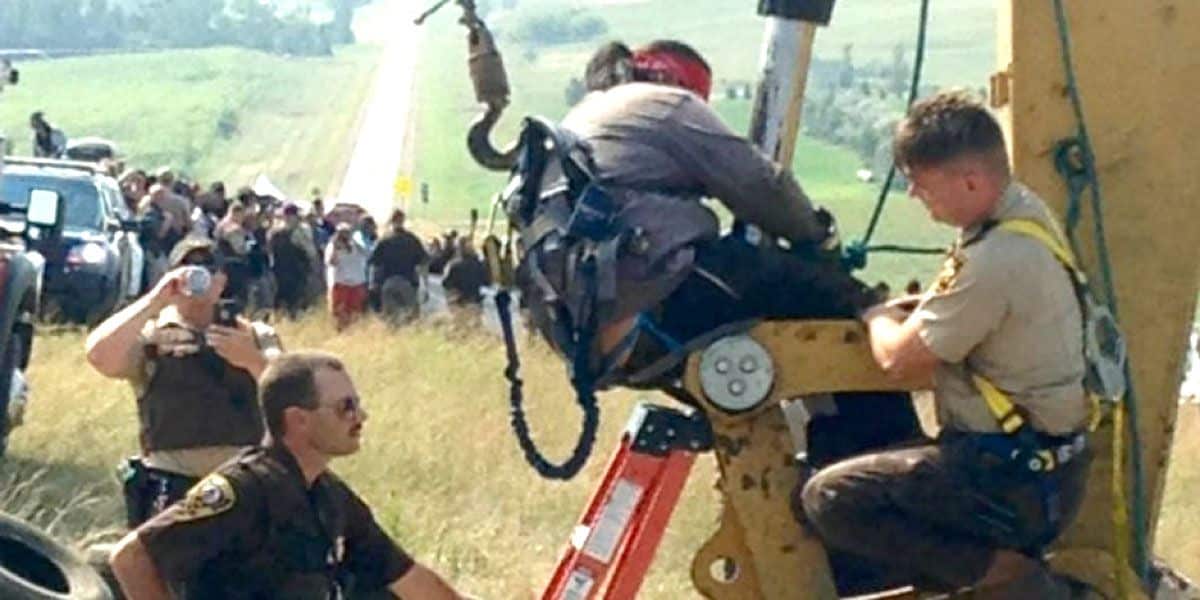 “I am here to protect the water for the children … and to protect our ways of life,” said Iyuskin American Horse of the Rosebud Sioux Tribe, who was arrested Aug. 31.Earthjustice / Twitter

Juan González: And, Tara, your reaction to the response of Native Americans around the country who have now flocked to the Dakota area to participate in these protests?

Tara Houska: I mean, I think, you know, folks are still pouring in. The camp grows every single day, that, you know, people know they’re coming from around the country to defend this river and also to take a stand for indigenous rights. We’ve seen some pretty serious human rights violations as this process has gone on. The state of North Dakota took the water supplies from the camp. They took medical supplies. They have put up a blockade, preventing—you know, making it very, very difficult to actually get into the reservation. This is occurring, and no one’s really covering that issue, and no one is really seeming to care. And, you know, indigenous people all know that this is going on. I mean, while those dogs were—those private security dogs protecting an easement, while that was happening, there were North Dakota police standing there, not doing anything. We’re citizens, too, just like everyone else. And so, this has become a moment in history in which we’re standing up for the environment, for our children, for the river, for the drinking water and also just—and generally for the upholding of treaty rights and human rights.

Amy Goodman: Now, we wanted to ask about this protest. One of those who participated in the protest, who locked down, was Victor Puertas. We saw him on Saturday. We interviewed him because one of the dogs bit him on his arm and we showed that image. For people to see the whole attack on Saturday, you can go online at democracynow.org. But his arm clearly showed bite marks. Can you talk about exactly what they did yesterday?

Tara Houska: Yeah. Yesterday, there was a direct action, a nonviolent direct action, in which, you know, the location of construction was discovered. And, you know, about a hundred people just hopped in their cars and went over there and locked onto the equipment to prevent active construction from occurring. I think it’s worth noting that the company voluntarily, you know, said that they would cease construction up until the point of the injunction. That clearly has not happened. Active construction has still been occurring throughout this entire process. And the land defenders here know that. They know that we know that, that this is obviously not being upheld and not being fully acknowledged. And yesterday, we went on site and, you know, there were folks that were willing to lock themselves to machines to stop this construction and prevent the pipeline from going in.

Amy Goodman: I wanted to play a clip of Victor Puertas from Saturday, the different action, right after he was attacked.

Victor Puertas: Look at this. A dog—

Victor Puertas: Over there, with that dog. I was like walking. Throwed the dog on me and straight, even without any warning. You know? Look at this. Look at this.

Amy Goodman: That dog bit you?

Victor Puertas: Yeah, the dog did it, you know? Look at this. It’s there. It’s all bleeding.

Amy Goodman: So, that’s Victor Puertas with the dog bite on his arm and he, with Jules [Richards], were two who locked down.

Juan González: Tara, what’s been the—what was the response yesterday of the security guards and the company to your protest? Was it markedly different from Saturday?

Tara Houska: It was markedly different. The police officers, for one, actually came on site initially, kind of stood around and took pictures of our—took pictures of people’s faces and generally didn’t really do much and then ended up actually leaving. I think there’s a realization that the use of dogs on Native Americans protecting their treaty lands and their sacred sites is actually a really bad PR move, that they know that the world is watching as these gross violations of human rights are occurring. And so, there was a very big sense of “we’re going to back off.” And they really did not engage at all yesterday.