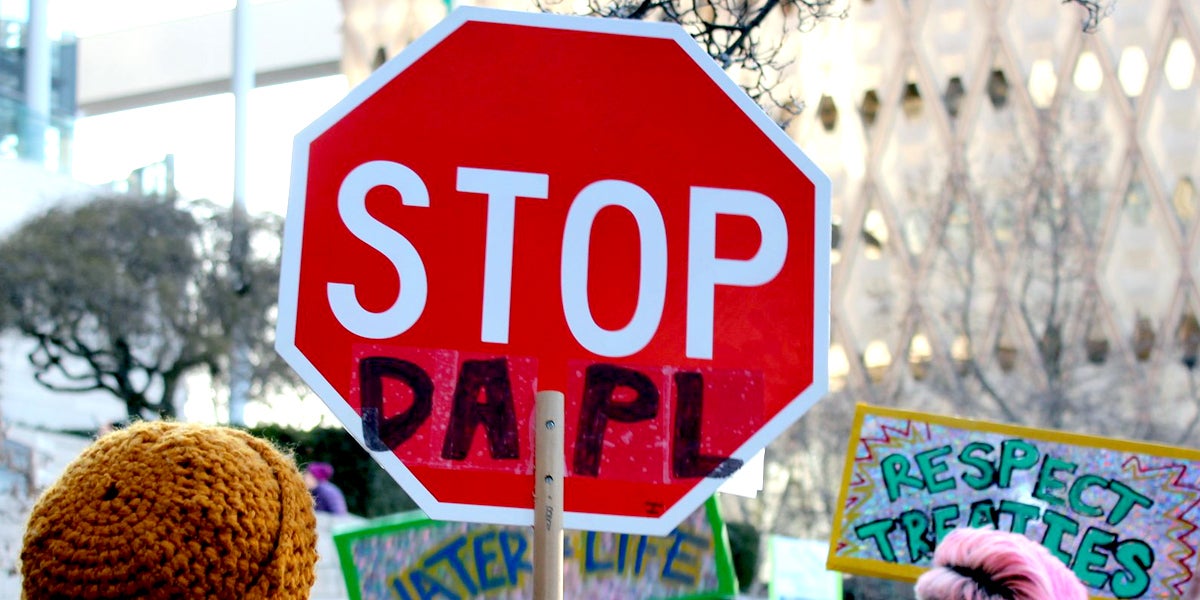 The Trump administration “will be held accountable in court” for its decision to grant the final easement on the Dakota Access Pipeline (DAPL), Indigenous people and environmental allies vowed Tuesday.

And with actions planned nationwide on Wednesday, the administration won’t get off in the court of public opinion, either.

“The drinking water of millions of Americans is now at risk,” said Dave Archambault II, chairman of the Standing Rock Sioux tribe, following the U.S. Army Corps of Engineers’ announcement that it would give the official go-ahead within 24 hours. “We are a sovereign nation and we will fight to protect our water and sacred places from the brazen private interests trying to push this pipeline through to benefit a few wealthy Americans with financial ties to the Trump administration.”

“Trump’s reversal of that decision continues a historic pattern of broken promises to Indian tribes and unlawful violation of treaty rights,” added Jan Hasselman of Earthjustice, lead attorney for the tribe. “They will be held accountable in court.”

Other next steps, according to the Standing Rock statement, include asking the court for DAPL-operator Energy Transfer Partners “to disclose its oil spill and risk assessment records for full transparency and review by the public” and, “if DAPL is successful in constructing and operating the pipeline, the tribe will seek to shut the pipeline operations down.”

The tribe is not alone in its outrage. Multiple environmental groups voiced their opposition to the decision, while Democratic members of the House and Senate natural resources committees wrote a letter to President Donald Trump expressing their own dismay.

“This blatant disregard for federal law and our country’s treaty and trust responsibilities to Native American tribes is unacceptable,” the lawmakers wrote.

“We strongly oppose this decision and any efforts to undermine tribal rights. We urge you to immediately reverse this decision and follow the appropriate procedures required for tribal consultation, environmental law, and due process.” Signatories included Sens. Maria Cantwell (D-Wash.), Bernie Sanders (I-Vt.) and Catherine Cortez Masto (D-Nev.), as well as Reps. Raúl Grijalva (D-Ariz.) and Donald Beyer (D-Va.).

Grijalva, ranking member of the House Natural Resources Committee, also issued a separate statement: “Before the Women’s March and before thousands of people protested at airports, the Standing Rock Sioux and their allies were camping in the freezing cold to defend their rights,” he said.

“The Obama administration heard those concerns and agreed to take a step back; this administration is ignoring them. In his first few weeks in office our new president has built a resume of discrimination, falsehoods and sloppy work, and now the decision to trample the sovereignty of our First Americans is the latest entry on a growing list of shameful actions.”

A protest in front of the White House is planned for 5 p.m. Wednesday, along with more than 30 actions taking place around the country on what the Indigenous Coalition at Standing Rock has dubbed “an international day of emergency actions to disrupt business as usual and unleash a global intersectional resistance to fossil fuels and fascism.”

“This is the #NoDAPL last stand,” the group declared online.

Find an action near you here.

“Donald Trump will not build his Dakota Access Pipeline without a fight,” said Tom Goldtooth of the Indigenous Environmental Network. “The granting of an easement, without any environmental review or tribal consultation, is not the end of this fight—it is the new beginning. Expect mass resistance far beyond what Trump has seen so far.”

The granting of this easement goes against protocol, it goes against legal process, it disregards more than 100,000 comments already submitted as part of the not-yet-completed environmental review process—all for the sake of Donald Trump’s billionaire big oil cronies. And, it goes against the treaty rights of the entire Seven Councils Fires of the Sioux Nations.

Donald Trump has not met with a single Native nation since taking office. Our tribal nations and Indigenous grassroots peoples on the frontlines have had no input on this process. We support the Standing Rock Sioux tribe and stand with them at this troubling time.

In addition, a Native Nations March on Washington is in the works for March 10. “Our fight is no longer at the North Dakota site itself,” said Archambault. “Our fight is with Congress and the Trump administration. Meet us in Washington on March 10.”

An energetic divestment campaign, urging banks to pull their funding for the controversial project, is also gaining steam.

On that front, the Seattle City Council voted 9-0 on Tuesday to cut banking ties with Wells Fargo because of its role as a DAPL lender. “People might argue that Seattle’s $3 billion account is just a blip on the radar for Wells Fargo, but this movement is poised to scale up,” Hugh MacMillan, a senior researcher at Food & Water Watch, told YES! Magazine. “I think you’ll see more cities following Seattle’s lead.”